With the increasing time you spend at traffic signals in Bengaluru, you only think about one government department — Traffic Department. You may hail them or curse them, but they are on their toes to help the city de-congest.

Though the department is approached for approval of all infrastructure projects, there is no authority to it. Limited roads, which are always in a bad state are the biggest hurdle the department faces while struggling to keep the city traffic smooth. 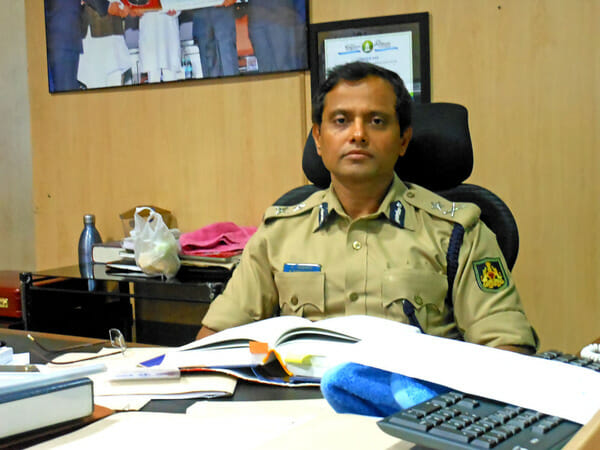 What do you think are the challenges for the traffic department?

The major problem is the number of vehicles burgeoning on the roads. We already have 45 lakh vehicles registered in the Bangalore city. To add to it, we have several vehicles coming from outside, whereas the capacity of the roads is limited. To manage this is a very big task for us.

Positive side is that, Traffic Department has implemented various technologies to handle traffic long back. However, maintaining these systems is another big challenge. Lot of  issues  like connectivity problems, maintaining  the surveillance cameras and managing them come in our way.

The ratio of vehicles over availability of roads has been debated for long, but no action has been taken towards it, why? What do you recommend?

Restricting registration of vehicles is a policy decision which should be taken at the government level and not at our level. It is a debatable topic. But there are other means to ease this problem like imposing congestion tax, car pooling and increasing our public transport facility.

Many western countries make use of congestion tax in specific zones. This tax is imposed on vehicles that move within central business zone. This may bring down the use of vehicles in the city.

Our public transport system needs to be improved too. Buses and Metro should be put into action as soon as possible.

Does anyone consult Traffic Department before approving any infrastructure, road-widening or restructuring project?

Yes, we are consulted before any infrastructure project is carried out. We all (the concerned department and the agencies) sit together to discuss the project and finalise it.

Do you scrutinise the traffic study reports? Does Traffic Department have enough power to stand against a project if it might lead to chaos in traffic, either during construction, or afterwards?

We definitely scrutinise the reports. But the decisions are not taken single-handedly. It has to be a joint decision between us and the various departments. Signal-free corridors and other road-related projects are important to ease the traffic, and Traffic Department has a say in it. Last week Home Minister called a meeting where short term and long term projects were discussed in detail, and what action is required and how.

Construction of five signal-free corridor is proposed on the most heavily trafficked areas. How are you planning to divert the traffic once the construction starts?

Not five – totally 9 corridors  are proposed. Five by BBMP and the rest by BDA. All these are long term projects which will help decongest traffic in future. Bangalore city has 7 to 8 major traffic pain points. They create problem for people to enter into the city from far off places.  Jayadeva to Silk Board is one of them. An elevated road and Metro has been sanctioned by the government whose implementation itself is a big challenge.

An elevated road is proposed to come up at Jayadeva junction. Already we have three levels of road at the junction an underpass, flyover and a usual road. How do you plan to manage traffic at this spot, when the construction starts?

At present, we have not planned on how to divert the traffic, that time has not yet come. These projects are still in the paper stage. When it comes to execution stage, we will plan necessary diversions.

For short term, some things are already done. Two or three signals are there with minor modifications on flow of traffic. We’re also thinking of other measures to be implemented. A lot of private buses operate in these areas, we want to limit the operation of private buses.

We are yet to plan diversion for the this project.

Lollipop man to help kids cross the roads
Lollipop Man, an experimental initiative by the Traffic Department, is a programme aimed to ensure safe crossing of roads for kids, near schools. Lollipop man is a volunteer, trained by the Traffic Department who manages crossing of the roads outside school. Dressed in reflecting orange or yellow clothes, he or she holds a stop board high. Once the traffic stops, kids from the school cross the road without any hassle. Such an initiative is already implemented near Bishop Cottons Girls School and has received applaud and suggestions on the Traffic Department facebook page.

What’s your traffic plan during the construction stages of upcoming Okulipuram 8-lane project?

I am not sure about it. It may be done phase by phase.

Given the kind of red alerts the city is on, how many surveillance cameras have been installed by the Traffic Department? How efficiently are they monitoring the city? Is anyone checking if all CCTVs are functioning?

We have installed 175 surveillance cameras. Another 100 cameras are in the tendering process. All of them are very well-connected and networked to our control room where we receive live feeds. It is monitored regularly and enforced too.

But the Traffic Department statistics from the past show that 219 surveillance cameras are affixed and put into use, where have the rest disappeared?

Some of them have been removed because of Metro construction. At present we only have 175 cameras.

Any new plans to improve the city traffic?

There a lot of plans set up. Public eye campaign is one among them. We want to popularise it. Anyone can help us fine and traffic violation by just clicking a photo.

If someone finds a person without helmet, he or she can click a picture and upload it onto our website. However the picture must have other necessary details like date and time, registration number of vehicle and the location. If all these parameters are available, we can easily draw a chalan and send it to the violator.

This campaign was launched long back , but it was not public-friendly. Now we have come up with a mobile app that enables easy clicking of pictures with details and also eases the task of uploading of photos onto our website.

We will soon install GPRS system to ambulances that will facilitate their smooth movement in the traffic. As soon as the GPRS-fitted ambulance closes the traffic signal the sensors attached to the traffic signal post will detect it and automatically turn the signal to green. However this plan depends on the Health department as all the 108 Ambulances are with them. This is our priority, but it needs to be tested.

Citizens allege that the traffic police officer at the pre-paid rickshaw stand partner with auto drivers and charge extra to facilitate their own commission. What do you think about this?

This is completely false. I haven’t received any such complaints. The only complaints that we have received are on auto drivers who refuse to take passengers and charge extra. But this what you just mentioned I haven’t come across.

What do you have to say about your facebook page initiative? How’s the response? Do you register complaints directly from FB page input?

It was just started one and half or two years ago. As compared to other government department’s FB pages, interaction on our website is higher. We consider all suggestions made on the page and also take actions immediately.

What is your opinion over the functioning of Traffic Department. Is it doing great? Does it require any modifications?

Traffic is dynamic, it keeps changing each day. There are lot of proposals to ease the vehicular tension and to create traffic sense among the people. We are using home guards to manage the chaos in the city. We have already established traffic training institute called BTI at Utility Building. It conducts regular programs for the traffic officers. Traffic officials from all over state have started attending these workshops. In couple of months, another training centre will come up at Tanisandra.

Locals join hands to bring the lake back to life. After months of hardwork, they are enjoying the benefits.

In Bengaluru, food packaging dominated the plastic waste list, followed by other packaging material and. household and personal care products.