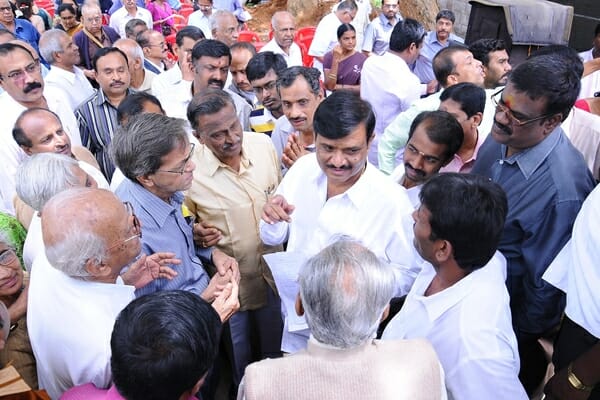 Rajarajeshwari Nagar MLA Muniratna met more than 350 property owners of the Sachidananda Nagara Lay Out in Rajarajeshwari Nagara, on August 4th 2013, Sunday morning. The meeting was arranged by Sachidnanada Nagara Nyayapara Andolana, (SNNA), a registered society, that is fighting to get khatas, building plans and layout facilities without paying a single penny as bribe to any of the public officials.

SNNA movement started almost three years ago by a group of determined site owners who opposed paying bribes, and got the khatas and all other statutory papers from BBMP through Lokayukta, RTI and Gandhigiri. However, this successful movement was hindered allegedly by the interference of a few politicians and a few BBMP Officials.

Shankara Prasad, one of the members of the SNNA movement explained to Muniratna how the BBMP officials avoided implementing Supreme Court order and Lokayukta order; and how they have even stopped electricity supply from BESCOM and threatened to stop the BWSSB water supply. Prasad also informed how the local welfare association was acting like a conduit for collecting bribe money to pay politicians and bureaucrats.

– He was the class-I BBMP contractor who built the wall on Bellary Road that crashed on a 17-year-old college-going girl Sanjana Singh killing her. Gopalaswamy committee report indicted him of carrying out poor quality work in the construction of the wall.

– He was elected as a BBMP councillor from Yeshwanthpur, from Congress Party.

– He got arrested and bailed out, during election campaign period, for threatening election officials.

– He contested elections from Rajarajeshwari Nagar constituency and got elected as MLA.

Uday Shankara Bhat, one of the key forces behind the SNNA movement, gave a five-point program for implementation by the new MLA, Muniratna. He said that immediate action is required in the following areas.

MLA Muniratna assured that he will speak to BBMP Joint Commissioner, BESCOM Chief Engineer, BWSSB authorities and the police and resolve most of the issues in the next few weeks.

Muniratna also commented on the apathy of citizens in not removing non-performing elected officials, and gave the example of how Rajarajeshwari Nagar, ward 160 had voted for BJP candidate in large numbers in spite of poor performance. He spoke about his humble beginnings as an idli seller in Malleswaram, and his ‘corruption-free’ approach in public life. Muniratna explained that his main motive for being in politics is to do ‘seva’ to people. He also appreciated the way SNNA is forthcoming in publicly discussing the issue of corruption, as well as taking remedial measures.

SNNA members appreciated the hopeful message of MLA, and are eagerly waiting to see the outcome of his promises.

The mild showers are bringing in some films too, this season. Two film festivals with over 30 films wait for film lovers.

Citizen should be ruler; Govt, the servant

Prof. Rajeev Gowda, Chairperson of Centre for Public Policy, Indian Institute of Management, Bangalore, shares his vision for the government with Citizen Matters.