Thousands of dogs serve our country as part of the Indian Army, the Police, the Railway Police Force, CISF, etc. About 1,200 serve in just the Army. At VOSD (The Voice of Stray Dogs), we call them Patriot Dogs. We have been keeping these dogs discharged by the Karnataka, Kerala, and Railway Police Forces among others. 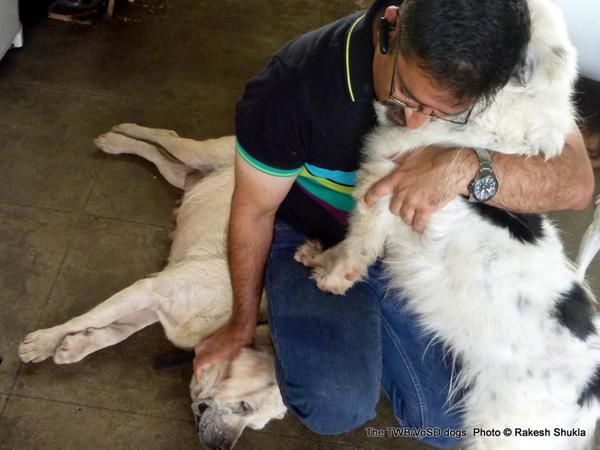 Patriot Dogs are trained in various specialties like explosive detection, tracking down insurgents or terrorists, and mounting massive search-and-rescues. From the tender age of just two months, they serve our country through the prime of their lives – usually 8-10 years. It’s a sad fact that till recently, they were euthanised at the end of their service.

At the end of 2015, the courts put a stop to this tragic practice, but the concern remains the same. Where will these dogs go when they can no longer serve?

Patriot Dogs don’t enlist in the military, paramilitary and police but they spend their whole lives serving our country. The Voice of Stray Dogs already has several such dogs that have retired with us. This year we will bring in – 100 retired dogs. They will have purpose-built facilities and medical services. We’re reaching out to people to help us do something for these soldiers.

They are not cute and cuddly and ready for adoption. Most are senior dogs, and they carry the weight of their jobs – most are arthritic, many have other illnesses as well. Some are younger but have been discharged from service due to medical reasons. From being working dogs, on duty every day, their lives suddenly change and they are confined to a kennel, away from their handlers. Neither can their handlers adopt them, as there is no pension or allowance to care for these #PatriotDogs.

At VOSD, we have approached – and in turn, been approached by – several organisations to provide a home for their retired dogs. In the past year alone, we have added dogs from the Kerala Police, the Karnataka Police, the Railway Police Force, the Indian Army. Just last month, a one-year-old Police dog was declared unfit to serve due to a congenital heart condition. He came home to us.

We believe it’s time to do something for our dogs, who have given us the best of their lives. This year, we want to add not just a few, but 100 dogs to the VOSD Sanctuary.

Dogs like Chakki and Christy, two ageing German Shepherds from the Kerala Police, spent their time lying in the sun, or playing “fetch” with our team. dogs like Arjun, a senior Labrador from the Karnataka Police – his handlers brought him from Hubli, and left him with a garland around his neck, and a tearful farewell.

We have a great deal of experience in dealing with old, unwell, abandoned dogs. The VOSD Sanctuary now homes 750+ dogs permanently, many of them old and on lifelong medication. We want to do something special for our Patriot Dogs.

– Build out a purpose built 10,000 sq. ft. enclosure only for our canine heroes

– Ensure daily lifelong care with joint medication, and renal, liver and cardiac support that is required for each of them

– Give them the dedicated love and care that only VOSD can provide, proof of which are our happy resident dogs at the VOSD Sanctuary

But we will not be able to do this without help. Even at our scale of operation, it costs us close to Rs 2000 a month to care for a senior dog, or one with special needs. We have started a Ketto fundraiser campaign will help us meet those costs, as well as the cost of building new infrastructure on our existing property. Every paisa counts, and at VOSD, everything goes to the dogs – there are no administrative costs or overheads.

VOSD (The Voice of Stray Dogs) is the world’s largest citywide dog rescue. In the past four years, VOSD has helped treat over 7,000 dogs, carried out over 200,000 medical treatments, and the VOSD Sanctuary is home to no less than 550 dogs.

So many desi dogs: Choice is yours!
A good helpline for stray dog problems
How to choose right boarding for your doggy?
Bengaluru and stray dogs: Smitten or bitten?

About Beena Arjunan 1 Article
The author has not yet added any personal or biographical info to her or his author profile.

Now, check the eco-friendly quotient of the parties you organise!

Our existence on this planet leaves a footprint, however small it may be. The trick is in minimising the waste and while maximising the joy quotient!

How to do a tree census: Ambalipura Lake volunteers’ experience

While government dillydallies, citizens show how to do it. A citizen initiative of data driven approach to sensitise people towards the environment.