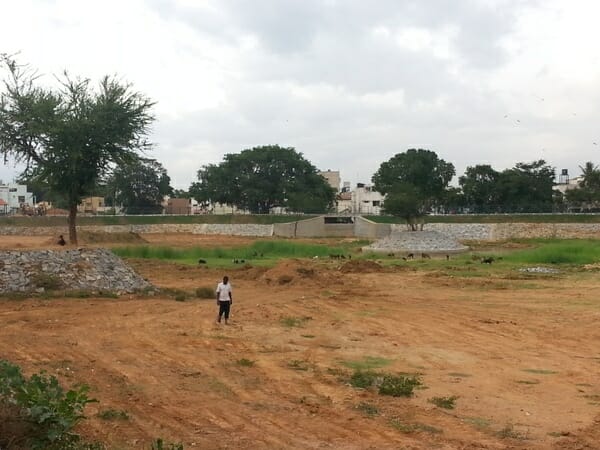 After decades of delays and legal complications, the finish line for Mestripalya Lake is in sight—but just out of reach. The lake, located in Koramangala 3rd Block in East Bengaluru, is ready to receive water, but until the project is transferred from the BDA to the BBMP, it cannot be filled.

The BDA has done all of the structural work visible today, including fencing the lake. Before development, the area was overgrown with weeds, and a receptacle for waste. Now, the lake has been dug out to receive water, and a wetland has been created on the south end of the lake. However, until it is filled with water, it will remain a large pit with a shallow marsh at its center. 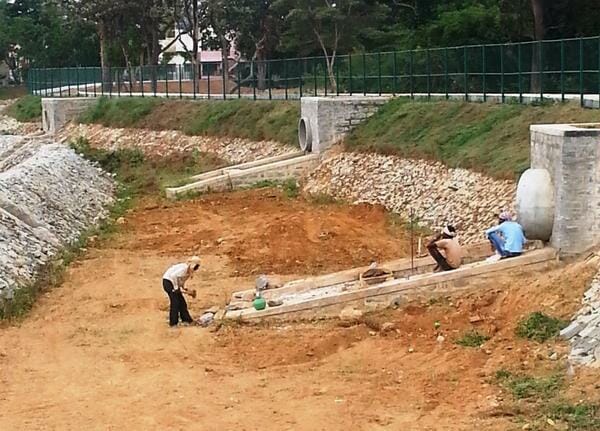 The inlets that are to bring in water from the stormwater drains into the lake. Pic: Holly Thorpe

The lake is intended to be filled using runoff water from the streets. This would be done by connecting stormwater drains at a higher elevation to the three inlets at the south of the lake. However, the drains to collect the water are not currently connected to the inlets, so no water is reaching the lake.

“It’s such a small, little thing. It doesn’t even come under lakes, it comes under the normal civil department,” said Vijay Menon, a Koramangala resident who is a part of the team that has been working to restore the lake for years. “The drains are connected to a different system, so we need to connect that system to the lake—that’s it.”

Dr. Radhakrishnan, another resident who has been working on the lake, expressed anxiety over the delay to connect the drains. He said that mosquitoes are currently breeding in the shallow marsh in the lake bed, and that he was concerned that by the time the drains were cleared, the inlets will be clogged again, extending the delay.

The connection of the drains falls under the jurisdiction of the BBMP, who should be assuming responsibility of the lake, now that the BDA has completed their work. However, the transfer has yet to take place.

Now that the work is shifting hands, an official transfer from BDA to BBMP must occur. An engineer at the BBMP said that the office has not yet received instruction to begin work on the lake, and that it still under the jurisdiction of the BDA.

Ajay Reddy, coordinator for the Mestripalya Lake Coordination Committee (MLCC), said the group will attempt to expedite the transfer process. “We are trying to push it and see that it happens faster,” he said. “We will be writing letters to the BDA and the BBMP as soon as possible.”

He said not only will this ensure the lake is filled more quickly, but that the lake is protected. In the gap in between the end of BDA’s work and the start of the BBMP’s, there is no one to monitor the lake.

However, BDA engineer Shivashankar said that the BBMP is not prepared to take the project due to insufficient funding. Until the BBMP gets required funding for the drains, there is little to do but wait.

“The BBMP once it takes over from the BDA has allotted Rs 8 crore for the lake and the adjacent property,” Reddy said.

The Rs 8 crore would not only cover the development of the lake, but also the connection of the drains. However, the money is currently out of reach. “The BBMP is saying that until that money comes in, they don’t have the money to connect the drains,” Menon said. “We don’t have a separate budget [for the drains].”

According to Menon, a report for the lake has been submitted to the BBMP, which will be converted into a Detailed Project Report (DPR). This DPR will then act as a budget, and the sanctioned money will be distributed accordingly. As of now, a DPR has not been produced, and it is unclear when the funds will be made available.

Residents working to rejuvenate the lake are split on whether or not taking the full sum is the right move. While the Rs 8 crore would be more than sufficient to finish the necessary work, Menon is among those who are hesitant to accept such a large amount. “The fear that some of us have is that if we just say ‘Yes,’ to Rs 8 crore, we will have no control over what is being spent and what is being syphoned out,” he said. He added: “We have created a plan for how we want the 8 crore to be spent, so hopefully that will minimise the extravagance.”

Ensnared in a legal battle

The Rs 8 crore also covers the cost of developing the plot adjacent to the lake. Menon said that they have already planned a number of improvements to the space, including parking, a playground, a space for vendors, an activity centre and an open air theatre. He said the goal was to create an “eco-friendly hub” to act as an extension of the lake. The plot is roughly 3.2 acres, at the south end of the lake. However, it is currently under litigation to determine the rightful owner.

“The government denotified the land and then they cancelled the denotification. The person who was denotified believes he wasn’t given a fair hearing and so the court said ‘You need to give this guy a proper hearing,’ ” said Radhakrishnan.

Radhakrishnan said that from what he understands, it is highly unlikely the BDA will lose the land. 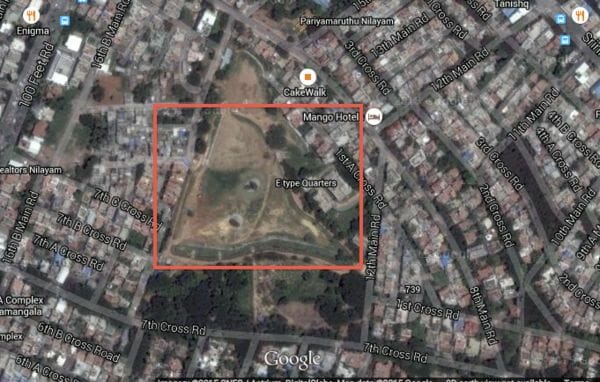 A view of Mestripalya lake from Google Maps

This isn’t the first time the lake or the property surrounding it have been taken to court. In 2010, the Supreme Court ruled that the BDA was the owner of the land, and that the land must be developed as a lake.

What followed was five years of missed deadlines and delayed development. In 2013, when the BDA began redevelopment of the lake, residents rejoiced with a Bhoomi Puja. A BDA engineer at the time said the work would be completed in nine months, or around May 2014—over one year prior to its actual date of completion.

The drains aren’t the only hurdle

The drains aren’t the only work that’s left on the lake, and perhaps not the only obstacle to filling the lake. According to Menon, the overflow drain at the north end of the lake may not be safe. He said a building has encroached on the drain, meaning that it could flood if the lake overflowed, affecting nearby homes. He said some have dismissed the issue, saying it is unlikely that the lake will overflow. “I would prefer to err on the safer side,” he said.

The BBMP is also expected to develop a park area with trees and a sitting area, and improve the existing walking path. Currently, the only completed portion is the walking path, which is about 900 metres in length and is yet to be paved with soil. 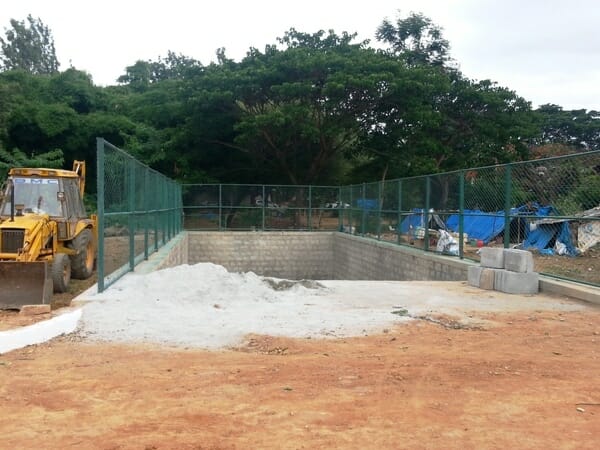 The kalyani at the lake. Pic: Holly Thorpe

Menon also noted that people from Mestripalya Village, to the north of the lake, will have different uses for the lake. Whereas many Koramangala residents may use the lake for recreational purposes, these residents may use it for more practical purposes, such as washing cattle. He said that in developing the lake, they are working to create spaces for village residents. “It’s not an attempt to segregate. They want their own spaces,” he said. Already, a separate pool, or kalyani, has been installed for cattle. “It’s a very social issue,” he said. “We have tried to develop facilities for the village.”

As of July 14th, BDA engineer Shivashankar said that he had received no official notice of an inauguration of the lake.

If more than 50 trees are to be axed for any project, authorities have to consult the public first, as per law. But how do authorities manage to avoid public consultations even when they axe hundreds of trees for mega projects?

Have you visited Mandur of late? If not, read this!

Will stopping the dumping of garbage in Mandur solve the problems of the villagers? What are the problems they are experiencing? Citizen Matters does a reality check.

Initially there was criticism on the quality of BDA housing which seems to have died down. BDA allows the mutual exchange of same kind of flats between individuals who need it.