HSR Sector 2 Residents Welfare Association (Regd) had organised a special meeting on October 18th at the Cambridge School premises with the Joint Commissioner, BBMP, Bommanhalli Zone and his engineers to discuss the various infrastructural issues affecting the residents of the area.  The Corporator of the ward, Lata Narasimhamurthy was also present at the meeting. It was for the first time in six to seven years that a Joint Commissioner along with his engineers, in the presence of the Corporator, was interacting with the members/residents within the sector premises.

In his opening remarks, the President of the RWA, Brigadier R S Murthy stated that the Association had been contributing to the community in the neighbourhood for over eleven years, taking up issues on a regular basis with civic agencies and elected representatives. He proudly mentioned that the Association was recognised as one of the best RWAs in Bangalore by the National Confederation of Residents Welfare Associations, last year. He thanked  the Corporator and BBMP officials for all that they have done in the sector and added that a lot more needed to be done, and that everyone would work on these issues jointly, towards provision of better quality of life.

The infrastructure issues, which affected the community, were discussed in a frank and forthright manner.  The BBMP officials had been given the points to be discussed two weeks before the meeting, so that they could come prepared

Concluding the meeting, the President mentioned that it would require vigorous, focussed follow-up and supervisory actions by the staff of BBMP to complete the tasks with commitment and a sense of responsibility. He requested the Joint Commissioner and Corporator to take cognisance of the residents’ concerns and said that residents deserved a better quality of life in this environment

A memorandum listing out the points discussed was formally handed over to the Joint Commissioner BBMP and the Corporator, and a response in writing was requested within the next 3-4 weeks. Photographic proof of environmental degradation was also handed over to them. 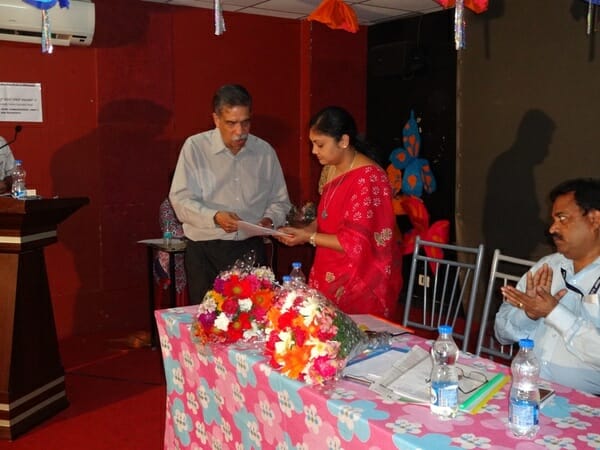 Brigadier Murthy announced that a joint awareness campaign on environmental issues, together with Cambridge Public School, NIFT and residents would be organised in the sector on November 8th and sought help from the Joint Commissioner BBMP and the Corporator.This initiative was appreciated by the Joint Commissioner and Corporator and they promised complete and total support towards this SWATCH HSR campaign.

Excerpts from the memorandum submitted are listed below.

We are doing our very best to regularly  bring in an awareness to our members /residents in segregating wet and dry waste and will continue our efforts. However, actions on the following connected issues must be managed by BBMP in a proactive, coordinated and sustained manner towards a permanent solution.

Most importantly, BBMP Engineers and supervisory staff must evolve a fool-proof system in monitoring contractors and pourkarmikas, ensure that segregated waste is not mixed again and that garbage is lifted on a regular basis from the many garbage dumps in the sector.

We request you to issue directions to your staff to take action on immediate vacation /clearance of encroachments / unauthorised vendors/ labour camps / hawkers / auto repair shops along main roads, particularly on 24th main road. The open area opposite the masjid on 25th Main Road is yet another eye-sore.

This road is one of the filthiest in HSR Layout. Indiscriminate dumping of debris, discarded building material, garbage and labour camps dot right through the 18th cross road, causing inconvenience and serious health hazard to residents in the neighbourhood. Both sides of the road are also being used as toilet and urinals .To add tothis, most of the street lights are not functional and consequently a lot of illegal activities appear to be going on.

A large number of vacant plots and vacant sites under the civic agencies have not been maintained for many years. Some of these plots/sites are virtual jungles with thick undergrowth and are being utilised as garbage dumps by some irresponsible contractors, misused by floating population and in some cases mutilation of the environment by educated citizens lacking civic sense. Some of them are also being used by construction labourers and some others as toilets and are a haven for pigs. Neighbours of some of these vacant plots/sites have been genuinely trying to establish contact with the owners and try to maintain a clean neighbourhood by spending money regularly. There was a move several years back, where BBMP would evolve a procedure to maintain these vacant plots and recover the cost from the owners at the time of property tax collection.This should be seriously considered.

5. Restoration of playground on site no: 64 (adjacent to HSR Layout Sector 2 water tank), 17th cross to its original status

On Decemeber 20th 2013, the High Court gave its verdict on a PIL (writ petition) filed nearly 5 years back on the playground issue. There is hope among residents that work will be undertaken towards restoring the playground and lung space on a fast track mode.

6. Maintenance of parks other than adopted parks

For several years now, the Association has been bringing the state of ill-maintained parks to the notice of the authorities. We are somehow managing these lung spaces with help from our residents and at times, purely on a personal basis with staff at BBMP. Till date, no permanent action has been taken on this issue. In the interest of the good environment in the layout, we request the BBMP to take action to maintain the parks regularly, by streamlining their maintenance procedures, management of caretakers and change of the equipment for children to play.

Roads do not last long since they are at most places laid with substandard quality and first aid repairs are carried out by traffic police /residents at times after heavy rains. There is lack of coordination between various civic agencies in this area of work and the quality control Department appears to be doing their job. We request completion of bitumen surfacing of roads and work on footpath (pedestrian walkway) in HSR Layout Sector-2, be taken up on priority to ISO specifications.We also request your engineers to ensure that roads in this ward are pothole free.

For the last few tears very little /no action has been taken by BBMP to de-silt the drains on all roads. Almost all the drains are choked affecting the natural flow of rain water causing inconvenience to residents and commuters.

The CA site on plot no: 17, on 25A cross was allotted to Siddhartha Educational and Cultural development Trust by BDA .This premises which was shown as running a coaching centre initially is now being used for commercial gains by the trust who has been running a kalyana mantapa and convention centre for some time now. We seek your help to stop this commercial and illegal activity in this building.

We wish to bring it once again to the notice of BBMP that commercialisation of residential areas is on the increase. We also notice violation of building norms by a number of owners/builders.

In spite of High Court’s direction to BBMP, the entire layout is dotted with illegal posters, banners and huge cut-outs. Strict action and monitoring must be initiated by BBMP and defaulters must be heavily fined.

We request you to give directions to concerned staff to ensure that the issue of street lights is addressed and resolved on priority.

Coordinated effort by BBMP and Police on evolving a proper parking system in 24th and 27th main road is urgently needed in public interest.

15. The issue of optic fibre cables

Intercity buses are occupying prime space on 19th main. They are an inconvenience to pedestrians. BBMP should recover costs from them and evict them.

About Brig (retd.) R S Murthy 11 Articles
The author has not yet added any personal or biographical info to her or his author profile.

How four Vasanth Nagar residents are saving plants during lockdown

Plants in public places are becoming water-starved during the lockdown. In Vasanth Nagar, four residents have been going out and watering such plants to ensure they stay alive.

Over 40 percent of road accident victims in Bengaluru are pedestrians. To change this, we need a long-term action plan instead of ad hoc measures

On Infrastructure, urban governance and the narratives in the media

Bengaluru needs some things in place if we want infrastructure projects to succeed – from better project specifications to choosing contractors.