One of the first things which greets the traveller while passing through Museum Road in Bengaluru is the dug up pavements. The digging has now been extended to the mouth of Church Street, where it meets St. Marks Road. The delay in finishing the work has been apparently on account of delay in payments to the contractors by BBMP.

The above situation makes me wonder if there can be a market-based solution to avoid such delays. The stretches of roads where the pavement stretches are being widened represent the central part of the city which witnesses record number of footfalls—tourists, students, working professionals, occasional pub hoppers and people of other ilk.

The challenge with the current contracting model is that contractors are largely reliant on frequent payments from BBMP. When that does not come through, there are work stoppages that lead to cost and time overruns. Can we think of a market-based model, along the lines of an NHAI concessionaire model, where the work for the entire pavement network is contracted out to a private party? This would be a revenue-driven and which could be a win-win situation for all parties concerned. 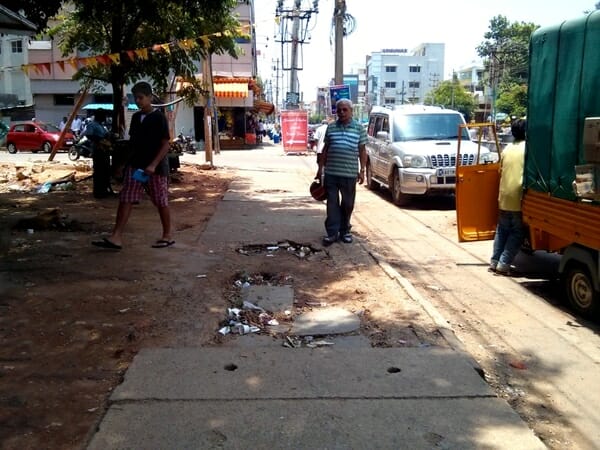 Uneven and pothole-ridden footpaths make the walk an ordeal for senior citizens. They are sometimes forced to get on and off the footpaths and this can prove tiresome. Pic: Rahul Ravi

For starters, any pavement design would have to be an extensive network, and would need to connect critical tourist areas in the CBD area (Commercial Street, St Marks Road, M G Road, Cubbon Road, Vittal Mallya Road and other important stretches) to form a part of a larger pedestrian infrastructure. A safe and accessible pavement network would not only make existing pedestrians feel safe, but also attract new potential pedestrians. This would also provide a good business case for a market-led model where private companies might be interested in creating and maintaining good pavements.

Such a financial model would in all probability be an SPV in which the footpath works for the identified stretch is bundled into one contract, and companies that have expertise could bid for such a contract. Keeping in mind the 74th amendment, the BBMP would in all probability be the authority which would float such a tender, in consultation with other civic bodies which also have a stake in city roads—PWD, BWSSB, BESCOM etc.

The company that wins the contract would be responsible for the construction and maintenance of the pavement network for an agreed period (5-10 years). The company would provide the investment with the possibility of some Viability Gap Funding (VGF) from the municipality/ state government. In return, the company would have the right to auction vendor spaces along the stretches of this pavement network and earn revenue and explore other revenue sources that would be allowed by the municipality. The state government/BBMP might also want to look into creating more incentives for the contractor if the need arises. There could also be the possibility of a revenue sharing model by the company/contractor to the BBMP as an incentive to the ULB .

This financing route might be considered a win-win-win situation because there is creation and maintenance of a world class pavement network at zero cost to the state government/BBMP; it would ensure that there is seamless connectivity for pedestrians in what is probably the most attractive stretch for tourists in Bangalore. Once pedestrians start feeling safe, it has a multiplier effect and attracts more pedestrians (potentially additional tourists—domestic and international). Increased number of footfalls with shopping opportunities at the edge of the footpaths has a good effect on commerce (increased revenue for vendors & the ULB).

Since vendor space is auctioned, the vendors have a direct incentive to ensure that unauthorised elements do not occupy prime real estate. They also have a direct incentive to ensure that motorised bikes do not enter footpaths since that would mean loss of business for them (that can be done physically as well by installing bollards). Vendors with increased business opportunities would ensure that the contractor/company gets regular and sustained returns for the concession period. Finally, and most importantly, the investment for such a venture comes not from the municipality, but from the contractor/company that wins the bid. Thus, this money saved can be invested in better opportunities.

Specific contract, citizen participation should be in place

However, there are some issues that need attention. First is the issue of checks and balances, i.e. how to ensure that the footpath stretch is constructed and maintained as per the agreed standards. The current model of checks and balances does not seem to work, and that will need to be sorted out in the contract itself.

The other point that any contract would need to address is that of aesthetics, especially because this network has a rich history to it and if that history needs to be preserved, the contractual agreement will have to specifically spell out the nature of commercial activities, advertisement types and other such aspects related to aesthetics.

The contract also would need to be very specific in terms of what the grievance redressal mechanism would be and who would be included in the arbitration process if the need arises.

Finally, the costs of doing business should not be too much. Else it would drive away the tourists and would result in a flawed business plan. Recall the example of Mumbai’s Juhu beach, where vendor spaces were auctioned, resulting in high prices of fast-food which kept customers away and eateries had to shut down.

However what goes without saying is that for such a plan to work, one would need wide pavements which have recently come along St. Marks road and which unfortunately, the Chief Minister has decided to curb. Unless that happens, all the things mentioned above will not fall into place.

The other issue which such a business model would have to address is that of the 74th amendment (and that should be the way forward). The government would have to come up with innovative ways to engage with urban local bodies, communities in the vicinity, and experts in this domain among a host of other stakeholders to make such a plan work.

NBF asks BBMP to desilt drains, repair footpaths and expedite TenderSURE
Here are the serious issues about TenderSURE you should be worried about!
What’s this Tender SURE all about?

Among the top issues that worry Bangaloreans are water, transport and garbage collection. Will voter views and concerns matter in the not-far-off assembly elections for Karnataka?

How house hunting made us ‘hookers’!

Most government offices are male -dominated. What is it that holds women back, that doesn’t let them follow their dreams?