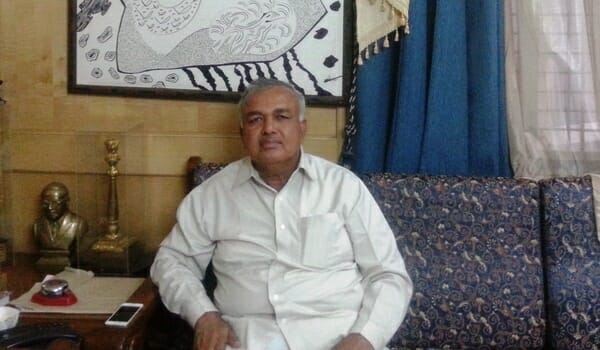 Ramalinga Reddy, MLA of BTM Layout, is a busy man. In addition to holding the Transport portfolio in the State Government, he is also the Bangalore In-charge Minister. Citizen Matters caught up with the six-time MLA over tea at his home office in Lakkasandra, even as the rains lashed the city. Read on to know what he has to say about the BBMP bifurcation, the waste management crisis and where he sees the city four years from now.

What development works have been initiated in your constituency? Is there anything different that has been done?

There is nothing different. Two-thirds of the BTM constituency is new to me – Ejipura, part of Madiwala, Adugodi, Koramangala, Jakkasandra. For almost 20-30 years, besides the main roads, it was left without tarring (sic). Parks were there, but they were not being maintained properly. In areas like Madiwala, Lakkasandra, water supply was in a bad shape. For the past six months now, we are having problems…

What do you mean when you say you have been having problems?

I don’t mean for the entire area – a few houses on some roads. For example, in Adugodi, the folks in Devegowda Layout have been complaining. In Shastrinagar, though people have borewell water, it is not suitable for drinking. They prefer to drink Cauvery water.

Apart from them, I’ve kept aside Rs 8 crores for development. Lake, ponds, fencing all of that comes under BDA. We are also planning a park behind St Johns – this was a disputed property earlier. The plan for this is included in Nagarothana scheme as well, but Cabinet has to approve.

We are planning to take up development of Madiwala Lake and Agara Lake this year. For the past five years, I was in opposition. So I was not given funds.

You had mentioned that the BJP was partial in giving funds in an earlier interview with us. With you as In-charge Minister and the Congress in power, has it become easier?

Definitely. I will be distributing the Nagarothana funds, under the Chief Minister’s discretion. However, I will not discriminate. We survey before we sanction funds; we do not go only according to what MLAs or corporators have to say. Our engineers will survey and identify which the bad roads are. Whether it is a BJP or Congress or JD(S) MLA, it will not make a difference.

What is your take on the BBMP bifurcation that the BS Patil Committee is looking into?

See in 2006, Bangalore was only 240 or 250 sq km. At that time only Congress MLAs were opposed to including rural areas. Our government was not there, and they took a decision. We are now suffering because of the wrong decision that was taken then. And now if you look at it, the administration is in favour of the division.

Are you in favour of the bifurcation?

Definitely. In the interest of Bangalore, I am in favour of it. See what has happened to several areas now, even eight years later – they have no water, there are no proper sanitary facilities, they do not have anything.

Bangalore is currently facing severe problems – whether it is traffic or garbage. The Chief Minister has said by December, dumping will stop in Mandur. Is that a possibility? How is it being done?

See, they started processing waste in Mandur, but because of some reason – litigation or something, I don’t know exactly – the problem arose, causing nuisance not just for people in that area, but for the government as well. Now we have started seven processing units – in another two or three months, they will be completed and processing will begin. They can segregate 500 or more tonnes of waste. There are also some private plants like Maltose which are handling hotel waste. Another plant coming up near Ramnagar has not been started because of technical reasons. But as I mentioned, the corporation itself is going to start seven plants – we do not want to depend on others. The problem will be solved – maybe a month or two late.

What are the alternatives?

That I cannot tell.

You were a witness to the mess that ensued when we had 13 cm of rain in September. Why are there no active measures to prevent flooding in the city?

In Old Bangalore, every village used to have a lake. Now a lot of these lakes have dried up or have been closed. Our bus stand, Kanteerava Stadium, Jayanagar Stadium – all of these were lakes. On several old lake areas, BDA has formed even layouts – Dollars layout, Domlur. Because of our old administrators’ fault, we are suffering now.

Revenue people will take this up. No severe damages were there – no houses collapsed. In Anepalya and Ejipura, there was flooding in a few houses. They lost food grains and provisions. And this was because of bad planning on our part.

You have been heard asking citizens why they bought properties in area that have water issues. Would you recommend stopping development of those areas where water supply is not available?

We have 27 TMC of water in Cauvery. Of this, 10 TMC we have approved for Bangalore about five-six months ago. We have 10 more TMC that will be sanctioned. That will be sufficient for CMCs, but I don’t think it will be enough for all the 110 villages – for the entire 800 sq km.

See in Bangalore, you have lots of 30×40 site. Every family owns a car – if it is a big family, they will have even two to three cars. We can’t prevent folks from using their cars. But I think in Hongkong or Bangkok, they have to take permit to buy a car. We may have to do something like that. In the future, there is a great possibility that we may even have to limit the sale of cars.

What can be done with respect to illegal encroachments?

Court directions are there. The encroachments will be cleared, but it is likely to take some time.

Why is it that there are several cases when the authorities do not solve any problems till the High Court steps in?

We don’t need court directions to fix all problems. If all the authorities, engineers, everyone who is involved acts correctly, these will be solved normally. If no one is making a mistake, there is no need for courts or the police or laws. But man is like that. When a court directive comes, it is an impetus for the authorities to act; they can’t help but do it.

Can you share details of the MLA-LAD funds you received?

Each MLA gets 2 crores from the government. This you can get if you file an RTI. I can share details of the what was spent from the 300 crores that the CM had sanctioned for improvement of roads in the 28 constituencies. I can also share Nagarothana details once we have cabinet approval on it.

(Citizen Matters is currently awaiting these details. They will be updated here once we receive them.)

How can transparency and accountability be improved in the government?

One way to do it is for citizens to file RTI when they want information – that itself is a means to get transparency.

Take for instance the garbage issue. Around 500 – 600 crores has been spent on the issue, but I know that about Rs 200 crores has gone to waste. I have sent the Chief Minister a letter asking for a Technical Vigilance Cell under the Commissioner (TVCC) enquiry to be conducted – this was sent in June 2014.

Many times, we get bills, but the garbage hasn’t gone anywhere. This could be the same in the case of other matters as well. Contractors need to change the mentality – they need to do quality work. Right now a lot of them do not give any importance to quality work. The same applies to engineers as well. They will do the work in a hurry, take some percentage of it, and go.

Look at our houses – we plan it out well so that it lasts for 30 – 40 years. In Europe, there are houses that have been there for 600 -700 years. We need to assign work to engineers who are committed to that kind of quality.

People should do the work responsibly. This is applicable at all levels. Else, irrespective of the amount of money we spend, the end result won’t be good.

What about the TenderSURE project? Will it be extended to all of Bangalore?

A lot of the Bangalore roads are narrow. So in these areas it could be difficult to implement the TenderSURE roads. Around here, it should be possible in the Koramangala and BTM Layout areas.

We are creating a cycling track around the Madivala tank – about 5 crores is being spent on this.

How can the state of law and order be improved in the city?

Right now there are no major problems in the city. There was the incident in Vibgyor, but it happened on the school premises, it would not have been possible for the police to monitor that. We don’t have too many communal clashes. Rowdyism has also reduced. Many of the cases that are filed now are with known people filing cases against each other.

What can we expect for Bangalore in the next four years? What is that one commitment you can give to your constituents – which you will do in the next one year.

First preference is for segregation of garbage – we have to do it. The Prime Minister has also called for Swachh Bharat. If every citizen cooperates, it will be good. According to me, we have to ban plastic. If we so do, our garbage can reduce by half. It is ugly and is not biodegradable. Other than plastic, everything else is biodegradable. Plastic has been banned in several hill stations – Ooty and Coorg for instance – this needs to be done across the country – it has to become a policy. Right now, after a single visit to the mall, we come back home with around ten plastic packets. We bring it home and throw it. Around 20 – 30 years back, people would step out of the house with a bag or basket in hand; not anymore.

We also need to look into the matter of traffic. Right now there are two flyovers coming up. These will come up in around two years. We also have six signal-free corridors coming up in the city. Then there are the TenderSURE roads that are coming up.

With that, we had to wrap up our interview as the minister had another appointment. While he did deflect some of the questions we asked, we hope that we are able to get him to elaborate further when we meet him next.

“Ask the public, they can tell you about the changes I have brought about.”
BTM Layout MLA Ramalinga Reddy

And the action begins!

They waited all night on the Church Street to see who dumps garbage, but did not see any. Finally they saw who did it – who was it?

Segregation at source gets new followers in Sadashivanagar

Our intrepid 16-year-old re-joins his garbage collector friend on his rounds again, and finds some change!

‘Most policemen are not trained in traffic management’

With a PhD in traffic management Additional Commissioner Police (Traffic) M Abdulla Saleem, is confident of working around the infrastructure work to fix traffic issues. But traffic planning is still not under his purview he says.