A doctor by qualification, C N Ashwath Narayan has been a long-time Malleshwaram resident. He contested the assembly polls from Malleshwaram thrice, and has won twice, his entry as a winner being in 2008.

He, directly or indirectly, was a part of many businesses and charitable trusts, including Padmashree Medicare Private Limited, TKN Global Education Services, Padmashree Charitable Trust, Padmashree Diagnostics and Malleshwaram Sports Foundation, but not anymore.

He has been in the news in recent times for the multiple manifesto outreach programs he has been organising. His administrative initiatives have been largely in the medical sector with Health and Care for insurance and social care for seniors.

Ashwath Narayan in the assembly

He is a member of the Joint Select Committee on The Karnataka Private Medical Establishments (Amendment) Bill, 2017  Ashwath Narayan is also member of Committee on Government Assurances which tracks the assurances given to the Legislative by the Executive/ Bureaucracy.

March 22, 2016: Ashwath Narayan spoke in the assembly against Venkatappa Art Gallery being handed over to a private trust, and requested the assembly to discuss the issue.

March 23, 2017: During the discussion of a bill, Ashwath Narayan requested that the registration of doctors in Karnataka Medical Council be made Aadhaar-enabled, to avoid  fake doctors getting registered.

June 19, 2017: He spoke about the budget spends in health sector, healthcare in government hospitals, fund utilisation under National Health Mission, inaction of the government in marks card tampering and examination malpractice in medical education institutes.

June 20, 2017: Ashwath Narayan participated in the discussion on KPME act, and objected to leasing out the construction work of a hospital in Udupi to a private organisation. The minister clarified that the hospital will continue to be a government hospital.

(This data has been taken from the uncorrected version of the debates uploaded in kla.kar.nic.in, but do not include expunged words or subjects. The data was compiled using a simple word search for the MLA’s name in different combinations, and may not include all the instances.)

August 20, 2013: At the inauguration of BBMP’s dry waste collection centre in Malleswaram, Narayan said the cooperation of people is needed to make the initiative a success in its first phase covering 22 wards.

April 25, 2014: The MLA participated in the inauguration of a leaf composting unit inside a park located on Malleswaram 8th main road, and mingled with residents who explained him about the composting process.

July 11, 2014: Ashwath Narayan opposed the bifurcation of the BBMP in meeting held by the Mayor.

October 29, 2014: According to a survey of legislators performance conducted by DAKSH, the MLA figured in fifth place in the ranking system.

February 4, 2015:  In an interview with Oneindia.com,  the MLA spoke about the developments in his constituency: the launch of the Malleswaram Sahay app connecting authorities with people and the Rupees 80 lakh sanctioned for the installation of CCTV cameras to prevent crime.

March 30, 2015: After the demolition of the Malleswaram market, sellers expressed their anguish and wrote to MLA Ashwath Narayan who promised to help them out.

December 27, 2016: 160 CCTV camera were installed in seven wards of Malleshwaram, to help the police nab culprits responsible for the illegal dumping of garbage. The MLA supposedly gave Rs 40 lakhs from the MLA fund towards installing them.

November 12, 2016: Ashwath Narayan participated in an initiative hosted by TOI to bridge the communication gap between the authorities and citizens of the locality. This was an opportunity for the citizens to air their grievances.

September 24, 2017:  He was among the protesting MLAs in front of the Mahalakshmi layout police station, asking for a withdrawal of the notice served to BS Yeddyurappa, who was being accused of kidnapping ABVP leader Vinay Bidra.

November 1, 2017: He opposed the introduction of automatic sweeping machines mounted in vehicles and said that money on procuring them was spent without the approval of the legislative council.

November 1, 2017: Ashwath Narayan, member of the joint select committee, Private Hospitals and Nursing Homes Association, said that the committee had spoken to the government about clubbing private and government hospitals to make laws more transparent and easy to amend. This was during the protests against KPME Bill.

November 29, 2017: The MLA said the indoor basketball stadium in construction for the past 11 years will be completed soon, with speeded up process.

January 17, 2018: In an interview to OneIndia, Ashwath Narayan spoke about his IT initiatives and election preparations.

January 30, 2018: He wrote to the Election Commission asking them to introduce changes in the electoral process, especially by making the system of updating the electoral rolls ongoing and ensuring voters IDs are delivered by post.

February 12, 2018: He was interviewed by thestate.news website, and spoke about the election, constituency and other issues.

How did Ashwath Narayan spend his Local Area Development fund?

Every year, an MLA is given Rs 2 crores to spend on developmental works in his constituency. He should allocate the funds for areas such as government, community, education and health infrastructure

In five years, according to the available data, Ashwath Narayan has spent Rs 4.282 crores out of the Rs 10 crore funds that he is entitled to as an MLA. His maximum expenditure seems to have been on sports infrastructure for education-related institutions. He spent 98.24 lakhs on constructing indoor volleyball stadium near Chandrashekhar Azad ground. Other education-related infrastructure, including sports equipment, toilets, gymnasia, yoga, housing and hostel complexes and workshops received allocations at different ranges.

Rainwater harvesting, installation of electrical lights and other developmental works on the sixth floor of a government school received a grant of Rs 10 lakh from him.

The MLA did not make use of the funds to the fullest extent. He said in an interview to Citizen Matters that he wanted the restrictions on MLA LAD fund usage gone. Some attention seems to have been given to road development, toilets and health infrastructure as they are school-related, but there is no money allotted for building bus shelters, parks or other forms of community infrastructure additions.

Check his spending in this list of data available here. 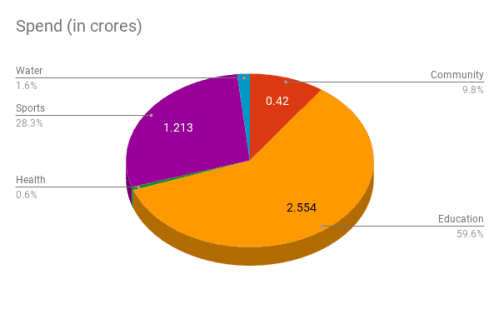 In a city that prides itself on information technology, the Election Commission’s buggy voter registration tool online is frustrating citizens to no end.

BBMP website updated with list of property owners who have paid the property tax for 2008-09, but this list contains errors and the site itself is cumbersome to use.