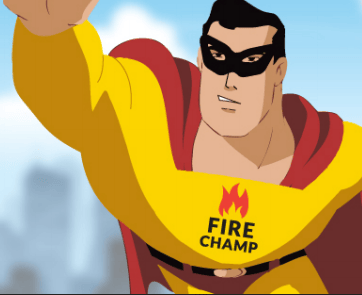 Beyond Carlton has launched India’s first mobile app on fire safety. The app encourages citizen participation in identifying fire safety violations and reporting the same for effective action by the Fire Department.

The app aims to:

Fire Champ, the mobile application, launched by Beyond Carlton along with technical support from IChangeMyCity.com and involvement of Karnataka Fire and Emergency Services enables you to report any fire-­related measures not adhered to in a building around you. The building could be your apartment, your office complex, your kid’s school building etc.

There have been many fire-­accidents in the past such as the Carlton Towers in Bangalore (in 2010), Krishna English Medium School at Kumbakonam (in 2004) and Uphaar Theatre in Delhi (in 1997) that have resulted high number of deaths. Many people could not escape the fire because of factors such as fire exit being blocked, fire extinguisher not working, etc., that could have been easily avoided.

Fire Champ, enables you to click a picture using the app, enter the description of the complaint and your complaint is posted! The complaint that you post will be shared by Beyond Carlton with the Fire Department who will take preventive actions and ensure that fire safety norms are followed.

The app is currently available on the Apple store and the Google Play store.

• The Google Play store for your Android phone: https://play.google.com/store/apps/details?id=com.janaagraha.firechamp

Beyond Carlton’s primary objective is to create a safer environment by addressing issues around fire safety, including policy and legislative changes, as well as to ensure accountability. Family members of those who passed away and injured in the fire are the founding members of the Trust.

Beyond Carlton participates in internal corporate workshops on fire safety and is working with industry bodies to address issues around fire safety. It was instrumental in filing a PIL in the Karnataka High Court in 2011 and managed to get strict new laws implemented for violations in high rises in Karnataka.

Beyond Carlton has been recognized for its various efforts and its Managing Trustee, Uday Vijayan received the prestigious Namma Bengaluru Award in 2012.

The content for this article has been taken from a press note sent by Beyond Carlton group.

It’s a worrisome week for Bangaloreans. On the heels on a major gas cylinder blast that swallowed lives, another outbreak happened, this time in Koramangala.

Bengaluru has been declared as a COVID-19 hotspot, and it’s dealing with several issues – food supply to migrant labourers, vehicles on the road despite lockdown, and even abandoned animals in pet shops. Read more in our weekly roundup.

When the Physical Education students who are going to be instructors in future don’t have good facilities to train themselves, can we expect quality in sports?