As a part of decongesting traffic from Silk Board junction to Madiwala checkpost, the traffic police have converted some two-way roads into one-ways. Now the vehicles going from Silkboard to Koramangala or Diary Circle can move easily on both sides of the road. One may thank the police for this initiative, and for facilitating smooth traffic flow on these roads. 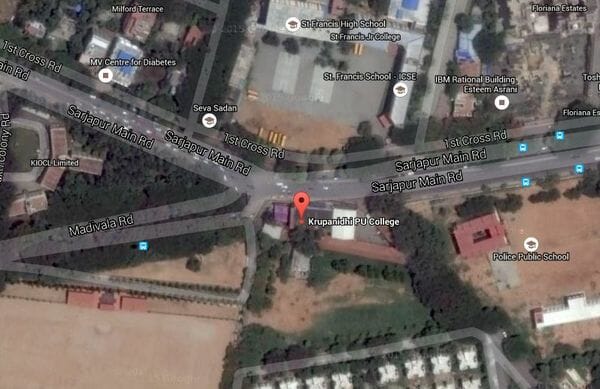 But the main problem is for commuters who are moving towards Silk Board or Hosur road, from Dairy Circle or Koramangala water tank. They have to go towards Krupanidhi College junction and then take a right onto the Madiwala market road. The road here, on both sides of the divider, is full of potholes. The vehicles going from Sarjapur road to Dairy Circle too, have to take same route, then take a right at the Total Mall junction.

Everyone knows Bangalore’s roads and that potholes are killing or affecting citizens almost every day… Still, one may ask why Madiwala road is called out here.

Both sides of the road from Krupanidhi to Total Mall is used by heavy vehicles like BMTC buses and lorries. The road also has some very deep potholes. For two-wheeler riders, it can be very dangerous; even if one tyre of the vehicle was to fall into a pit (pothole), the rider could lose his balance and be mowed down by one the heavy vehicles coming from behind. If that does not happen,  the rider will have to stop the vehicle and get down, to physically remove/life the vehicle from the pothole.

During night hours, especially between 7 and 8 pm, BMTC buses, cabs and lorries are rushing towards Total Mall junction, as there is no signal after Krupanidhi College junction, en route to Bommanhalli junction. Due to this rush, heavy vehicles could either deliberately forget the safety of two wheeler-riders, or honk unnecessarily when two-wheelers manoeuvre their way slowly across the potholes on the road.

These potholes have not occurred in one or two days; they appeared on the roads more than one or two months back. I wonder when BBMP or the traffic police will look into this matter. Are they waiting for a major accident to occur, where a commuter could lose his life? I don’t know about the ministers and officials as they may be busy wondering if the date for BBMP-elections should be announced or if it should be postponed.

I have only one thing to say to the commuters using this road. Whether or not safety measures are taken, your safety is in your hand.

It is often said, “Speed thrills, but kills”. But here, we should say “Potholes and bad roads can kill.” For your own safety, use caution when driving!

Sarjapur Road-Madivala one-way: A tragedy for residents
Koramangala 3rd Block a death trap after Sarjapur Road was made one-way
Bengaluru traffic police’s traffic plan in Madiwala: Will it work?

About Rakesh HP 7 Articles
The author has not yet added any personal or biographical info to her or his author profile.

While the actual amount required to construct the Peripheral Ring Road is around 650 crores, the Bangalore Development Authority is planning a mega project of 4500 crores, where land and money get wasted.

For Uday Garudachar, the controversial Bengaluru builder and owner of Garuda Mall, an important project is underway, mired in controversy.