Here’s one of the reasons why Bengaluru’s administrator BBMP has a severe fund-crunch. Every year BBMP budget expects crores of rupees to be collected as advertising revenue. But, the actual amount collected by the BMBP is way below expectations.

Budget estimates for 2012-13 predicted that the advertising department could bring in Rs. 45 crore, but the actual revenue collected from registered hoardings was only Rs.22 crore – thereby causing a deficit of 23 crores.

BBMP advertising department manager Lakshmi M has the reason: “Many advertisers who fail to pay their taxes or renew their license are considered as illegal advertisers. When we try to take action against them, they get a stay from the court. (So) their hoardings are left untouched.”

She informs that around 70 to 75 cases are pending in court, which cover various advertisers. Such hoardings are used by the advertisers, but the fee is not paid to BBMP. Thus the deficit arises. 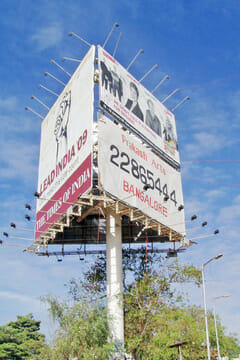 This is just one side of the coin. Advertising Department has other problems to face, too.

As it is, hoardings, if managed by BBMP directly, will be a great source of income. Now BBMP is letting private agencies erect hoardings and collects a fee from them, leaving the task of marketing to them. A BBMP document shows that a backlit hoarding measuring 30′ X 15′ erected in a prime location like M G Road, earns BBMP a meagre Rs 59,630 for 13 months.

However, a call to the Star Advertising Agency by Citizen Matters asking the price an advertiser needs to pay for the same hoardng received a reply that it is around Rs 1.75 to Rs 2 lakh per month. This means the amount paid to the BBMP is 1/35th of the actual revenue earned by the advertising agency.

The BBMP is also duped by illegal hoardings that are erected and operated with no permission from BBMP. The issue of low advertising hoarding revenues was raised by Mahalakshmipuram Councillor S Harish in a recent council meeting. He gave the example of a kilometre stretch of K R Puram road that had 20 illegal hoardings. He accused the Advertising Department of not keeping a check on such illegal hoardings. 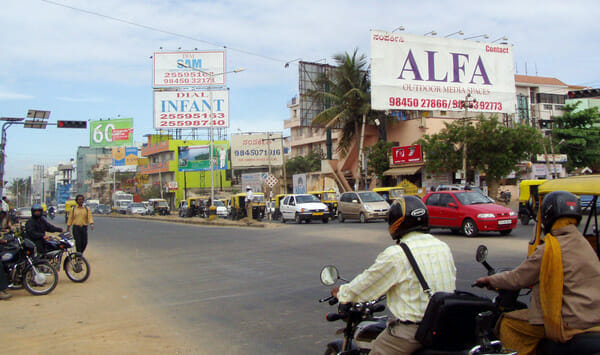 At the council meeting on August 28, 2013, BBMP Commissioner Lakshminarayan promised to set up a barcoding system to keep a check on the unauthorised hoardings and also promised to form a special team of officers to identify illegal advertisements and hoardings and submit its report within 30 days. 525 illegal hoardings were removed in this drive.

However, in another BBMP council meeting held on October 29, 2013, Corporators argued that there are more than 1,000 illegal hoardings still operating across the city.

On October 9, 2013, the High Court ordered BBMP to take immidiate action against illegal flexes, banners and hoardings. The court ordered to form a team of officers who shall inspect the eight zones twice a week in the night. On spotting any illegal hoardings, flexes or banners the officers should file a complaint on the concerned who erected it, in the local police station.

Following this, BBMP Commissioner formed an inspection team of Revenue Officers and drafted a notification. This notification is still not circulated to other zonal offices. Officials blame holidays for the delay.

Such actions are taken every year by each commissioner. Even last year, the then commissioner Rajneesh Goel and Siddhaiah had promised to form a team to remove illegal hoarding. In a well publicised drive, Rajneesh Goel removed some illegal hoardings from MG road and later announced plans for a barcoding system, to track authorised and unauthorised hoardings. Citizen Matters was unable to get details on this.

Lakshmi says citizens can help BBMP in identifying illegal hoardings. They can give a written complaint in writing or via mail (bbmp.advertising@gmail.com) or verbally on telephone. Complaint must be directed to the BBMP Commissioner, Assistant Commissioner or the respective Zonal Joint Commissioner. On receiving the complaint, the Department will inspect the hoarding; If found to be un-registered, it will be removed.

Here’s a small checklist you can use to spot illegal hoardings.

However, Lakshmi says the department does not penalise the violators. Citizen Matters pointed that Section 2 (3)(A)(7) of the Advertising Bye-law clearly mentions that any unauthorised advertisement shall attract penalty. However Lakshmi seemed unaware about it.

For any general violation with regard to all types of advertisements, advertising Bye-law asks the Commissioner to send a show cause notice and penalise the concerned agency at a rate not less than the maximum prescribed.

On violation for the first time fine of Rs.3,000 will be imposed on second time the amount will increase to Rs. 5,000. If the violation continues a sum of Rs. 10,000 will be fined along with the cancellation of trade license or any other license awarded by the Corporation.

How to spot an illegal hoarding?

Section 2, Norms for outdoor advertisement 3 (A) (14c) (Vii) of the Advertising Bye-law clearly states that the permit number shall be painted on the left in white against a black metallic strip along with the name of the agency should be affixed to the hoarding immediately below the vinyl/flex/painted hoarding. Have you spotted it on hoardings? If not, it could be illegal.

Section 2, Norms for outdoor advertisement 3 (A) (16) clearly says that whoever breaches the rules mentioned in the bye-laws should be issued a showcause notice.

A grace period of seven days will given to the violator to reply to the commissioner’s notice. On failing to give a reply to the notice and continuing the violation of the rules, a fine of Rs. 5,000 will be imposed. The rules also cover per-day penalty (Rs 500-750)  for violators till they comply with the rules.

Some common rules that you can keep an eye on

Areas that fall under zone A are restricted from displaying any hoardings. In zones B, C, and D, hoardings can be displayed on either sides of the road. The height and size restrictions for various zones are listed below, the violation of which makes the hoarding illegal.

However, all these rules remain only in the paper, in the absense of informed citizenry and committed officials to stop illegal hoardings.

M Krishnappa, BJP, won the 2008 Assembly elections from Bangalore South by a large margin. Read more about this MLA’s assets, utilisation of funds, performance and participation in the assembly.

Fawzan Husain, in his exhibition of photographs, captures the essence of religious experience in its most palpable moments. The exhibition is on till February 13th at Tasveer.