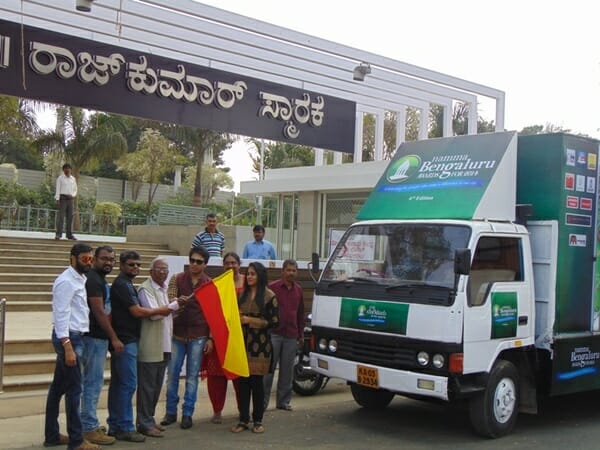 As the countdown for the close of nominations for the Namma Bengaluru Awards 2014 (NBA) has begun, Namma Bengaluru Foundation (NBF) in association with BTV, the media partners for the awards, organised the flag off of the display vehicle from Dr Rajkumar Memorial grounds at Peenya.  The display vehicle will move around the city to enable citizens to nominate their heroes from right where they are.

The vehicle was flagged off by well-known director of the Kannada film industry, MG Shrinivas who now is making his debut as an actor in his new movie “Srinvasa Kalyana”. The event was also attended by eminent jury members of the NBA 2014. The canter will ply in Bengaluru between December 10th and 15th Dec 2014. The schedule of the canter will be announced from time to time on BTV. 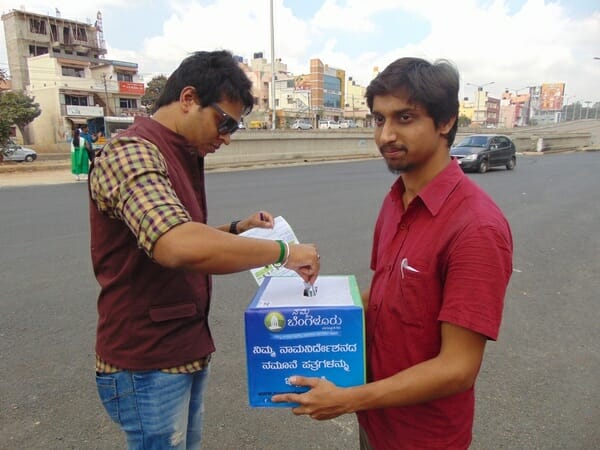 Shrinivas said: “This is a commendable initiative of Namma Bengaluru Foundation. It is important to recognise the unsung heroes of our city and honor their dedication towards making Namma Bengaluru a better place. I request all Bengalureans to nominate their heroes for the Namma Bengaluru Award.”

An initiative of the Namma Bengaluru Foundation (NBF), the Namma Bengaluru Awards are meant to celebrate exceptional individuals and organisations – nominated by citizens for making Bengaluru a more sophisticated, humane and dignified city, truly one of the best governed cities! 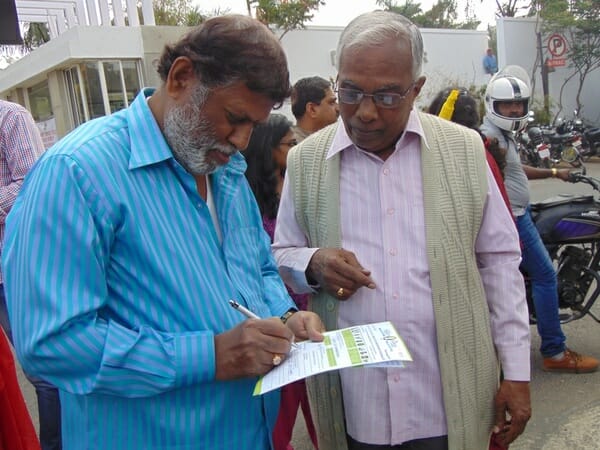 Jury member DVS Gupta speaks to a citizen about the awards. Pic: NBF

Sridhar Pabbisetty, CEO Namma Bengaluru Foundation says: “We are overwhelmed by the overall response to the Namma Bengaluru Awards 2014. As of Friday, we have received 50,000 nominations. And in the one more week of nominations that’s remaining, we hope to receive more nominations, hopefully even more than last year. It only shows Bengalureans willingness to applaud the efforts of those who go beyond their call of duty and make Bengaluru a better city. I request all the citizens of Bengaluru to nominate the real heroes whose work needs to be celebrated.”

For details on award categories, juries and how you can nominate, click here. The last date to send in nominations is December 15th 2014.

Namma Bengaluru Foundation (NBF) is an independent organisation committed to the betterment of the city of Bengaluru, through collective social engagement. The Namma Bengaluru Foundation works on public interest issues of Bengaluru through a combination of litigation, policy and broad based research, and by engaging with the communities in the city and those that matter to make a difference. We are focused on taking strategic action on public interest issues with a focus on Bengaluru and our priorities are set following a review of current and emerging issues and consultation with stakeholders.

The content has been provided by Usha Dhanaraj of Namma Bengaluru Foundation, and has been published with minimal editing under the Message Forward section, a space meant for non-profit public interest messages by individuals and organisations.

BBMP decided to redevelop 18 markets in Bengaluru. This is an appeal by citizens to BBMP to preserve the heritage markets by doing the required refurbishing, not redevelop them.

Two-hour power cuts to continue, as per area-wise schedule

BESCOM’s current load shedding schedule for Bengaluru is two hours of no power everyday – in batches, timed by each feeder station.