Members belonging to Loksatta political party on Saturday, 6 July 2013, protested against the hike in BMTC and KSRTC bus fares. They gathered at Shanthinagar bus stand and distributed pamphlets to bus commuters and the public. They raised slogans against the government for not reducing the burden on public. 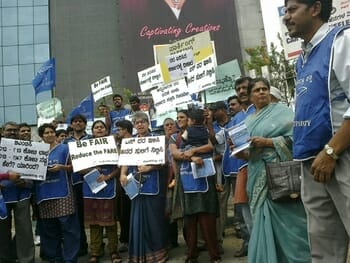 Party working committee member Ravi Krishnareddy who spoke at the protest site, said that reducing the BMTC fare by Re. 1/- is just an eye wash. Very few people who commute within the first stage might get the benefit, but majority commuters are forced to pay the hiked fares. Like other metropolitan cities, government should provide subsidy to the extent of 200 crores annually so that BMTC and KSRTC can focus on serving people rather than focusing only on making profit. Government should also remove taxation of diesel used by public transportation agencies like BMTC, KSRTC, NWKRTC, NEKRTC etc.,

Party members submitted a memorandum addressed to the CM. The protesters submitted the memorandum to Mr. Nagendra, Divisional Traffic Officer at BMTC. The memorandum noted that more than 40 lakh people use the services of BMTC everyday, making it the most important backbone of mobility in the city. It also suggested alternative measures to cover the expenses of BMTC, rather than increasing the fare.

The suggestions included introduction of a subsidy of 200 crores for BMTC in the upcoming Budget presentation, and introduction of paid parking on public roads, which will cover the cost of subsidising the public transport.

“We must never put the working poor of our city to this hardship. Transportation is an essential part of their efforts to better themselves and their families. We must give them every chance to preserve their money for basic needs and for things that create lasting value… Please announce an annual operational subsidy for BMTC, and for other city transport services in the state, and link this to lower fares,” the memorandum urged.

This article comes to Citizen Matters through Msg Forward; a service that allows citizens and organisations to issue announcements to the public. This content has been provided by Anand R. Yadwad of Loksatta and published as-is.

About Anand R Yadwad 4 Articles
The author has not yet added any personal or biographical info to her or his author profile.

More containment zones in Bengaluru, change in quarantine rules for inter-state travellers, complaints against fee hike by private schools – catch up on this week’s news, in our roundup.

Cyclists and skaters take over roads in Malleshwaram

The first Sunday of every month is going to be marked for cyclists in Malleswaram hereafter. Don’t worry if you are not a cyclist—you could learn cycling, or do something else too!