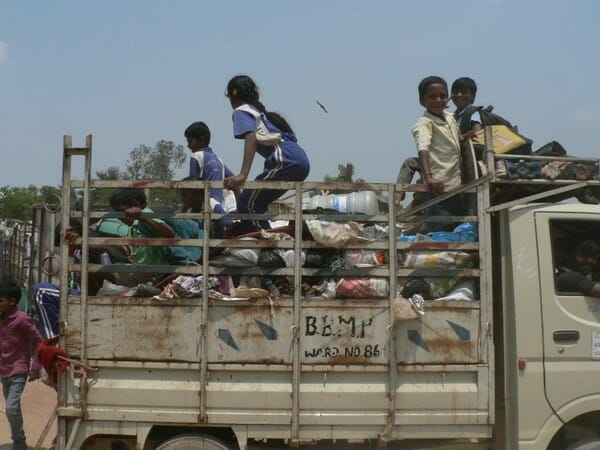 Bengaluru is a city bursting at its seams, and the consequences of rapid and untrammelled urbanisation are especially evident near its ephemeral boundaries. Tall condominiums under construction dot the landscape of areas along the eastern peripheries of the city, interspersed with patches of coconut groves that have somehow deferred their inevitable demise.

These peri-urban areas which have mushroomed over the last decade, thanks to the city’s burgeoning IT sector, are also characterised by a deficiency of public amenities or municipal services; mounds of untreated solid waste are omnipresent.

In this uncanny setting, what stands out is an oasis of blue. No, I’m not referring to any of the city’s infamous lakes, but to temporary dwellings made of tin and tarpaulin that house the newest and most vulnerable residents of the city—its garbage pickers. These are the undeclared, blue tent, temporary squatter settlements.

The Bruhat Bengaluru Mahanagara Palike (BBMP) is the local governing authority of Bengaluru, and its waste disposal services are privatised. Contractors often employ an itinerant workforce made up of new migrants to the city who work for a minimal wage in hazardous conditions, usually handling the waste with their bare hands.

This is more precarious than it sounds and has caused some rather unfortunate incidents in the recent past that has highlighted the vulnerability of the workers in the informal waste sector. In March this year, a 25-year-old labourer from West Bengal was buried alive under a mound of garbage at a landfill in Belahalli, near Bagalur.

Life on the margins

This situation, which is a dire consequence of migration, rapid urbanisation and poor waste management, is clearly illustrated in Marathahalli. Near the Munnekolala neighbourhood, there is a profusion of temporary settlements with the population comprising almost entirely communities of waste pickers. One such colony houses migrants exclusively from Karnataka’s Bellary district, which is one of the hottest and most arid regions of the state.

For Rs 6,250 a month, these migrants provide the essential service of collecting and sorting mixed waste from across Marathahalli. While their services are rendered to the BBMP, it is through a private contractor on whose land they reside. Unless they also begin to clear the waste that surrounds their own dwellings, they are forced to live among mounds of garbage and vehicles with a profusion of mixed waste which surrounds the settlement. If their predicament looks bad, it only gets worse when the rains arrive and leave behind a swamp of contaminated water.

The story of these residents is all too familiar as more and more people are moving away from their native villages due to worsening agrarian distress. While in search of a better life and livelihood, they find themselves—ironically—lacking the most basic facilities that they provide the city with. The predicament of these migrants squatting on privately owned land, presents us with a rather confounding notion of their urban identity. Are they merely itinerant labourers living within the jurisdictional boundaries of the city, or are they citizens who can assert their rights and entitlement from the state?

In this particular instance, their citizenship is conditioned by the status of their habitation. They are dependent upon the private contractors, not only for their livelihood, but also for the land on which they reside, however precarious their existence might be. Since this land is privately owned, it prevents them from asserting the rights that their tenure might otherwise provide and hence precludes the possibility of substantive citizenship granted by the state.

As a consequence, they have no proof of residence, no coverage under the Public Distribution System and no election IDs in Bengaluru, depriving them of even the most fundamental protection and agency that the state accords to its citizens. They are merely those faceless people who continuously clear out heaps of trash from the city’s streets.

The story of Bengaluru’s informal economy

While the case of this particular settlement is compelling enough, what is more significant is to acknowledge the processes that reinforce the vulnerability of such residents who are participants in The Great Indian Informal Economy, which employs close to 83% of the nation’s workforce according to NSSO 2010-11.

The informal economy has a symbiotic relationship with impoverishment in the rural hinterland, which compels teeming millions to undertake the long and uncertain journey to cities in the hope of escaping grinding poverty. They are usually employed precariously in the lowest rungs of industries in the urban economy such as construction and waste-picking.

Leading Sociologist Jan Breman, observes that this represents a continual circulation of labour, rather than permanent outmigration to the city. “Pushed out because of their redundancy in the rural-agrarian labour process, they are driven back again because of their temporary and time-bound incorporation elsewhere.”

Within the settlement, there are signs of enterprise with people trying to create value from the scrap they collect, like aluminium extracted from electrical cables and so on. While most of them seem resigned to their lot, others are despondent.

Mallesha, 19, a resident of Hospet Taluk who has recently moved to the city bemoans his predicament. “What sort of a life is this? Can’t make a living in the village, and living amidst filth here!” His most prized possession from the village is his pet pigeon that he rears in a little coup outside his shack. “He is my only source of happiness. I let him go free, but he chooses to come back to live here every night.”

About Arjun Srinivas 1 Article
The author has not yet added any personal or biographical info to her or his author profile.

For busy readers, start your week with a quick recap of some of the important headlines from your city last week.

Avoid these mistakes if you are running around in order to form the owners’ association for your apartment complex in Bengaluru.