I am not one for waxing nostalgic along the lines of “then and all, life was very simpall … now-man-days, it is all rotten sar, rotten means rotten only!” For me, history, personal history, is more often than not something to look upon with a certain amusement. Often, it is nice to revisit the past and draw whatever energy it can offer.

I remember that childhood alliances and friendships were made and broken and re-made on momentous grounds. Take for example: matches.

Not cricket matches, or the actual arsonist implements ex of Sivakasi. I refer to the labels that were stuck on the diverse brands of matchboxes. We called these labels matches. Well, one cannot, with any real basis, claim to have been part of a very smart set. But we found ways to have fun. Kids always do!

And then, we grew up.

But back to the matches.

These were lightly sewn on to largish thick rectangular sheets of paper (almost cardboard), in stacks of ten. The top-most match in a stack, the only one you could see without actually buying the stack, was the deal-maker or breaker. The remaining nine, you take a chance on them.

Each stack cost 10 paise. Said amount to be procured with considerable coaxing, cajoling and otherwise convincing the parental carbon units to part with the moolah for this purpose that had to be filed in triplicate a priori. Most shopkeepers had about the same attitude that Wodehouse has towards little kids in his novels. Little snots to be kept as far away as assiduously as possible. However, these shopkeepers wanted our money! So, to that extent, and to that extent only, they put up with us.

Selecting the stack(s) you wanted to buy was not a simple or random task. It called for utmost delicate consideration and calculated risk-taking. Do I have that one? Do any of my friends have it? There are four stacks with that particular on the top. Which one to buy?

Meanwhile, the shopkeeper used to get very impatient with this dilly-dallying. I was taking up space that he required for other purposes; namely for other customers buying small pieces of coconut kernel (15 paise) or a little jaggery that looked like the dregs from the sieve of an over-eager archaeologist (10 paise) or Nutrine chaklate (10 paise) or some such.

After much, much, vacillation, I would settle on, say, three stacks, for that is what the Esteemed Care-Givers, in their munificence and in keeping with the economic conditions of the day, had sanctioned for match-purchasing purposes.

There was a certain delectable tension in all this. The detaching – actually violent plucking – of the stack from the parent sheet had such a sense of irrevocability! Once separated, it could not be put back. So, you pluck, you pay. Well, the shopkeeper plucked, with an air of someone wanting to be rid of young pestilences forthwith. The dour plucker!

Anyway, having obtained the stacks (three, if you remember our example hereinabove), it was a tearing streak homeward, crossing the Kanakapura Road, mindless of the traffic, such as it was in those days. Having reached home, very carefully liberate the matches from the restraining strings (cotton … oh-so-organic and all) and look at each. 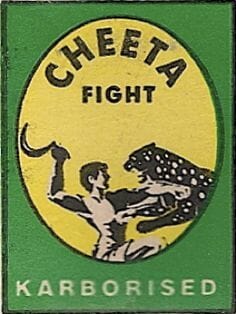 Cheeta Fight was the most common matches (I know that sentence does not scan or parse well; you will get over it). There were many others, yes. But Cheeta Fight, featuring a very impossibly muscled Rural Indian Dude, wearing a short veshti (“loin cloth” conveys a very wrong impression of his attire). His attire was minimalist, but not that minimalist.

The Rural Indian Dude seemed to be in a field of sugarcane where also the Cheeta was visiting for sundry purposes, namely meals. With the curved sickle (machchu) in hand, the Rural Indian Dude has been about his honest day’s work to earn his keep, and maintain his outlandish physique, when without so much as a ‘by your leave’, the Cheeta decides to harass him by a most uncivil pounce.

Claws out, fangs bared, ears put back … the whole a picture of the utmost menace! They happily went about marauding Rural Indian Dudes with maximalist physiques and minimalist clothing, going about an honest day’s work.

However, what they (the Cheetas) did not bargain for was that they (still the Cheetas) would meet more than a match (see what I did there?) in the form of Rural Indian Dudes of the sort described hereinabove. So, imagine then the chagrin of the Cheeta, well out of its range, as it jumps out at a good Rural Indian Dude thāli, finds the thāli not only armed, but in combative mood, objecting to the intended course of events!

All this was captured neatly by a passing artist, using very vivid colours. Thus the Cheeta Fight matches.

It is not clear how the contretemps between the Rural Indian Dude and The Cheeta worked out. In its own post-modern way in those pre-post-modern times, it was left for the viewer of the picture – i.e., me and kids like me – to figure out.

But you know what? I never gave that story a thought. Until just a few seconds ago, as I wrote the stuff hereinabove. We were busy with only one thing.

Long before the Great Liberalisation, we lived in Socialist Utopia. Even in those times, we kids had the seeds of portfolio diversification in us. We were kinda special. Gifted, if you know what I mean.

So, as soon as the markets opened, the trading would begin. “This one, I have dabbal. You?” (Double). “I have thribbal.” (Triple). “Subbanna does not have any, but he has dabbal of that one, you don’t have?” “He won’t give me, I am not talking to him.” (T-hoo) The T-hoo was broken with a sé when a Peace Deal was brokered by a mediator and Subbanna relented.

Which matches do you remember? If you never had matches … I feel great, Buddha-like compassion for you!

Shashi Verma, Chief Technology Officer at TFL (Transport for London) was recently in Bengaluru to discuss public transit with the government. In this chat with Citizens Live, he discusses bus lanes, smart cards, and solutions to Bengaluru’s traffic woes