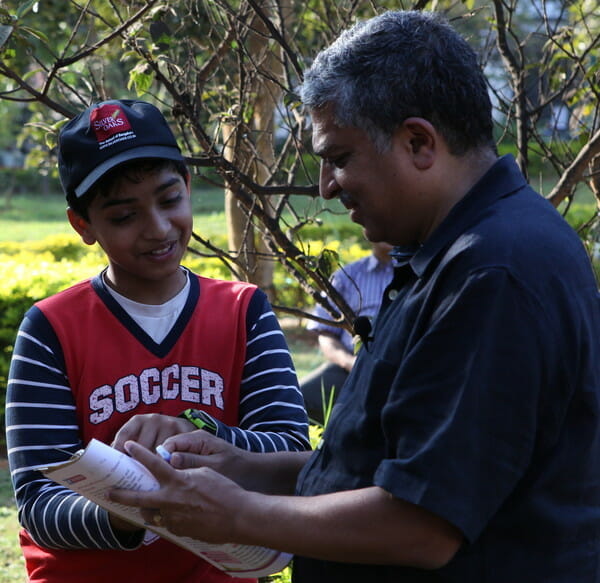 The quintessential Bangalorean. Born in Bangalore, did part of his schooling in Bangalore, was a part of Bangalore’s pride – Infosys. He was in charge of the Bangalore Agenda Task Force (BATF) and he quit as CEO of Infosys to be a part of a larger national need, the Chairman of Unique Identification Authority of India (UIDAI). He was the head of TAGUP (Technology Advisory Group for Unique Projects) for five large financial sector projects.

No prizes for guessing — yes, we are talking about Indian National Congress candidate from Bangalore South, Nandan Nilekani. His foray into politics — that too with a political party that picked him to spearhead the UIDAI and TAGUP — does seem like natural progression.

Nilekani announced his intentions of contesting in the polls on a Congress ticket early in the year. Even before he was officially a member of the INC, Nilekani was already on the road meeting his constituents, targeting them and announcing his intentions through different fora, in person, media, social media, his webpage and the internet in general. He formally joined the Congress on March 9th, 2014.

Nandan Nilekani’s parents, Durga and Manohar Nilekani, hail from Nilekani, near a small town Sirsi in Uttara Kannada district of Karnataka. Nandan was born in 1955 at Vani Vilas Women and Children Hospital, a government-run hospital in Bangalore.

His father worked as a Textile Manager at Mysore and Minerva Mills and subscribed to Fabian Socialist ideals that influenced Nilekani in his early years. Nilekani’s elder brother, Vijay Nilekani, works as an advisor to the Nuclear Energy Institute, Washington DC, USA.

With a Bachelors in Electrical Engineering, Nandan became a co-founder of Infosys Technologies, along with NR Narayan Murthy. Nandan worked for Infosys for twenty-eight years, aiding the firm to scale up and spread across Karnataka and India.

While in Infosys, in 1999, he also co-ordinated with S M Krishna government to form Bangalore Agenda Task Force. He gave up his role as Infosys co-Chairman in 2009, to take up the government position at the UIDAI, at the invitation of the Prime Minister.

Now aged 58 years, Nandan has his overall assets declared as Rs 7700 crore. His journey from Rs 200 to Rs 7700 crore, narrated in his own words, is a now-famous epic. He has two children – Nihar Nilekani and Janhavi Nilekani.

Rohini and Nandan Nilekani are known for their philanthropy efforts and have donated about 350 Crores to various causes. Rohini Nilekani has promised 20 crore annually to various organisations. Starting from a community composting centre at Koramangala to research on ecosanitation and agriculture in Doddaballapur, she donates to all good causes which the everybody else prefers not to touch keeps away.

Some prominent NGOs started by Nilekanis or funded by them are Arghyam, Pratham Books, E-Governments Foundation, Indian Institute for Human Settlements, Akshara Foundation

The crux of the Nilekani campaign is based on two facts — he headed the BATF thereby making him knowledgeable on urban issues in the city, and that he was capable of taking the UID enrolment past the 600 million mark. Both these achievements have been questioned and debated on.

The media-shy attitude of Nilekani came under severe criticism from all quarters of media. There were days when all queries on his entry into politics were met with deafening silence. However, now it appears to have been a deliberate strategy. The moment he was declared as a Congress candidate, Nilekani has become active and vocal. He now has a media team that keeps the media in loop daily on his activities and views. His recent quote on 18 year old milk and fresh water stole the limelight.

The BATF was set up by the former CM S M Krishna and its work stopped once he was out of power. Many still speak about the impact that BATF had on the city, but the fact was that it was a quasi-governmental organisation whose work could not be sustained once it was gone. In fact a similar attempt, the creation of Vision Group by current CM Siddaramaiah was stopped by the HC recently for being extra constitutional.

With regards to the UIDAI, once again while its success is measured in number of individuals alone its real value for the amount of tax payers money spent on the whole exercise is yet to be proven. Some still question the very basis of the whole exercise. However, Nandan Nilekani maintains that Aadhaar card isn’t a proof of citizenship, it is a proof of who you are.

As the election is nearing, the slugfest too is increasing. Ananthkumar, the incumbent MP who posed in Aadhaar drive photos, is now up in arms against Aadhaar. Nilekani has questioned Ananthkumar’s motives and the facts presented, and has even gone ahead with complaining to the Election Comission and Press Council of India.

Some sources in Congress party hint at a bigger role for Nandan Nilekani if the INC or UPA comes to power. That being the reason to some extent behind the peaking of negative politics at play against Nilekani, it remains to be seen whether Nilekani will be able to charm the voters to reach the Parliament.

Rajarajeshwarinagar zone has 14 wards. BJP dominated the BBMP elections – 2010 in this zone, by capturing seven wards. Here is the information related to the zone.

All you need to know about Ward 21 – Hebbal

What are the complaints bothering Hebbala voters? How much money was spent in the ward? What were the works done?

What are the complaints bothering Yashwanthpur voters? How much money was spent in the ward? What were the works done?