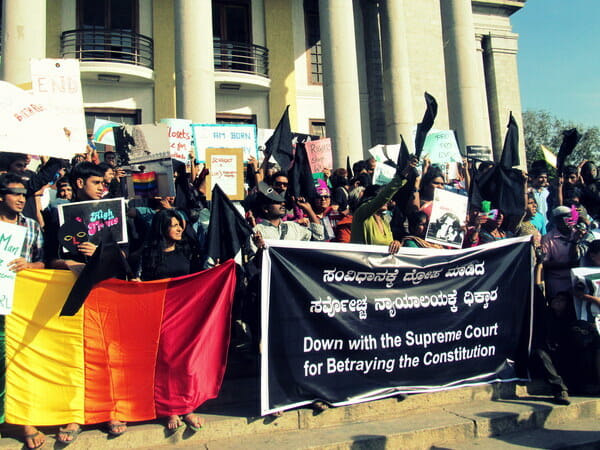 They all had planned for a gala celebration. But the Supreme Court’s judgement on consensual sex between homosexuals drove them into a rebellious mood.

“I am very disappointed, unhappy and feel voiceless. If not the Supreme Court, then whom should one go to?” said Akkai Padmashali, associated with Sangama – an NGO that is working to protect the rights of the Lesbian Gay Bisexual Transgender (LGBT) community and sex workers since 1999.

Members of Coalition of Sex Workers and Sexual Minorities Rights and Human Rights Activists gathered outside Town Hall at 3.30 pm. They demanded that IPC section 377 be repealed. They raised slogans: “My gender, my right; My sexuality, my right!” Black flags were flashed and  faces were masked to mark a black day in the Indian History.

‘No constitutional infirmity for Section 377’

The much-awaited judgment on the petition filed by NAZ foundation v/s Suresh Kumar Kaushal had sparked hopes among LGBT and Sexual Minority groups. To their dismay, Supreme Court set aside Delhi High Court’s order that looked at section 377 as violative of various fundamental rights. Instead, SC found there was no constitutional infirmity in section 377.

The two-judge bench set the responsibility to decide the fate of section 377 of IPC on the Parliament. SC called consensual sex between same sex as a criminal offence and therefore illegal. If one gets caught under this offence, he/she has to suffer imprisonment for ten years. LGBT group called this judgment as the third black day in the Indian history.

Rajesh Kumardevi, a human rights activist from Bangalore, said: “In 1975, SC upheld the declaration of emergency, which deprived all citizens of the right to life in India. In 1979, Mathuras case, SC said women who are raped should be disbelieved. Today, they held LGBT persons are not human beings whose dignity and life is violated by colonial law.”

Akkai said that the patriarchal system prohibits Indian families to accept people for who they are. A recent example of this is that of Vamshi Raju, a 21-year-old engineering student from Yeshwantapur, who committed suicide on November 26th 2013. Vamshi Raju’s parents knew about his sexuality, but didn’t accept it and constantly confronted him. On November 26, 2013, soon after the Pride March, Vamshi faced his father’s anger yet again, after which he committed suicide.

It was struggle to provide basic health services

Vinay Chandran, Executive Director of Swabhava, said: “The whole idea of initiating this petition was to provide health services to the minority community. Since HIV and sexually transmitted disease was on the rise among the sex workers and transgenders, there was a need to create awareness among them to use condoms. But since being an LGBT was a crime, no one would accept their sexuality easily. If it is a sexworker, she or he would not admit it, as it was an offence. To encourage people to opt for health services, we started this fight for de-criminalisng consensual sex.”

Section 377 will contribute to the LGBT’s agony more, as never in the past has a heterosexual been targeted. It has always been homosexuals. “SC blew off its historical opportunity,” said Vinay Chandran.

LGBTs are legal in countries like Nepal and South Africa. Rajesh asked “Why not India?”

No trust on political parties

Now that ball is in the parliament’s court, activists are weary about any positive results. Since the beginning, BJP never showed any interest to safeguard minority’s interest. Nisha Gulur, President of Sangama, says: “We don’t have hope on BJP, they are against us. But, there are other parties like Congress and JD(s) who have always supported us. We will approach them.”

Vinay Chandran is also sceptical about BJP. He said, “We will need to unite and get support from all the institutions and  politicians across india.”

The LGBT community has become more vulnerable than ever before, and is in the fear of losing support from workplaces that had very recently started accepting them.

Arnav, a 26-year-old, says: “We will have to live double lives again.” Aditya Jit Singh, a student of Global Politics and Economics, who has been interning with Sangama for a month, said: “Now fear will grow strong and our fight to liberty has become tough.”

Human rights activists are ready to fight tooth and nail with the parliament for the rights of the minority. Shubha Chacko, a Human Rights activist calling out to the LGBT community said, “Don’t be afraid and paranoid. We all are here and we will fight. It is a step back but not the end.”

Are there any errors with respect to your electricity bill? BESCOM introduces Photo BIlling technology to curb reading errors.

If you have a vehicle registered outside Karnataka for which you haven’t paid lifetime tax yet in Karnataka, you may have to pay it soon. Here’s why.