Freedom from garbage. The words have a nice ring to them, which is probably why the BBMP chose the name, KasaMuktha, for its new effort to manage waste in the city. Forced by the High Court to ensure that all solid waste is segregated at source in homes and offices, the municipality is struggling to come up with an alternative that is acceptable to citizens, and works well.

Why? Simple. All our earlier efforts to ‘manage’ trash were built around landfills. Simply collect the trash from the citizens of Bangalore, and take it away to villages outside the city and dump it there. This, in sum, was the ‘system’ in place for a long time. Contractors loved it – a wide assortment of players were paid to collect trash, to transport it, and even to dump it at the landfill site. The only thing they were not encouraged to do is reduce it!

Predictably, the rot became too intense, and the residents of Mandur village simply refused to accept their raw deal anymore. BBMP, doing its usual thing, first tried to find other targets for its dumping system, but that didn’t work too well. No one really wants other people’s trash, and in any event getting a new site ready for thousands of tonnes of trash a day is not a simple matter.

Eventually, BBMP had to accept the idea, albeit grudgingly, that it must do something to ‘reduce’ the trash. The promise of KasaMuktha lies in this, and for the moment so do the challenges. 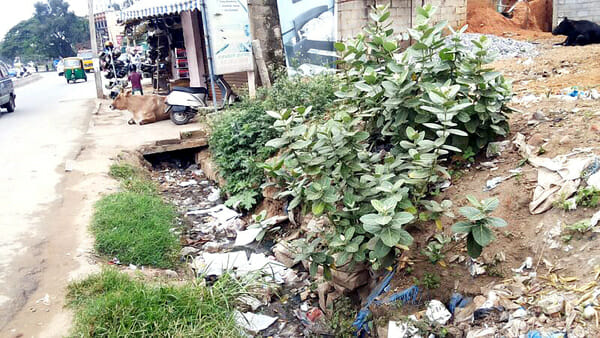 We dump our waste where we cannot see it, but whole city pays for this mistake. Pic: Shree D N

How to reduce trash?

How does one reduce the quantum of trash? Broadly there are two choices. We can either recycle and reuse more and more of the materials we trash, or we can process them in some way – e.g. incineration, converting waste to energy, etc. A combination of these two thrusts should reduce the quantities that are sent to landfills. By most estimates, more than half the stuff we were sending to landfills could easily have been recycled, reused or processed instead.

Contractors who were being paid for transporting and landfilling large quantities of trash – and not to forget, overbilling BBMP for more trash than they actually lifted – naturally resisted any move to change the system. However, the High Court’s unambiguous direction that waste must be segregated put paid to a lot of their games.

Segregation implies separate handling of different waste streams. The dry stuff goes into recycling and reuse, the wet stuff into compost pits, the bio-waste to processing technologies, and so on. But these streams of managing waste do not exist in the city. We have neglected developing any of these capacities because simply dumping the trash in Mandur or Mavallipura was so much easier.

Now, things have to change. Not only do we need to ensure the emergence of these capacities for SWM in the city, we have to provide the space to do these things. Sorting stations for waste, compost pits, bio-waste handling sites and much more facilities need to come up in different neighbourhoods, and all of this needs land.

No land for waste in city

In 800 square kilometers it should not be too difficult to find a thousand or so acres to do all this, but there is a hitch. It’s not enough to merely come up with the land. We need to come up with the land in different neighbourhoods, so that the waste from one locality is managed in that locality itself. This makes the problem more complicated, because while certain areas have land available for waste processing, others don’t.

So, BBMP faces a double-challenge. It needs to set up a whole new system of waste management, which it is not familiar with, and it needs to find land in every locality to host this system. This is far beyond the current capacity of the municipality – when the %#%#^ hit the fan, literally, the SWM division had fewer than a dozen employees, and even some of them were new to their roles. Such an under-staffed BBMP simply has no chance of putting the shiny new system in place quickly.

Decentralising, or running away?

To give itself some chance of making progress, BBMP tried to reduce its responsibility. It first declared that all bulk generators – large business campuses, hotels, hospitals, etc. – would have to manage their own trash, and that BBMP would no longer lift their garbage. It also decided that large apartment communities (with more than 50 units) should be able to manage their own trash too, and for them too BBMP would not provide any services.

That raised a lot of questions. What about the garbage cess being collected from all homes, including apartments? BBMP said it would refund or stop collecting those. What about certain kinds of waste that can only be managed by specialised handling, like sanitary waste or hazardous stuff? BBMP said it would continue to provide lifting services for those. Each time a question arose, BBMP provided some answer. Not all of these were satisfactory, but there’s only so much you can do in an ad hoc way.

Which brings us to KasaMuktha. This is the ‘remainder’ of the resposiblity for SWM, which BBMP has not been able to pass off to anyone else! In individual houses (in traditional layouts) as well as in small apartment buildings, BBMP announced that it would collect trash door-to-door, but only if it was first segregated into wet and dry waste by the residents. This waste would then be taken to either a Dry Waste Collection Centre or to a wet waste management facility. Whatever portion of the waste could be recycled and reused would be done so. The rest alone would go to landfill. In Phase I, this program would be launched only in 22 wards.

This can work, in theory. But it will take a lot of DWCCs to manage the dry waste. In every ward, we’ll need 6-10 at least, but BBMP only identified 1 location for dry waste management. This creates two kinds of problems – quantity as well as location.

No one knows what will happen if the collection of dry waste exceeds the capacity of the DWCC to sort and recycle it. BBMP says it will then designate more DWCCs, but the turnaround times for such responses can be quite long, and the waste keeps coming daily. It is absolutely essential to ensure that the infrastructure to handle all the anticipated volumes of segregated waste is in place before rolling out KasaMuktha. But the CM is eager to rid the city of trash in six months. Thus, the cart is now before the horse.

An even more vexing problem is location. It is unlikely that residents in any locality will accept waste from another locality being brought to their area for processing. Therefore, the only option is to find suitable space for DWCCs and composting in each area. This may be doable in most BDA layouts and in most large apartment communities, but is extremely difficult in the revenue layouts. The clowns who built these unplanned areas naturally used up every inch for ‘sites’, and there simply isn’t any proper place for waste handling.

Cart with no horse!

What now? Caught between the fire and the frying pan, BBMP doesn’t really have too many options. The only realistic option is to go back to the drawing board on planning, and figure out how to create, in each area, the necessary infrastructure for waste handling. This is the job that the BDA should have done, in its much-touted Comprehensive Development Plans (CDPs) produce every 10 years or so. But having let that horse bolt the stable long ago, we’re now left holding the reins. And the cart.

Solution lies within ourselves

There is a solution. It will not be easy, but there isn’t any other. In our respective neighbourhoods, we have to own this problem, and work with each other to find appropriate answers. The waste is really ‘ours’, and therefore the responsibility to manage it is also ours. It may have been convenient to let the mai-baap sarkar do this job for us in the past, but that’s precisely why we are where we are now. Time to roll our sleeves up and remember the third section of Abraham Lincoln’s famous quote – our democracy cannot just be government of the people and for the people, it must also be government BY the people.

About Ashwin Mahesh 17 Articles
Ashwin Mahesh has been involved in public policy for Bengaluru through his work with the Karnataka government. The views expressed here are his own. He is a member of the Lok Satta party. He is also CEO of Mapunity Information Services, and a director at Oorvani Media, publisher of Citizen Matters and India Together. He is also a visiting faculty with the Centre for Public Policy at IIM Bangalore.

BBMP has allocated only Rs 50 crore for Covid management in this year’s budget. Will this be enough?