It’s time to let go of your favourite horn that you chose to fit your vehicle with. Wonder why?

Bangalore Traffic Police, in accordance with the obeyance of law, has issued a notice regarding this. A pamphlet that is issued by the Police Inspector of Indiranagar Traffic Police station says that all kinds of air pressure horns, musical horns, reverse horns, hooters, trumpets and other devices that are fitted on vehicles, that produce an unduly harsh, loud or shrill or alarming noise, and the horns that are not fitted by the manufacturers should be removed with immediate effect. 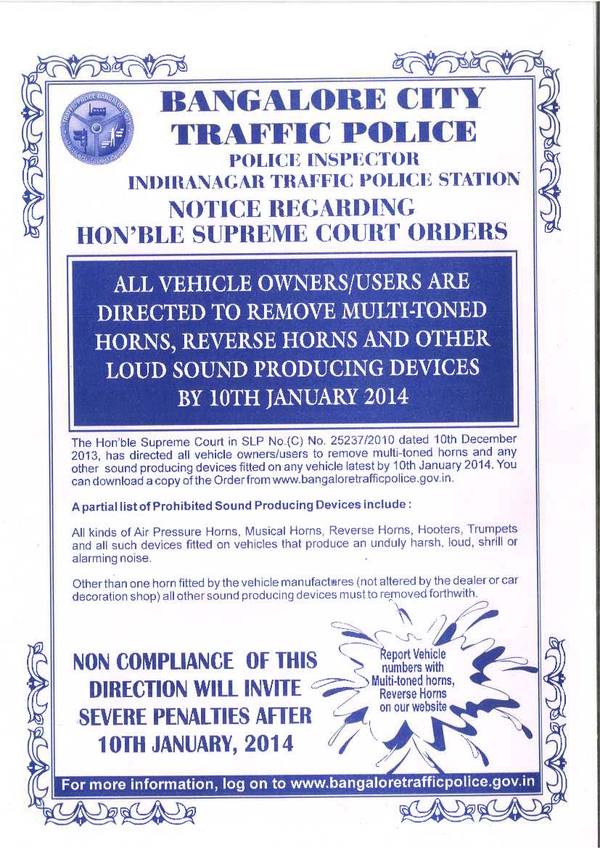 Non-compliance with this rule will attract penalties after January 10, 2014, says the brochure. A call to the Assistant Commissioner of Police Traffic South East (Adugodi) Division (9480801805) confirmed the same. However, the notification isn’t available on Bangalore Traffic Police website. The police official who spoke to Citizen Matters said that the pamphlet is being circulated through emails and facebook.

Children from a school on Bannerghatta road and CMCA volunteers walked to create. Here is a report on the activity.

Mountain to climb for disabled

Bangalore Centres for Aadhar cards are not well equipped to facilitate physically challenged people. UIDAI’s special schemes are not known to many.

As the BBMP Council’s term ended on Thursday, the state government has appointed an administrator who will now decide on all affairs of the city. Catch up on this and other news from the past week, in our roundup.