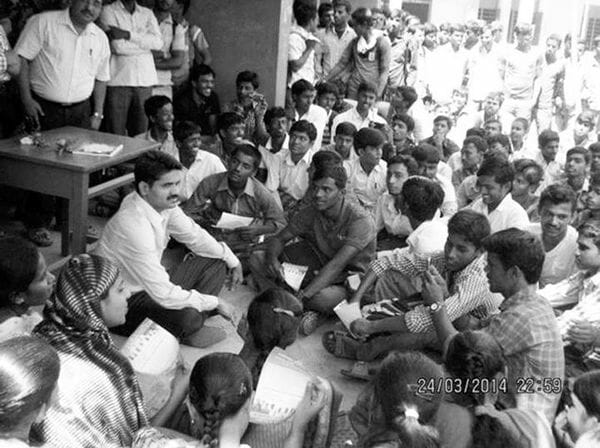 The news of the death of D.K. Ravi, former Deputy Commissioner of Kolar District, has come as an absolute shock. Ravi was transferred from his position in Kolar to Bengaluru, where, as Deputy Commissioner in the Commercial taxes (intelligence) wing, he launched a series of raids and investigations into Bangalore’s builder companies. It is said that these raids had discovered huge levels of tax evasion.

Ravi is said to have committed suicide in his flat yesterday (March 16th 2015). However, as far as we know, there is no suicide note. Foul play is not ruled out.

I met Ravi just once; several years back, while I was on my short annual stint, conducting my classes as part of the training for IAS officers in the Mussoorie academy. Years later, he helped out in a personal case of mine. My friend and I had purchased a stretch of non-agricultural land in Avani village in Kolar for our childrens’ museum project and we had to wait for months together to get the Panchayat khata transferred in our names. The process, registered under the much touted Sakaala system, had got stalled because there was confusion whether the land needed to be surveyed by Revenue department surveyors, before the transfer could be authorised. (In fact, once it was known that the process could not be completed within the stipulated time, my record disappeared from the Sakala pendency list – but that is another story!).

Ravi provided a systemic solution, which applied to all cases of the sane nature as ours. He stated that there was no need for a survey by the revenue department, because the land was already measured earlier and records existed. Thus, the path was cleared for the issue of the Khata (It still took six months more, because the Panchayat secretary had lost the digital signature – so much for e-governance; but that is another story as well).

Ravi was well known and loved by the people of Kolar. He was an honest and proactive individual; a combination that is sadly rare these days. It is said that he was transferred from Kolar prematurely, because he stopped the encroachment of a government tank bed by a builder-politician combo – they wanted to provide the essential service of a golf course in drought stricken Kolar.

When Ravi was transferred from Kolar, there was a spontaneous reaction from the people. There were agitations and protests all over the district. I got a call from a friend from Kolar. Could I intervene?

I did not think it was proper that I do something without consulting Ravi. So I called him.

Did he need any help? I asked. You could talk to me freely, I said. I know how lonely it is to be honest, straightforward and committed to doing something. No, he said. He was packing his bags to move to Bengaluru, to take up his new assignment. He would go wherever he was posted by the government, he said. We promised to keep in touch.

What, or who, killed Ravi? Did the pressures of his lonely commitment to the cause of systems and honesty get too much for him to bear? Or was there foul play? It is said that he had received threats from Bengaluru’s notorious land mafia, closely intertwined with builders and political interests.

Today, there are protests across the state. In Kolar, there is a bandh called. The PUC exams have been postponed, because the police fear there could be disruptions. In Bengaluru, the AAP is protesting outside the town hall.

Will this tragedy be the breaking point? Will this lead to a crackdown on the unscrupulous interests that have made Bengaluru into a living hell? Will this awaken Ravi’s colleagues to speak out, rather than looking away? A lot of corruption happens because the honest withdraw into themselves, justifying their current inaction by memories of failed attempts at being proactive in the past.

Corruption is a team sport, like football. People work in concert; they have plans, back up plans, and pass the ball from one to another. Honesty, sadly, is an individual sport, like golf. The honest play alone, they see other honest people as their competitors, rather than as their team members. True, this is sometimes necessary because those you may like to trust, may turn out to be untrustworthy. Yet, the loneliness of the honest makes their causes all the more difficult to achieve.

If we are clean, that alone is not enough. We MUST team up. That is the ONLY way that corruption syndicates can be tackled. We must pass the ball amongst ourselves, like the corrupt do.

I hope that Kejriwal, Yadav and Bhushan are listening.

About T R Raghunandan 10 Articles
The author has not yet added any personal or biographical info to her or his author profile.

Red board v/s black board buses

Chief Minister B S Yediyurappa has backtracked on his decision to ban firecrackers this Deepavali. But we can still push the administration to ensure that only green crackers are burnt in Bengaluru, that too during the specified timings.

Of courts, judges, lawyers and environmentalists