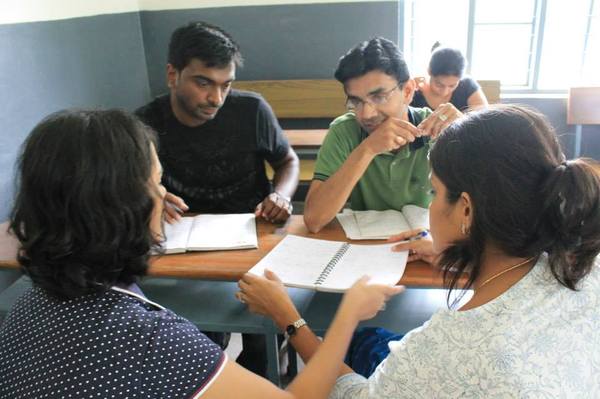 Here is a good news for all “Kannada premigalu”, whose resentment has been growing over years on the ailing status of Kannada in Bangalore. Contrary to the doomsday predictions for Kannada language, many non-kannadigas of Bangalore who were earlier stuck at “Kannada Barolla” are showing interest to learn the local language. The Silicon City is witnessing this trend over  last few years, which has resulted in popping up of many Kannada courses and Kannada learning websites.

As Bangalore evolved into the IT capital of India, it has embraced people from not only other parts of India but also across the world. Modern Bangalore now has immigrants constituting more than 50% of the total population.

While demographic imbalance in Bangalore is rapidly changing as Hindi and English are ascending, thereis a simmering discontent among Kannadigas. The major complaint is about unwillingness of immigrants to learn Kannada. But the reality is, the necessity to speak in Kannada for non-Kannadigas has become almost nil with the massive change in the demography and lifestyle of Bangalore, and of course because of the multi-linguistic skill of the Bangaloreans.

However, the trend is changing now. Non-Kannadigas are showing more and more  interest to learn the state language. This change has stemmed from many factors ranging from necessity to cultural perspective. Here are some of them:

Apart from these, we have some more interesting reasons, which might look quite funny, but are the real driving force for many who are learning Kannada. “Almost every day, for one or the other reason I have a tiff with the auto driver. And they always overpower me by using the local language. So I always dreamt of a day when I can yell at them and give them back nicely in their own language. You feel at home only when you can fight in the local language.” giggles Reema, (name changed) who has picked up the language quickly. Suman is learning Kannada as she is getting married to a Kannadiga and her in-laws can speak only Kannada.

Starting from a handbook like Learn Kannada in 30 Days to weekend crash courses, non Kannadigas are now exploring ways to enter the rich world of Kannada. Apart from Bangalore Tamil Sangam, Kannada Prasara Parishath which have been conducting Kannada classes for several decades, many Kannada enthusiasts have also recently started Kannada coaching classes.

Have you ever thought that speaking Kannada is not prestigious? Dare not. Because, now you can hear Kannada ‘A Aa e ee’ even in one of the posh and happening places which reflects the vibrant and lavish lifestyle of Bangalore. The Cafe Coffee Day Square, just opposite to prestigious UB city in the Vittal Mallya Road now hosts weekend Kannada classes!

For Prashant Krishna who is a Sales Manager in ING life, Kannada is an obsession. The author of three Kannada books, he conducts Conversational Kannada classes in this café every weekend. For those who want to learn Kannada within a cozy atmosphere this is an ideal place.

His approach in teaching Kannada is different, with more of interaction and opportunity for role play. “I focus entirely on conversational skill. Many who want to learn Kannada don’t want to sit in the conventional classroom set up for hours. Here I provide them with a day to day situation which they have to handle in Kannada. Other features like valet parking, Wi Fi, good coffee and snacks are value additions,” Prashanth explains.

Ask him about the amount he charges for this course. “Rs 9999 for the complete course which has total eight classes. It is not a big amount when you consider the place and features we provide. I believe best things in life come with a cost. A best thing like Kannada can happen in your life only with a best price,” he smiles.

“But, if anyone after learning conversational Kannada wants to learn reading and writing then I teach them free of cost. That is my way of saying kudos to their effort.” he adds.

“When we realised that many non-kannadigas are really interested to learn the language, but lack professional guidance, we launched this school.” explains Sangamesh H, co-founder, Kannada Learning School. Sangamesh and his friends Raghavendra, Chandra and Anudeep, all employees of a multinational company, used to teach their colleagues a few Kannada words during coffee breaks. When the crowds grew, they decided to take it up in a professional manner. Kannada Learning School, which celebrated one year of its successful existence recently, has also published a handbook for learning Kannada.

“There is no need for a reason to learn the local language. I wanted to learn Kannada just because I am living in Bangalore. Actually I never faced much difficulty in Bangalore with regard to the language. So it was not my need, but my interest which encouraged me to learn Kannada,” says Vidhya Ramasubban, who has already completed the basic course at Kannada Learning School.

“We came to Bangalore five years ago, but it was only when my daughter joined school that I realised how important is it for me to know the language which she was being taught. I couldn’t help her in studies. That’s when I decided to go and learn Kannada,” saysSreelekha Sudhakar,a Tamilian, who did not know even a word of Kannada last year. However, that changed when she joined a Kannada class a few months ago.

While most students enroll under the basic speaking class, there are also a few who go a step further. “After finishing the speaking course, I decided to go for the reading and writing course. Now I manage to read bus numbers, destinations and also the newspaper. It takes time but it’s not impossible,” says 50-year-old P K Tyagi, an Air Force staff. “Now my children have started asking me to translate words and sentences for them,” he adds proudly.

In response to the growing demand, some others have also taken up Kannada teaching as profession and are offering private home tuitions. Within a span of two to three years, several websites have sprouted with free Kannada lessons — kannadabaruthe.com, mathadi.com/learn-kannada   to name a few.

A very popular book on Kannada learning which was first published in the year 1972 by its author N D Krishnamurthy, is still going strong, even after its 12th edition. The book titled Conversational Kannada from Prism Books is finding a new popularity after completing its successful existence for four decades. Also many MNCs in the city are conducting courses in conversational Kannada for their employees.

Kannadigas not willing to speak in Kannada!

However, most newbie Kannada learners are facing an unexpected situation. That is, the inhibition of Kannadigas to speak in the local language publicly. “When we try to speak in Kannada with our Kannadiga colleagues they don’t show any interest to take Kannada conversation further. As a fact, they don’t speak Kannada at all,” says Kavitha, a software employee. This is a common complaint of many non-Kannadigas.

The good news is that, things are changing on this front too. “The younger generation now is not only loving Kannada, but doing much more to popularise the language. This is clearly evident in online forums,” says Raghavendra of Kannada learning School.

Veteran Kannada writer, Jnanpith awardee, Chandrashekar Kambara, is all appreciation for these Kannada groups. “Now these young groups are doing all those works which the state government is supposed to do. From Kannada speaking classes to Kannada software development, these youths are taking great interest,” he says. ”Bureaucrats are the ones to be blamed for the status of Kannada today,” he complains, adding that officials never worked to promote or develop Kannada.

Now things are changing. Many have understood the fact that for a true Bangalore experience, learning some basic Kannada is a must. Learning Kannada has become a priority for those who come to Bangalore to work and eventually end up settling here. So don’t be surprised, if we hear more of “Kannada Barutthe” in the near future.

In the next part, get some tips on learning Kannada easily!

With inputs from Sunita Rajendra and Nivedita Niranjankumar

About Arpana H S 10 Articles
The author has not yet added any personal or biographical info to her or his author profile.

The chief minister’s ABIDe task force released Plan Bengaluru 2020, calling it a ‘dynamic document’. Alas, all this with no city council yet.

In its third edition, nominations have been opened up for six categories. One of them could be Bengalurean of the year.

The collective outrage in Bengaluru after the Delhi incident has been quite visible both on the streets and in social media. Thousands were involved, and this time was different from earlier protests.