A couple of years ago, the government came up with a hare-brained plan to construct underpasses on Sarjapur road. The sole reason for this was to benefit a private builder developing a large area on the wetlands of Bellandur lake. The residential areas along the way would have been decimated, but that was of no concern to the powers that be.

Citizens went to court and finally a negotiated settlement was arrived at between citizens and the government. A government-appointed commission, in its final report, stated that the real problem was on Hosur road and that had to be treated first. This involved widening Hosur road at the Madiwala junction. Whilst this was absolutely necessary given the traffic scenario in the area, there was a small problem… Some of these belonged to local politicians. Obviously, nothing was done on this road.

Now enters MA Saleem, the new Additional Commissioner of Police for Traffic. Overnight, the traffic police converted the 120 feet Sarjapur road into a one-way road. Saleem proudly claims that traffic is now flowing smoothly on Sarjapur road. Of course it will sir, it is 120 feet wide!!! 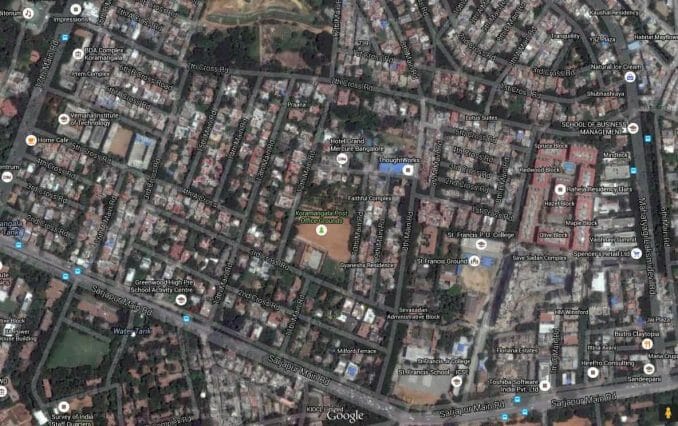 A view of Koramangala 3rd Block from Google Maps

The impact on the immediate neighbourhood, of converting this stretch into a one-way, is totally ignored, and rejected as collateral damage.

When Citizen Matters spoke to MA Saleem, he mentioned that the traffic police was in talks with a traffic consultant who would be putting together a one-way traffic impact report. This report would measure the impact of the new traffic arrangements in Madiwala on the current traffic situation, as well the neighbourhood. The traffic police would then implement changes as per observations in the report. Saleem also added that the report would be out in a week’s time.

Traffic expert Sanjeev Kumar, who is preparing the report, said that work on the report would begin only by end July, since they had to wait for 3 months from the day that the decision was implemented. He mentioned that it would be ready by mid-August.

Both Saleem and Kumar stated that whatever solution they came up with to ease the traffic, would be beneficial for commuters, as well as residents of the area.

Residents living on one side of this super highway cannot get their cars out of their homes. One could be crushed by a speeding bus going to Salem. Doctors of St John’s Hospital cross the road every day, not knowing if they will make it across alive. But then why bother? These guys are not responsible for the next promotion or transfer.

To add to the woes of the residents, a section of the service road from Aishwarya junction to St Francis School is also made a one-way. This service road now becomes in effect a lane of Sarjapur road, in the opposite direction!

These roads were used by a large number of residents, many of them senior citizens for their daily walk. But today, the lanes are death traps for the innocent septuagenarian or the ignorant child who dares to use them. Added to this, is the noise pollution that is indescribable.

The residents have petitioned and met police officials at various levels. However, the pleas have fallen on deaf ears.

The mantra seems to be this: I have to get the traffic moving. If your lives are devastated as a result, tough luck!

Sarjapur Road-Madivala one-way: A tragedy for residents
The deadly road to Madiwala…

About Dr Radhakrishnan 1 Article
The author has not yet added any personal or biographical info to her or his author profile.

With a powerful board and loose definitions, DNA Bill is a recipe for disaster

Centre for Internet and Society registers its dissent over new DNA Bill draft, and explains how it does not address the privacy concerns despite a seemingly powerful language.

OneBengaluru for saving the lakes

Less than half of the lakes in the city have survived. But citizens’ initiatives have managed to rejuvenate a few. Here’s an opportunity to save more.