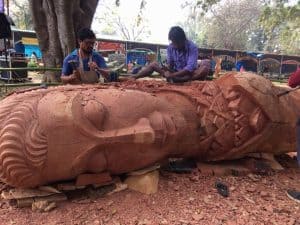 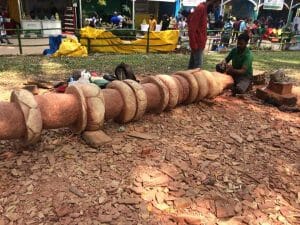 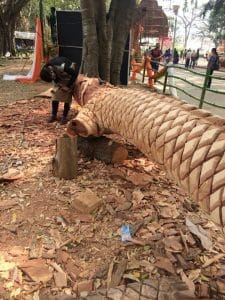 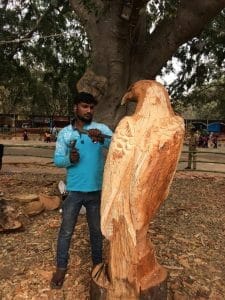 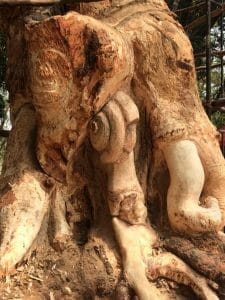 An artist friend insisted that I visit Lalbagh to check out his buddies sculpting dead trees at Lalbagh. I was intrigued and strangely had not heard about this from any other source. Also the customary visit to the flower show was pending, a ritual that cant be missed twice a year,  I headed off to Lalbagh this afternoon.

As we approached the glass house on either side we spotted logs of wood taking different shapes and forms – Buddha, Ganesha, crocodile, a peacock  to name a few. Perched on a scaffolding was well-known Bangalore artist John Devraj working with an electric saw and sawdust flying around him. A sketch was clipped on to the tree that outlined the outcome of his sculptor.

As we walked around the art camp with chips of wood under our feet, an artist explains his work. He has sculpted a landscape to show rocks and clouds and another artist was working on a cityscape. He was from Baroda tells us that there were artists from all over the country in the camp – Shantiniketan, Baroda, Bengal, Hyderabad, Mumbai and Bangalore. We also learnt that this was one of a kind initiative and first ever in the country where trees that were dead and even sold were been given a new lease of life by an artist who intervened with this idea.

And then I met my friend’s buddies – Sharan from Ramanagara and Kantharaj from Bengaluru. Their masterpiece is a mango tree which Tipu Sultan planted on his birthday and its 280 years old. Sharan passionately explains his piece of art that defines the very nature of a mango tree that bears fruit year after year and is symbolic of the mother giving birth to a child that looks out from the womb in wonder.  The artist beside him is working on an Australian Eucalyptus tree which were originally meant to be planted in Ooty but then just a few found their way to Lalbagh. The form of the tree was kept intact and the artist has visualized a bird and the tree lends the grace and movement to his imagination.

The artists have a deadline which is the 27th of January and Sharan said he was confident that all artists will complete their work since most were works in progress. And what happens to all these once they are complete? Madan an artist from Bangalore walks by to introduce himself, tells me that he is documenting this as well as working on a piece. All of the final sculptures will be installed in Lalbagh eventually. But before that they will be treated naturally, no chemicals will be used he said. They plan to coat an oil and he exclaimed that each tree may need 500 litres of oil.

The flower show was bland in comparison, but nevertheless we did take our customary selfies to share with friends. Spotted an innovative water dispenser, which was installed for the public and came across a smart sugarcane press that doled out delicious juice with just a touch of a button. Heartening when innovation touch the common man. Lalbagh’s flower shows always have a special feel for us old Bangaloreans and felt proud of what I experienced today.

About Pratima Rao 3 Articles
The author has not yet added any personal or biographical info to her or his author profile.

Fear of an epidemic looms at Shamanna Gowda Layout

With the retainer wall near storm water drain demolished by BBMP, people are left in lurch as water from the drain wreaks havoc in this layout.

Milan Luthria plays to the gallery, but makes his questions relevant to his audience. Vidya is bold, provocative and even outrageous, but she is never vulgar.

If you get hungry at midnight

There are not too many options to eat out late night…Why can’t eateries atleast be open?