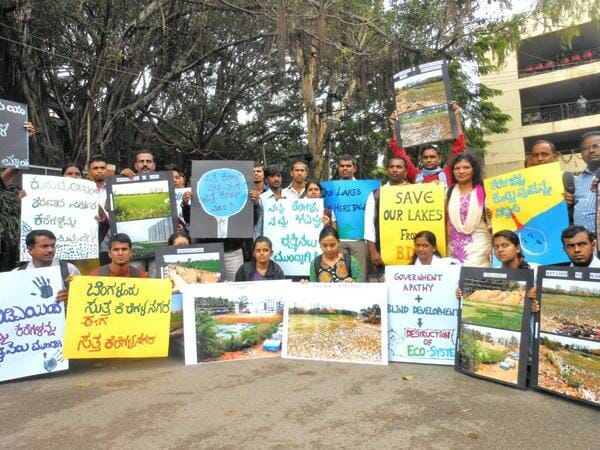 Citizens protesting silently in front of BDA against its inability to protect lakes. Pic: Nikita Malusare

At 9:38 am on Friday, May 9th 2014, the BDA office was yet to open, but members of the People’s Campaign for Right to Water – Karnataka were already present, protesting silently against the government’s increasing apathy towards lakes in the city of Bengaluru.

Pictures speak louder than words, and this was affirmed once more in the protest as no one uttered any slogan. They held posters that showed the current scenario of the lakes in general in the city that are being turned into dumping grounds for debris and garbage or encroached to make way for roads.

Friday’s protest was against the dumping of debris atChunchugatta lake in South Bangalore, not even a kilometre away from the Sarakki lake, on which a PIL is being heard in High Court of Karnataka. However, members of the group say that their voices are against the apathy of the government towards all the lakes in the city.

Dr. Kshitij URS, a member of this group and author of “Resisting Reform? Water Profits and Democracy” said: “Bangalore’s water level has fallen almost four times over a decade. At present, the water level is at 1,200 ft, below which there are only fossils.”

Falling water levels and increasing building construction have awakened Bangaloreans to the need to protect their resources from further destruction. Every month, at least one civic group stands up to save Bangalore’s dying lakes.

What led to the protest?

Soon after the Lok Sabha elections got over, members of the People’s Campaign for Right to Water – Karnataka found out about illegal dumping of debris on the banks of Chunchagatta lake. They immediately filed a complaint with the BBMP, BDA and BMTF. However it has been over 15 days and no action has been taken.

Meena P, a social activist and a member of the group said that they have knocked on the doors of the BBMP and BDA commissioner but all of them claimed they did not have jurisdiction to deal with the lake. She added, “The BDA commissioner says that removing encroachment is the responsibility of the Revenue Department, not ours. The BDA has lodged a police complaint at the local police station and also with Bangalore Metropolitan Task Force. But authorities are yet to take any action.”

Meanwhile, the protesting group itself lodged a complaint at BMTF against the encroachment. BMTF took cognisance of it and wrote to BDA asking them to survey the land and submit its findings.

Meanwhile, P N Nayak, Engineer Member, BDA told Citizen Matters: “The BDA is just a rejuvenating and development authority. It is the Revenue Department that can survey and take action accordingly in such a case. At present the District Level Committee of Lakes, set up by the High Court, is in charge of protecting the lakes of the city. It is only they who can take a decision on this.”

In the writ petition 817/2008 filed by the Environment Support Group, the High Court had ordered the formation of an Apex Committee and a District Level Lake Protection Committee. However, Dr. Kshithij pointed out that the committee was formed only when the petitioners filed contempt of court against the Chief Secretary.

The Chairman of the Committee is the BBMP Commissioner. In one of the meetings held in his office, Commissioner Lakshminarayana told Dr. Kshithij that he is aware that he is the Chairman but beyond that, he has little knowledge of what power lies with the position. The government is yet to inform him about his powers.

Kshitij said, “There is no single window access if people want to report on encroachment. The state has very cleverly designed processes with so many loopholes. One of the loopholes is to hand over the lake to many departments. So no one knows who is in charge of a particular lake. Everytime we go to an office, we are told that the matter is not within its jurisdiction and we have to go to some other department.”

Meena P and M.Eswarappa, members of the People’s Campaign for Right to Water, pointed out that a  Detailed Project Report drafted by BDA for this project revised the area of the Chunchagatta lake from 14 acres 14 guntas to 20 acres 31 Guntas. However, a board put up by the Forest Department there says that the measured area of the lake is 28 Acres 31 Guntas.

Meena P said, “I don’t know whether this has been done on purpose or not. But figures vary and encroachment is visible.” She also said that no buffer zone of 30 meters was being maintained near the Chunchagatta lake with regard to construction works.

HC orders yet to be adhered to

Sarakki lake lies a kilometer away from the Chunchagatta lake. After more than a year of constant petitioning by the group, it finally filed a PIL in the High Court of Karnataka, WP 17464/2013. The HC ordered BDA to survey the lake, upon which 135 encroachments were noted, mostly by commercial buildings and temples. Following this, in 2013, the court ordered the removal of these encroachments but the orders are yet to be implemented.

Raising concern over the 123 lakes under BDA, Dr. Kshitij said, “Encroachment in 123 lakes would amount to huge acres of land, which is under BDA. Water is an elixir of life and important resource, we need to save it.”

The press release from the campaign group says: “All this shows a very clear pattern where the BDA may actually be involved – either through commission or by omission – in promoting encroachment and the ultimate destruction of lakes in Bangalore… If we are to save our lakes, we need to stop the marauding done by the BDA.”

The group demanded that the Government should initiate criminal cases against those who allow such encroachment to take place. Only then will there be some kind of progress in the work. They should also allow people’s participation in making such decisions, as that will ensure accountability on the part of the government.

On Friday, the group waited for the BDA Commissioner to arrive till 11:30 am. However, officials informed that he had gone for a meeting at Vidhana Soudha and would be late. Until then, Nayak from BDA addressed the crowd. He told people about the BDA’s inability to take action and said, “BDA is keen on removing encroachments on lakes. Soon after the elections, the District Level Lake Protection Committee will resume their meetings in which the leaders of the group can participate and accordingly action will be taken.”

Later in the afternoon, the members of the group met BDA Commissioner T Sham Bhatt. He told them that it would be impossible to take any action till May 20th, 2014. However, he too assured them that the District Committee for Protection of Lakes will resume the process and discuss the protocol. He also told them that BDA will take up eight lakes every month for development.

Take action before Somasundara Palya Lake is lost forever
Illegal dumping at Somasundarapalya lake: Will the authorities intervene?
Sarakki Lake too gets residents to champion its cause

Should the BMTC hike public bus fares while the State is spending heavily on roads that will encourage private transport? Bus passengers write to the government, saying no to fare hikes.