The Karnataka State Pollution Control Board (KSPCB) has introduced new norms for nitrogen level in the treated water that comes out from a sewage treatment plant. The step is meant to control nitrogen levels in the drinking water bodies.

The new standards are made applicable to all STPs including those in Residential Apartment Complexes, Commercial Complexes and the large STPs of Urban Local Bodies ( ULB) such as City Municipal Corporation, Town Municipal Corporation etc. in Karnataka. The new notification limits Ammonia Nitrogen content and Total Nitrogen content to 5 mg/L and 10 mg/L respectively in treated domestic sewage.

The KSPCB takes refuge under the plea that the Notification has been issued following a direction from the Central Pollution Control Board – Delhi (CPCB ) dated 21-08-2015 to enforce these new rules.

Let me explain why I feel both agencies, and the KSPCB in particular have missed the wood for the trees and why this is a knee jerk reaction similar to several others which we have now come to expect from such “expert” bodies constituted by the Government.

1. From a reading of the brief narration given of the CPCB Direction, it is clear that the rules must be made applicable to Large STPs of ULBs and not to distributed, decentralised small, mini and micro STPs in Residential apartment complexes.

2. Has the KSPCB got any expert technical opinion or has it conducted any public consultation before applying the rules across the board to all STPs?

3. Has the KSPCB done even a cursory study on the technical and practical feasibility of enforcing these rules in the Micro and Mini STPs?

4. Has the KSPCB explored other alternative technologies, methods and means of reducing Nitrogen pollution in the lakes and water bodies? Is Nitrogen control in the STP at great cost, expenditure of energy and chemicals the only solution?

The answers to all these questions can only be a resounding NO.

Why is the new nitrogen level impractical?

For Small/ Mini/ Micro STPs in apartments, imposing stringent Nitrogen standards is not warranted. More so, since nearly 60 % of the treated water is reused for gardening, car washing and flushing. Even the balance 40% of water does not reach any water body which is a source of drinking water.

Imposing Nitrogen standards will entail additional treatment units calling for additional space, expenditure of more energy and usage of chemicals, all of which is practically next to impossible in an existing STP.

To put some numbers to the matter at hand, a typical 100 KLD STP operating satisfactorily using any of the conventional biological treatment systems will carry about 20 mg/ L of Total Nitrogen as N in the treated water (Wastewater Engineering – Treatment & Reuse : Metcalf & Eddy – TMH edition 2003 Pg. 62)

This translates to 2 Kg of Total Nitrogen per day. And if only 40% of the total treated water is disposed off from the premises, it works to a totally insignificant amount of 0.8 Kg per day from a 100 KLD STP. And the new notification of Total Nitrogen of 10 mg/L means that the saving to the Environment is a paltry 0.4 Kg of Nitrogen per day. We believe therefore that imposing Total Nitrogen standards for Small/ Mini and Micro STPs defies technical, commercial and practical logic and is therefore totally unwarranted.

It would also appear from a close reading of the operative part of the Direction of the CPCB dated 21 April 2015 cited by the Board, that the CPCB direction is intended to apply for large and mega STPs of Urban Local Bodies such as City Municipal Corporation, Town Municipal Corporation, Town Panchayat, Notified Areas etc. in Karnataka. The CPCB direction does not mention distributed small/ mini/ micro STPs in Residential or commercial complexes to be brought under the ambit of their Direction.

Further reading on this subject leads one to believe that the CPCB direction is also in part based on the CPHEEO Manual (2013) on Design and construction of  Sewage Treatment Facilities, Chapter 5 which prescribes these stringent standards only when the “discharge is into Surface Water to be used as source of Drinking Water.”

Here is an alternative method to beneficially harvest Nitrogen in sewage and make money instead of pouring money down the STP drain.

About 25 years ago, I was summoned by Srihari Khoday, the liquor Baron of the day in  Karnataka to study treatment plants in their breweries and distilleries. When the main discussions concluded, as an aside, Mr. Khoday asked me for my opinion on the technical feasibility of harvesting Water Hyacinth (Eichhornia Crassipes) on a commercial scale from lakes in Bangalore, more particularly Bellandur (Yes – Bellandur was polluted even in those days). 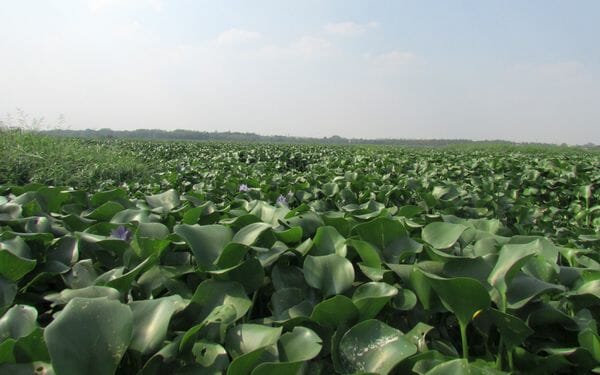 Water Hyacinth takes up huge quantities of Nitrogen and phosphorus for growth and becomes biomass which then can be anaerobically digested to generate Methane and energy therefrom and supply power to nearby industries. The largest consumer in the vicinity was Hindustan Aeronautics Limited ( HAL). 25 years ago, this struck me as a revolutionary idea.

Maybe the Babus in those days were equally insular to practical ideas and solutions as they are even to this day: Srihari Khoday’s idea could not find the wings to take off. I have myself proposed very economical, practical and executable solutions to resuscitating defunct STPs in Bangalore to all the authorities in the Government directly concerned. Needless to say, they have fallen only on deaf ears.

A related study that indicates the potential of water hyacinth to produce large amounts of biomass which can be potentially used as a feedstock to produce methane: Productivity and Nutrient Uptake of Water Hyacinth, Eichhornia crassipes I. Effect of Nitrogen Source

For the insignificant amount of Nitrogen that may be discharged from small/ Mini/ Micro STPs of  residential or commercial complexes, imposition of the new Total Nitrogen limit is not warranted. The KSPCB can consider reviewing, reconsidering and withdrawing the Notification prescribing Nitrogen standards for Small/ Mini/ Micro STPs attached to residential apartment complexes, Layouts, Commercial Complexes, Industries etc. Instead of it, let nature do the cleaning and let us use it to produce biogas.

About Ananth S Kodavasal 4 Articles
Dr Ananth is the founder of Ecotech Engineering Consultancy, a Bengaluru based company specialising in wastewater treatment. With 30+years of work experience, his interests are in water resources management and wastewater management. He is a certified Lead Auditor for ISO 14001, Environmental Management Systems.

Can we achieve urban sustainable mobility in Bangalore?

Ideas flew around my head, ideas so foreign sounding for me coming out of India and Bangalore where the only thought of providing solutions by my state government, was to cut down our trees and widen our roads.

The Chief Electoral Officer has published a new set of voters’ lists for Bangalore on 28th January, 2013, but lakhs of legitimate voters are yet to find a place in the rolls