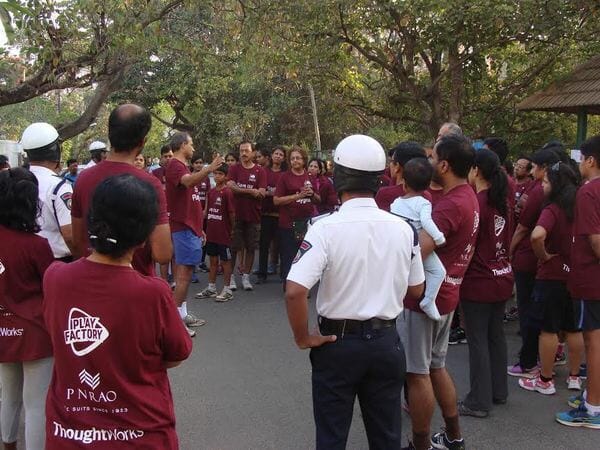 Over 300 residents showed up for the Save our Playground walk/run event. Pic: Nitin Seshadri

A civic amenity site located contiguous to the BBMP Playground in Koramangala 3rd Block had been allotted by the BDA to M/s Ananda Social and Educational Trust, an organisation whose principal trustee is Mr Radhakrishna, the son-in-law of Mr Mallikarjun Kharge, a senior Congress leader.

The site has been in the possession of the trust for over 20 years, but no construction work had been taken up by the Trust in spite of several extensions granted. In 2008, the then BDA Commissioner, Siddiah, had cancelled the allotment of land to the trust, citing failure to construct even after repeated extensions. However, Siddiah’s successor as BDA Commissioner, Bharat Lal Meena revoked the cancellation after a representation from the Trust promised to take up construction immediately.

What has been particularly disconcerting to residents is the blatant violation of all setbacks and construction at variance with the sanctioned plan. Residents have also apprehended encroachment into the BBMP Playground and have written to Joint Commissioner, BBMP (South) and the Bangalore Metropolitan Task Force. So far, even with a serious issue of encroachment into public spaces, no action has been forthcoming.

Responding to the letter written by the Koramangala 3rd Block Residents Welfare Association, a team from the BDA visited the site and issued a letter to the allottee on February 29th 2016 asking the Trust to remedy the setback violations found, and not take up any further construction work until then.

Residents have also requested the BDA Commissioner Mr Sham Bhatt to facilitate allotment of an alternative parcel of land to the Ananda Trust in lieu of the disputed portion, so that the integrity of the playground can be maintained. Even this request has not been met with the corresponding level of seriousness from the BDA.

The area is also zoned as ‘Green’ which represents ‘Parks and Playgrounds’ in Revised Master Plan (RMP) 2015. According to RMP 2015, an allotment of a civic amenity Site for another purpose requires BDA to ascertain the wishes of the local residents and ensure that the allotment is of use to them. That condition has not been complied with either. BDA is supposed to ensure that layouts maintain 15 per cent open ‘lung space’ norms. In Koramangala, the lung space area is today barely per cent.

RWAs say no to commercialisation on residential streets
Rs 50,000 to clear garbage from an empty plot?
Who encroached Bengaluru? Here’s what the government data says

Get to know what master plan is all about, think about it, write and win the prize! Engage in making Bengaluru better!

The 4th Edition of the Namma Bengaluru Awards is launched. Over 4 weeks, Bangalore will nominate their heroes; Eminent Jury Panel of 21 members will pick the winners.