Just as the new Prime Minister, Narendra Modi took charge, there were reports of an MBA student interning at Bangalore, being arrested under section 66A of the Information Technology Act 2008, for sending an anti-Modi MMS on WhatsApp. This was the second such case to be booked under the section in 12 days; the first was when a man in Goa was arrested for posting an anti-Modi comment on Facebook.

The Goa arrest was made on May 12th, before the election results were declared, while the Bangalore arrest was made on May 24th. This raised questions on freedom of expression, satire, humour, offense and hatred. Many Bangaloreans were worried as to whether their right to express on social media has just been limited. In this backdrop, Citizen Matters explores the issue. 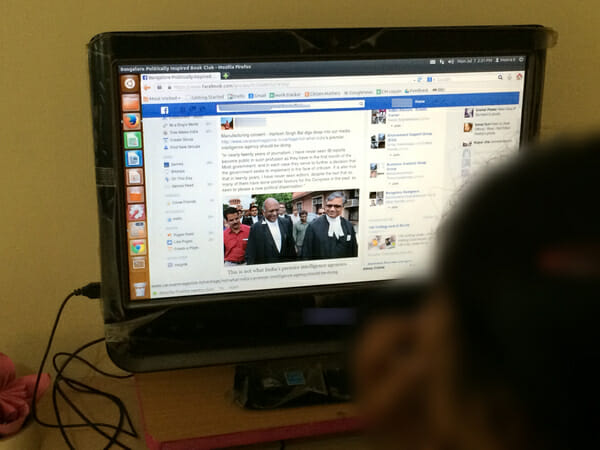 The Bangalore arrest was a result of a complaint lodged by an RTI activist, Jayant Mukund Tinaikar, living in Belgaum district. In his complaint, Jayant alleged that he received an offensive message against Modi on WhatsApp on May 16th.

This complaint was later sent to Bangalore’s Cyber Crime Branch for further investigation. The crime branch found that the message originated from Sayed Waqar, an MBA student from Anjuman Institute of Management in Bhatkal, Uttara Kannada district. Waqar was in Bangalore for a month-long internship.

He was booked under Section 505 of the Indian Penal Code (IPC) for issuing statements amounting to public mischief, with intent to cause fear or alarm and Section 66 of IT Act for sending offensive messages through communication service.

This was not the first time where a person was arrested for raising his or her opinion on social networking sites or apps. There have been several such cases in the past as well.

In the seven years since the amendment of the IT Act, to incorporate Section 66A in 2008, it has been heavily criticised for being unconstitutional and ambiguous. Most importantly, its violation of the Article 19(1)(a) of the Constitution of India that guarantees freedom of speech and expression has come under heavy criticism. Several Public Interest Litigations have been filed in this regard.

Supreme Court advocate Pavan Duggal, a specialist in the field of cyber laws and a Panel Member at Permanent Monitoring Panel for Information Security, jovially refers to the section 66 A as ‘Mother India’ because its provisions are so vast and huge in ambit, that anything and everything can come under it. “Section 66 A puts one’s neck under chopping block,” he says.

The ambit of the phrase ‘grossly offensive and menacing character’ goes beyond the constitution of India, according to him.

He says the section gives unbridled, absolute powers and discretion in the hands of two entities: the complainant and the police. At the time of registration of the case, as FIR depends on the interpretation of the post by the complainant, on what is of grossly offensive or menacing character.

Experts have noticed distinctive pattern in the cases that are registered under this section. Pavan says, “Invalidly, it is used as a tool to perpetuate harassment in online activity. An activity which is bonafidely done… Mostly the cases registered are by the rich and the powerful people. If a common man tries to file a complaint, he may have to go through a lot of challenges.”

Advocate Danish Sheikh who is working with Alternative Law Forum, and is an expert in laws related to Free Speech and Homosexualitites (LGBT) says, “Typically the cases booked under the section are not against personal remarks, but were moreover against political comments. The basic idea of democracy, which is free speech, is threatened by this section.”

The Act says, “any person who sends, by means of a computer resource or a communication device,

a)  any information that is grossly offensive or has menacing character,

b)  any information which he knows to be false, but for the purpose of causing annoyance, inconvenience,  danger, obstruction, insult, injury, criminal intimidation, enmity, hatred, or ill will, persistently by making use of such computer resource or a communication device,

c)  any electronic mail or electronic mail message for the purpose of causing annoyance or inconvenience or to deceive or to mislead the addressee or recipient about the origin of such messages,

shall be punishable with imprisonment for a term which may extend to three years and with fine.”

Experts of the of the IT Act have heavily criticised the section for having adopted from the UK Communication Act 2003 and the Communications Act 1988. Both the acts are applicable only when the communication is directed to a specific person.

Snehashish Ghosh, Policy Associate at Centre for Internet and Society, says in The Business Line : “Section 1 of the Malicious Prosecution Act begins stating that, “any person who sends to another person.” Therefore it is clear that the provision does not include any post or electronic communication which is broadcasted to the world and deals with only one-to-one communication.”

Who can file a case?

Anyone can file a case under Section 66A. If your comment, post, pictures circulated via communication devices are found to be offensive or a threat to a person, community or to the nation, you can be arrested under this section.

Superintendent of Police, Cyber Crime Branch, Bangalore, D Roopa says: “Till date, people who were booked cases under this act are mostly zealous political leaders who want to create impressions about top leaders. There has been no case where police has taken a suo motu action and booked someone under Section 66A.” She adds that it is not even right for a police officer to take suo motu action, until there is threat to the communities, integrity or sovereignty of the nation (terrorism, naxalism etc).

In November 2012, a PIL was filed by Delhi-based Law student Shreya Singhal, challenging the vagueness of Section 66A of the IT Act, and its inability to judge with objective standards, which makes one susceptible to deliberate abuse.

The Advisory mandates police take arbitrary action, without the approval of officers, not below the rank of Inspector General of Police (IGP) in the metropolitan cities or Deputy Commissioner of Police (DCP), or Superintendent of Police (SP) at the district level.

Advocate Pavan Duggal finds giving the police officers such discretionary powers, makes it more dangerous and a potent weapon to use against anybody. Gautam Bhatia an expert in Free Speech said, “The history of the relentless abuse of Section 295A, 153A of the IPC and Section 66A of the IT Act 2000, demonstrates that neither local police, nor magistrates can be trusted with sensible application of these sections. If the SC is to give this manner of discretion, it needs to be accompanied with clear guidelines about the scope of the section.”

However, Advocate Danish Sheikh feels the provision is necessary. “There is a need to have layers of decision makers to ensure that the right decision is taken. This will safeguard people from unnecessarily getting prosecuted under the law,” he says.

In the second part of the article, Citizen Matters tells you what care you should be taking while communicating electronically.

A year ago, ward committee meetings started in Bengaluru. Then why is it that citizens still don’t have a say in the governance of their wards?

Bengaluru’s 25-year-long fight for ward committees: is this a win?

Today people in Bengaluru can nominate themselves to volunteer as a ward committee member. But it didn’t happen overnight – the struggle for ward committees lasted for almost 25 years! Read the story of how ward committee came about.