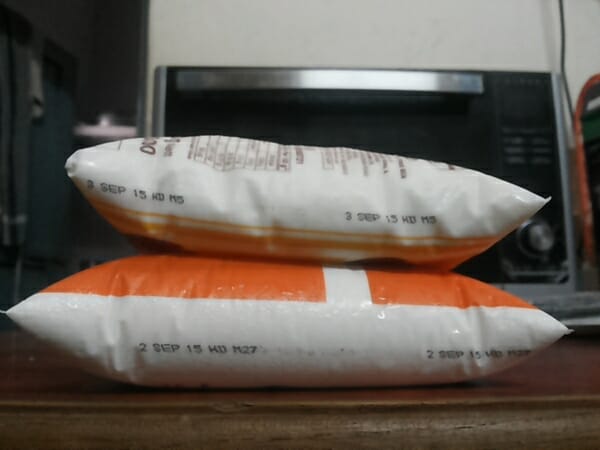 Nandini curd and milk packets bought on the same day. Both show different dates, with no clarity on whether it is use-by date or date of manufacture. Pic: Shree DN

Milk has benign associations – of innocence, goodness and wholesomeness, unlike other (invigorating) drinks. But Nandini milk, marketed by the Karnataka Milk Federation (KMF which boasts of being one of the largest in south India) is calling those images of wholesomeness into question with tactics that flout statutory guidelines.

KMF issues clarification, agrees to put ‘Use By’ on stamping

With reference to your News Report “KMF Nandini Milk: mislabelling, lack of quality and what more?” we wish to clarify as below:-

1. As per the modifications in Food Safety and Standards Regulation, the packs of food with less than 7 days shelf life shall compulsorily print “Use By Date” & it is not mandatory to print date of packing.
2. Details of ‘Use By’ declaration are mentioned on rear panel as”; “Use By Date -See stamp”, Accordingly the ‘Use By Date’ is printed on the sides of the pack.
3. The milk in packets has 48 hours (two days) shelf life & curd in packs has 72 hours (three days) shelf life. Hence, milk and curds packed on a given day will have different “Use By Date”. To illustrate, milk packed on 1st Sep 2015 shall have 2nd Sep 15 as ‘use by date’ & curd packed on 1st Sep 15 shall have 3rd Sep 15 as ‘use by date’.
4. In order to ensure that there is further clarity in this regard to consumers, KMF will ensure that all dairies will print “Use By” along with date of coding.

In 2004, I wrote about how milk pouches were being sold with “tomorrow’s date” stamped on them, without indicating whether it was the date of packing or date of expiry. Which meant customers buying pouches that were a day old, would be misled into believing that it was “today’s milk”. This amounted to cheating, and flouting the statutory rule about stamping the date of packing, especially for a commodity as perishable as milk.

Over three decades ago, we at the Consumer Guidance Society of India (CGSI – India’s oldest consumer protection group) at Mumbai had lobbied hard to make the stamping of expiry dates mandatory for perishable packaged food items. On 25 May, 2007, I again wrote about this malpractice in my column on consumer rights, about “tomorrow’s milk” being sold today (you could buy milk on May 24th, with the stamp saying May 25th, without indicating whether it was date of packing or expiry date). Leftover pouches could thus easily be sold off as “fresh” supply. My report brought a response from KMF saying that they were “taking appropriate action.”

Now, 11 years after my first expose, Bengalureans are still able to buy milk on July 23 marked “July 24.” Citizen Matters and I did some research, and found that some pouches (especially the one litre packs) did say “Use by” but others (especially the half litre pouches) only have a date marked, without specifying whether it is date of packing or date of expiry. This amounts to cheating tens of thousands of consumers, and flouting the law.

Phone calls to the KMF numbers brought no response. At Malleshwaram and Jayanagar, I saw on August 31, half litre packs with just dates. It is not even a question of lack of space to print “use by” because some pouches do indeed have that phrase, so what’s going on?

There have also been, predictably, reports of milk curdling frequently in the last few days, even when used on the date stamped on the packs. Customers cannot return faulty or curdled packets to the sales outlets, under the rules. When asked, the vendors refuse to take responsibility and put the blame on customers, with ready statements like “you may not have washed your vessel well” or “something might have falled into the vessel”.

Reports of Nandini curds also going bad are also coming in. Especially during the Vara Mahalakshmi festival last week, people in many areas were left with curdled milk packaged as ‘curd’, which tasted bitter, which probably happens when there is excess of sodium bicarbonate in the milk which stops the fermentation process, and stops the milk from being converted fully to curd.

Did KMF learn nothing from the media exposure condemning its malpractice, in 2004 and 2007? Did their PR response (we are looking into it… etc) mean anything? For a while, “tomorrow’s milk” was indeed stopped being sold today, but we seem to be back again to the old lackadaisicalness again. True, the supply of milk might have been increased due to the extra subsidy given to milk suppliers. But there has to be a good way to use the milk, instead of finding backdoors to push this to innocent customers.

I had also written about how the price of Rs 29 for a litre is sometimes misleading – if I am given two half litre packs, I am charged Rs 30, not 29. “Our supply is mostly of half litre packs, which cost Rs 15, we don’t get enough one litre pouches delivered,” explains one Nandini outlet manager. But the larger question, of why the “use by” phrase is dropped from most pouches, remains unexplained. Just one more instance of a government undertaking taking the public for a ride with impunity?

Beware! The milk you buy may not be safe enough
When Nandini Good Life milk went bad…
Milk is safe, but be careful with meat

Data-based decisions will help BBMP thwart infrastructure problems forever. That’s what Bengaluru needs to do: letting data and metrics shape the future of the city.

BMTC conductors unwilling to give tickets for short distance travels

If the conductor takes money and doesn’t give you the ticket, ask for the ticket. If not…

BMTC cannot cope up with the city’s exploding need for transport. One option is to end its monopoly status.