The Fugees’ rendition of “Killing me softly with his song… “ is beautiful and an all-time favourite. Though it was recorded in 1996 I have begun to identify with it especially of late, but with the lyrics changed. I could spontaneously hum “Killing me softly with your smoke…”  every time my lungs are filled with acrid smoke from the many ‘Bangalore trash’ fires and I find it difficult to breathe.

Garbage is being burnt with impunity, apparently under your and the BBMP’s watchful eyes! It has increased manifold across the city over the past nine months and is symptomatic of apathy and complete disregard for the health of residents of this city. A thick haze or smog covers my part of the city, the Begur ward, all 24 hours, seven days a week.

Let me show you a couple of pictures taken from my balcony of the daily burn, the toxic smoke from burning of hazardous waste – which I understand consists of organic, medical, sanitary, plastics to name a few –  from one such area near Nice Road, within sight of the BBMP Begur office. 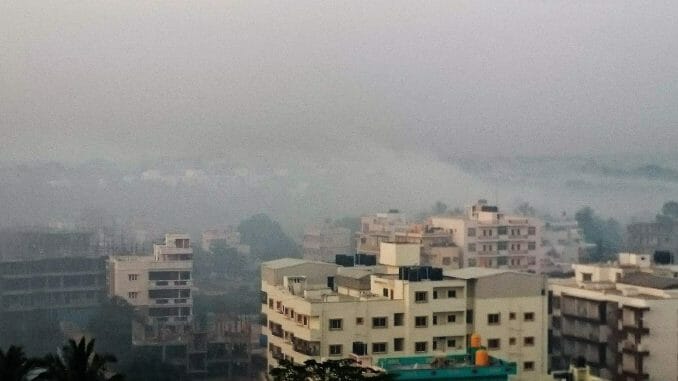 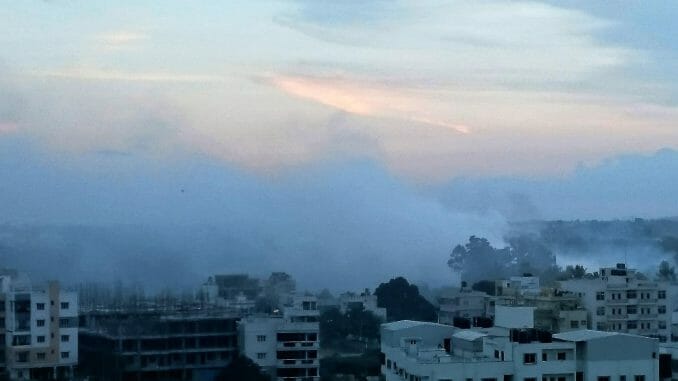 Only the infrequent thundershowers provide some relief but unfortunately, it has not been raining of late.

After several complaints, we are given to understand that BBMP has filed cases against this specific vendor burning trash across the NICE Road from Basapura and others. Court cases against your vendors who are indulging in this activity? Presumably your vendors cannot burn trash without your permission. The laws you are equipped with give you the rights to shut down facilities instantly or stop the burning especially by your own contractors, and yet you choose to seek the court’s intervention, knowing it will be delayed?

Your reasons for non-action or avoidance may be many such as tons of piling garbage, but none can possibly be above the health of the residents. A once beautiful garden city with clean environs and air, Namma Bengaluru is going to the dogs and very little effective action is being taken to keep the city clean.

From a recent study that I conducted as part of my Environmental Management course work, I found that our laws are clear and fair, whether they relate to solid waste management issues or pollution or environment; what seems to be the problem is implementation and enforcement. In the city of Bengaluru inside BBMP limits, you are the primary implementer and authority.

Earlier it was essentially garbage on the ground, but now it is also visibly in the air. From my recent study, I also got to know of the solid waste challenges and the good work being done by BBMP. However, I find this utter lack of action in regard to fires set by your contractors and pourakarmikas unpardonable.

Can you and your team help stop the city from the Great Burn? Vehicular pollution does enough harm to the air and this non-stop burning of garbage is only supplementing it! I would really appreciate your response in the form of unambiguous, immediate and neutralizing action!

Even as I write this, I can hardly breathe in the acrid, particle laden smoke in my 7th floor bedroom, but I must as I have no choice. It is a sad state of affairs indeed! However, ever the optimist, I visualise a truly clean, pedestrian-friendly Bengaluru soon. I presume it is not too much to expect that I, and the others including your children, family and friends, will be able to enjoy smoke free air in the city, well into the future.

A concerned young student and citizen,

Residents struggle to breathe as garbage fire continues third day at Bellandur
This neighbourhood in Electronic City is choking!

About Aditya V Potapragada 1 Article
The author has not yet added any personal or biographical info to her or his author profile.

How does Akrama Sakrama affect you?

If you are a law-abiding citizen, you will have to learn to live with building violations in the city. On the other hand, if you have deviations in your building, this is your chance to regularise them!

An impact study of pedestrianisation of Church Street shows high acceptance among citizens, and a remarkable improvement of overall quality of life.