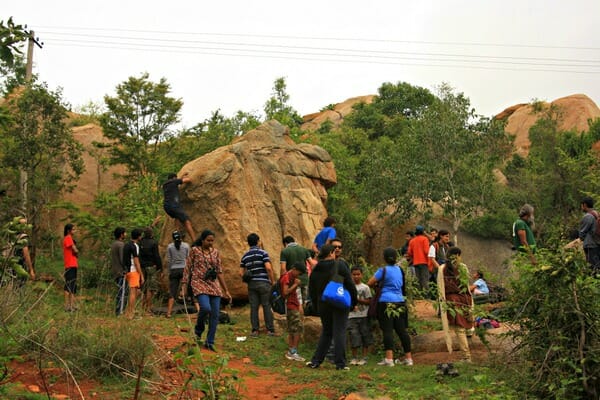 Dr Vishnuvardhan was a dignified and mature actor in the film industry, a good human being – a veritable pride of Karnataka. It is in the fitness of things that such a person is remembered for long, by way of a suitable memorial in his honour.

However, a memorial is anything to commemorate a person or an event. It does not, necessarily, mean a construction with bricks and cement only! Bengaluru is overflowing with such constructions already. That has been the bane of our city, which has made the city lose its long-held sobriquet of the Garden City! Do we need to add one more structure to honour the memory of the great actor – a structure which will eventually be dwarfed by many more which will spring up all around it?

There are different ways for us to remember a person, and pay our tributes. The said memorial, presumably, is designed to come up near the Turahalli Forest area off Kanakapura Road. This is a wonderful opportunity to embellish the natural environment already present there.

Vishnu Vana – Plants and trees can be planted in the allotted area, and the green cover can be increased, over a period of time.

Vishnu Sarovara – An artificial water-body can be created; this will also help the birds that come to nest in the forest nearby, and on the trees in this area.

Vishnu Ranga – A natural open air theater can be included in the area, built from boulders, dead logs, and similar materials available from natural resources, to encourage artistes in the name of the late actor.

I am sure there are many creative architectural minds around, who can conjure up something novel along these lines. Such a memorial will be a novel tribute to the memory of the renowned artiste, and will ensure that his memory will remain ‘evergreen’.

Vishnuvardhan’s original name was Sampath Kumar. Sampath means wealth. Can we honour him by creating a ‘Prakriti Sampath‘—a wealth of nature—in commemoration of his life and achievements?

About Gadadhar Prem Kumar 2 Articles
The author has not yet added any personal or biographical info to her or his author profile.

BMTC buses to get safer with the Durga alarm

Durga Foundation and BMTC team up to make travel safer for women and children. The Durga alarm will help alert others in case of harassment on BMTC buses.

As COVID cases rise in Bengaluru, the dilemma is between ensuring citizens’ safety and opening up the economy. Redesigning our public spaces may be the best way to ensure both these.

She represents the best of citizen activism

Manvel Alur, 44, CEO and Founder of Environmental Synergies in Development, represents the best of citizen activism in Koramangala.