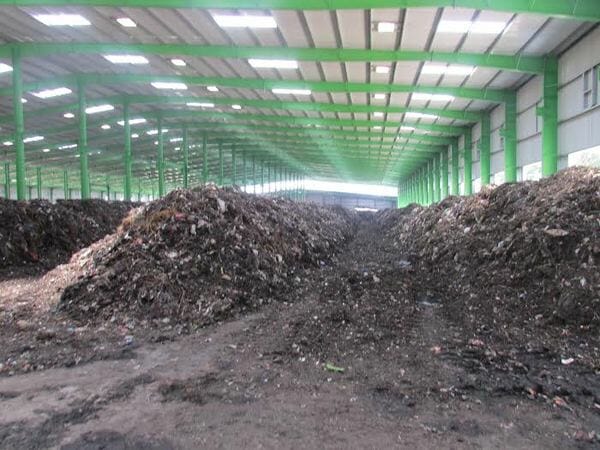 KCDC is accepting more garbage than it can handle, due to  pressure from the BBMP and the High Court. Pic: Akshatha M

The Karnataka Compost Development Corporation (KCDC) which was recently mired in a controversy over sale of burnt garbage packed in bags meant for vermicompost, is in trouble yet again. This time the problem lies in the inability of the firm to process the existing waste.

Unprocessed garbage dumped in a large quantity in the KCDC yard is emanating stench causing discomfort to workers at the unit and residents of the neighbouring areas. Ramakrishna K, a resident of Somasundarapalya contacted Citizen Matters on Thursday (June 11th, 2015), and complained that stench had been emanating from KCDC plant for over a week, making it unbearable for people in the neighbourhood. There were many others who alerted Citizen Matters, in the last few weeks, about the increasing smell from KCDC.

The headless KCDC is going through tough times. In the absence of a Managing Director, the authority required to sign documents and approve payments, the unit has stopped functioning. Sources in KCDC say that composting process has completely stopped at the yard as the payments for diesel and power are yet to be cleared.

“We could not ask the BBMP to stop dumping of garbage in the unit, because, if we do so, garbage will pile up in the city. Therefore, we are allowing the intake of 100-150 tons of garbage per day which is now being dumped haphazardly in the yard. Approximately 350-400 litres of diesel is required for machines to operate on a daily basis. The work has been stopped as there was no MD to sign the bills for buying diesel,” said an officer from KCDC who didn’t want to be named.

In the absence of  windrow composting which involves turning the garbage, the dumped waste is generating leachate, emanating smell.

After Managing Director L N Belavanki retired on May 30th, 2015, the corporation remained headless for 10 days. Ideally, even if an officer retires, he/she will be asked to continue in the post on a temporary basis till the appointment of a new officer, or the officer will hand over the charge to his subordinate.

However, when L N Belavanki was relieved from his post, neither was the charge handed over to his subordinate nor was a new officer appointed in his place immediately. Considering how sensitive the issue of garbage is and the fact the High Court is monitoring the garbage issue constantly, the delay in appointing a Managing Director has made things worse at KCDC.

Ramegowda, Officer on Special Duty to Agriculture Minister, says that the government has passed an order appointing Ganesh Naik as the Managing Director of KCDC and he is likely to take charge on Friday.

Over 60,000 tons of garbage dumped in KCDC landfill

The primary concern of residents in the HSR Layout neighbourhood is the dumping of over 60,000 tonnes of mixed garbage. KCDC Chairman Anand Kumar said that when the dumping of garbage was stopped in Mandur, KCDC began to receive more city garbage than it could handle. The unit received almost 1.15 lakh tons garbage in 2014 of which 50,000 lakh tonnes were processed and composted, while the remaining 60,000 tonnes of garbage remained as is in the yard at the site.

The dumped garbage which was kept open for a long time has now been covered with one inch of soil, making the situation worse. “Apart from handling the everyday waste, we are more worried about disposing the mount of garbage that has been dumped in the premises last year. The mixed garbage has begun to release leachate and is likely to affect the groundwater table and Somasundarapalya lake located adjacent to KCDC unit,” the Chairman said.

Anand Kumar claimed that he had stated before the High Court in April that the unit in HSR Layout cannot take further waste till next year, for which the Court took exception and rapped the KCDC for blocking the supply of waste to the unit, instead of assisting the BBMP to process the waste. The HC also issued an order to the government directing to hand over the charge of KCDC to BBMP for a period of three months.

Who did it and why?

Meanwhile, the Court also directed the KCDC to ensure that the inert waste in their compound is to be taken to a landfill meant for dumping of inert waste and submit a report on this in the next hearing. The KCDC and the BBMP found an easy solution and created a landfill in KCDC premises itself.

Going by what different sources who do not want to be named say, there seems to be a conflict of interest between the KCDC, BBMP and the Special Commissioner for Solid Waste Management, Darpan Jain. Kumar has said that 50,000 tonnes of garbage was dumped in landfill within KCDC premises as per the directions of Jain.

Darpan Jain was not available for comment. The garbage PIL has been scheduled for hearing on today, June 12, 2015.

With limited machines available in the KCDC, it seems almost impossible to process the old garbage. Moreover, due to segregation at source not yet fully effecgive, KCDC which is supposed to receive only organic waste for composting, continues to receive mixed garbage, comprising of plastic and other waste. After composting, 40 per cent of the total waste is again dumped in the unit premises.

MLA backs citizens protesting against KCDC
Will the KCDC neighbourhood finally be free of smelly nights?
How is wet waste processed at the KCDC?
The story of the first composting plant in Bengaluru
Karnataka composting firm back in the limelight
Can of worms opens up after govt composting firm sells garbage as vermicompost
Govt composting firm to review ties with Terra Firma on supplying organic compost

Two-stroke autos: banned but not out; going electric could be a solution to pollution

Retrofitting old two-stroke autos with an electric engine could be a noiseless, non-polluting solution to air pollution. However, government subsidies are not yet being offered to those looking to go electric.