Another year, another bandh. It feels like 1991 all over again. Those empty roads, those days of being at home on weekdays, having to converse with parents in Kannada outside home. But yes, 1991 was definitely worse. There was news of people moving back to Tamil Nadu weeks before the final order. There was a build up. When the final verdict came and cities erupted, there was a sense of inevitability to it. Then there were shoot-at-sight orders and cops milling in front of the house in Chamarajpet. We camped on the terrace, more curious than worried – at 11 you had a strong sense of “it happens only to others”. A policeman in helmet saw us and motioned us to get inside. I remember being scared. It was “shoot-at-sight” and he had seen us! A few days later curfew was removed and things limped back to normal, like they do always. Until 1992’s Babri riots.

25 years on, there are buses and cars being set on fire. Hotels being raided based on “tip-offs” about Tamilians camped inside. Hapless souls stuck in the wrong places at the wrong time. I saw a two-wheeler being chased by a police van turning right near our house’s corner. I also saw two lorries, their main windscreens damaged being escorted by youngsters on bikes to a corner where a road ends. I thought they were going to set them on fire. They were only saving them and keeping them out of harm’s way.

I remember 2013’s rains. I checked imdaws.com for daily rain data and tallied it up to see what record was going to be broken each month that year. It was a good year for rains. I remember 2014 being talked about as bad for India, but things weren’t so bad in Karnataka. We managed. I was in the Western Ghats in 2015 at the end of August. It was dry. People were distressed. The tea shop uncle near Unchalli falls was lamenting the lack of rains. The same trip in 2013 to the same neighbourhood felt like “Oorella bachhilmane!” (Entire town like a bathroom) It was that wet! There was none of it in 2015. Not even leeches.

I haven’t been that side in 2016, but I can see enough in Bengaluru. This is September, supposedly the wettest month of the year. Barring some clouds and rain during the first week, it has been bone dry. June and July were wetter than usual. In fact, the rains during those months broke records! August and September barely registered. It hasn’t just been the lack of rain. It has been odd! And yet, KRS barely got to 100ft before being brought down to 89. Dead storage is 74. And this will need to sustain cities and farmers till June 2017 when it might, hopefully, rain again.

I am not too hopeful. Monsoons are known to follow a 31-year-cycle of excess rain followed by less rain. If you had to guess which cycle we are in now, you’d say the less rain one. It has been mostly deficient years since 2000 with a few normal/excess years. Except that we are actually in the middle of an excess cycle! The deficient cycle was from 1960s to the middle of the 1990s. The current cycle should thus last for another 10 years during which there could be some revival. Yes, there is El Nino, La Nina and all that. But on average it needs to be excess. It isn’t. 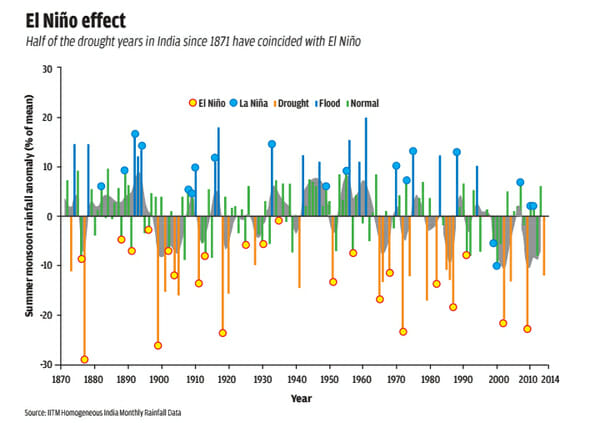 Graphics courtesy: Down to Earth

A lot of this is/could be due to Climate Change, that elephant in the room waiting to run around trampling everyone. Given rising temperatures and that rainfall patterns are expected to change towards more days of intense rainfall, things are only going to get worse. To give you an idea, Bihar, UP and Assam faced some of the worst floods in decades this year. And still ended up with deficit rainfall.

Given the kind of rains we have been facing this year, and the likelihood of cyclones hitting the east coast like last year, there is still hope for Kaveri getting some rains. But it might not be enough. And with every passing year it might set up a pattern of having to depend on cyclonic storms rather than the Monsoons. A river fed more from North East than South West monsoons. It does not help that more and more forests are making way for coffee plantations in Kodagu and the land-use patterns in the Western Ghats are changing rapidly. Given the way we are using the land around rivers, unchecked sand mining, and rampant deforestation in the Ghats, we are going to be seeing more, not less river water disputes. It isn’t that much of an anomaly that we saw a Bandh for the Mahadayi river and then another for Kaveri within a week. (Of course, there are other issues with Mahadayi, like massive mismanagement of Malaprabha by Karnataka and eyeing other resources to make up for that).

In the midst of changing rainfall patterns, there is also the issue of agriculture becoming more and more a gamble. Even though average income has increased over time, it has been balanced by an average increase in expenses (some heedless, some necessary) that has continued to put farmers in debt spirals. We are already seeing farming communities asking for inclusion into OBCs to get Government jobs and other perks. Even though it is tempting to see this as a social phenomenon it has a lot of roots in climate change and unpredictability of farming. Climate change is expected to continue to make things worse. Expect more protests on the streets of cities from farmers.

There is also the prediction that climate change would lead to more international conflicts in future. In fact, studies say that the drought of 5-6 years in Syria might have led to the initial uprising that triggered off the crisis. There are other analyses that debunk this theory, but for all you know people might have been going about their business as usual if it had rained properly. Like with most “micro events” it is extremely hard to anoint one cause. There will always be a myriad events that finally lead to the actual conflict, individual straws that add up to breaking the camel’s back. Better handling of the drought by an able administration, for instance, might not have led to the conflict.

There are some signs of hope though. A lot of the current problems and shortages are due to poor management. A lot of efficiency can thus be achieved with simple fixes like desilting existing dams, improving crop efficiency, reducing acreage under water-intensive crops, improving irrigation efficiency, moving to more drought-resistant varieties of crops(like SRI), rain water harvesting in cities to recharge local aquifers, plugging the massive 40-odd% of leakage of water that gets to Bangalore, reviving the lakes, recycling water. Yes, we could and should be ideally buckling down and getting more efficient in our usage of water. Just reviving and maintaining our lakes can help in so many ways including recharging aquifers.

None of these are silver bullets by themselves, it’s not like one solution will fix everything, and it would need constant and relentless plugging away at different inefficiencies. Bengaluru might still need water from Kaveri at the end of it, but the scale might be a lot more manageable and the stress might be a lot less in rainfall-deficient years.

The lack of hope stems from history and our track record in addressing basic issues. Solutions tend to be grandiose, like the Yettinahole project to bring water from farther places depriving local communities of their resource. Or promoting ideas like river-interlinking which have been shown to be infeasible and not likely to solve any shortages. We need tough decisions, the less “glamourous” ones which prioritise maintenance ahead of building new things at times, which go against “development” trends, like not allowing a water guzzling industrial plant near a stressed river, discouraging growing of water-intensive crops in regions where they have not been grown. And encouraging people to consume local produce and diets.

As long as we keep looking farther for our solutions the solutions might keep moving farther away. What direction will we choose? Business as usual or the “difficult” one? Will we even get to choose before it’s too late?

Bengaluru, it’s time to wake up and see the realities of water!
How could Bengaluru descend into violence?

“We sold our house to fund my training”

She is just 30, and still holds the Indian national record for the 200m freestyle swimming, 8 years after retiring. Nisha Millet swims through this deep diving Citizen Matters interview.

Conversations on groundwater recharging and rainwater harvesting tend to assume a knowledge of the meanings of several terms. Here’s a quick primer for Bangaloreans.