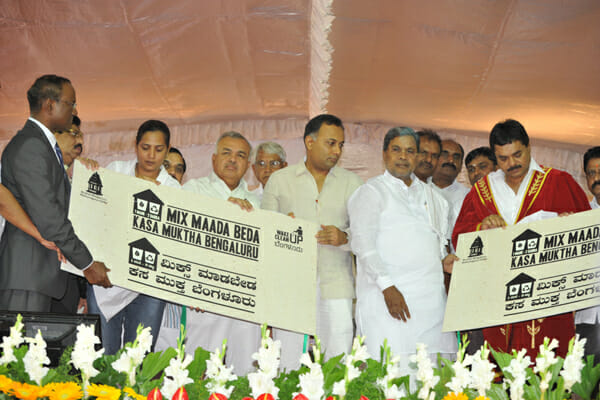 The need to get rid of the tag of ‘garbage city’ finally seems to have made its way into the policies of government. Kasa Muktha ward drive was launched at Freedom Park on Wednesday, 24 July 2013, with the garbage clearance machinery geared up with 250 trained, dedicated Pourakarmikas and garbage contractors willing to make the programme a hit. Chief Minister Siddaramaiah and BBMP Commissioner M Lakshminarayana kickstarted the drive.

Kasa Muktha is a programme launched at the ward level by BBMP, supported by Wake up Clean up. Kalpana Kar, Convener of Bangalore City Connect says, “BBMP is ready, because it is mandated by law to collect segregated waste.”

‘BBMP cannot do it alone’

Siddaramaiah said: “Along with the increase in the city’s population, there has been a rise in the quantity of waste generated in the city. The government is committed to help BBMP to sort  the problem of garbage.“ He added that citizens’ participation and cooperation is a must to achieve garbage-free city. They should cooperate and segregate the waste generated at homes., which will help the city to get back its original tag ‘Garden city.’ “Awareness is the key for the success of this programme,” he added.

The pilot in 22 wards

Along with door-to-door awareness campaigns for public, training programmes were held for 250 Pourakarmikas of the 22 wards at IPP and Town hall for three days, in the month of June, 2013.

“They gave demonstrations and mock presentations that focussed on the ideas that were taught to them. Awareness on the need and importance of segregation of waste, and importance of taking the segregated waste to the last receiver was communicated to these Pourakarmikas,” said Kalpana Kar, Convener of Bangalore City Connect.

Yelahanka
The programme will start officially in these wards within a week form now.

Kalpana points out at the three components of Kasa Muktha that differentiate it from the past campaigns: A third party audit, legal obligation of BBMP and commitment by contractors.

Auditing has two components, she said. “On one axis we have monitoring of performance on the weekly basis. On the other hand, softwares will record real time data of the amount of waste generated.”

“The figures recorded will provide real data and create visibility of the problems, It won’t be done under the carpet, unnoticed or based on mere estimates,” Kalpana Kar. It will answer questions like: How much waste is generated by a ward, how much was sent to hospital or to KCDC etc.

Ramakanth, a committee member of the Solid Waste Management Round Table, explains: “As of now, it is not decided whether the records will be made public or not, but there is no harm in making it public.”

Practitioners from across the city, Residents Welfare Associations and other interested citizens specifically from the 22 wards will be assigned the job of monitoring and keeping records.

Citizen volunteers will be assigned as ward mentors, along with BBMP officials. Waste wardens will keep an eye on the ward level activities to ensure the segregation at source and transportation with care.

Citizens will be fined Rs.100 for not segregating the garbage and for littering. Repetitive violation of the segregation will lead to higher fine.

“It is yet to become to an Act. Urban Development Secretary, Srinivas has confirmed that the bill has been proposed in the assembly, which will become an act during this session,” said Ramakanth.

Another idea that Kasa Muktha will strive to achieve is NGOG (No Garbage on Ground) system. “While transferring garbage from small to large vehicle we will not let the waste touch the ground, so there will be no black spots on the ground,” said, Kalpana.

Wake Up Clean Up Bengaluru (WUCU) was initially conceptualized as an expo, by the BBMP in association with Federation of Karnataka Chambers of Commerce and Industry (India) FKCCI and Bangalore City Connect Foundation (BCCF), which was held between 3rd February and 10th February 2013.

WUCU believes that ‘Segregating at Source’ is the key catalyst in bringing about a change in how the city manages its waste. It also aims to assist the BBMP and its partners in various activities and efforts by being a platform that will bring together the city.

One home, two dustbins – this is the philosophy Wake Up Clean Up has formulated for Kasa Mukta to bring a systematic change at both the ends of garbage problem: Citizens and contractors.

Wake Up Clean UP has partnered with city’s various organisations such as Bruhat Bengaluru Mananagara Palike (BBMP), Bangalore City Connect, FKCCI (Federation of Karnataka Chambers of Commerce and Industry), SWMRT (Solid Waste Management Round Table) and other representatives of stakeholders who are interested in a garbage-free city.

Residents of the 22 wards, where the pilot project is being launched will be motivated to follow the philosophy – 1 mane, 2 Dabba, Mix Maada Beda. Waste is to be divided into four sections: wet waste, bio-medical waste, sanitary waste and dry waste.

Wet waste will be taken to the concerned composting units. Waste collected from nine wards will be sent to KCDC. Melhem in Yelahanka  will collect waste from two wards and waste from 11 wards will be sent to Organic Waste India Pvt Ltd., a composting company. The dry waste will find its way to  BBMP’s dry waste collection centers in the respective wards.

Ramakanth said that the contractors, residents’ welfare associations and the Health Inspector can together decide when the dry waste is to be collected – once a week or twice.

The bio-medical waste and sanitary waste, such as medicines, syringes, napkins, cottons etc. will be collected separately from the households for the first time, remarked Kalpana.

Various hospitals in these wards will become collection centers, from here the sanitary waste will be taken for incineration. “Doctor Fana and Bala have offered us their existing facility for collection of the waste. Maridi and SEMB Ramky will process the bio-medical waste free of cost for two months during this course of pilot project. Later it will be tendered,” says, Kalpana Kar.

This waste will also be monitored and recorded which will give an idea to estimate how much Bio-medical and sanitary waste is generated in a ward. “Today there are no estimates, on what basis can we tender, what is the estimate, what is the quantity. So these 22 wards will give us number to tender sanitary and bio-medical waste,“ she says.

Bio-medical waste is expected to be wrapped in paper bag (One can use newspaper to wrap it too) and mark it with red ink, it will be collected daily or twice a week, “Again that depends on the residents. All that we are concerned is that the waste is taken in a segregated form,” Said Ramakanth. 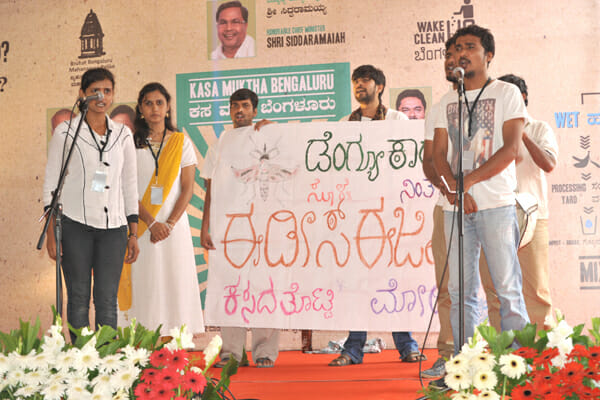 ‘No more Mavallipura or Mandur’

Mayor D Venkatesh Murthy looks forward for technologies to process garbage and convert it into biogas, biomethane, crude oil and manure. He says, “If citizens support us we will be able to extend the programme to all 198 wards in the next six months.”

He also added that he doesn’t want Mandur or Mavallipura episodes to happen again in future.

A short skit, “Mix Maada Beda,” was presented, with the famous duo Gandhigiri characters, Munna Bhai and Circuit, that not only entertained but also explained the audience the need and importance of segregation of waste at source.

The event was concluded with a pledge read by Minister of Food and Civil Supplies, Dinesh Gundu Rao, that promised to keep city clean just like the way we keep our homes clean.

Will it be successful?

“Let’s not be sceptical, let us give ourselves this chance. Let us think whatever has happened has not happened. Let  us change the perception. The pressure that we are putting on BBMP is enormous. It is much visible from today’s event,” said Kalpana, referring to the Kasa Muktha launch programme at Freedom Park, which was attended by more than 3500 people.

UID enrollments kicked off in Bengaluru in the last week of June. Where can you get enrolled?

Colourful kites dotted the blue skies of the city on Republic day. Over ten thousand people participated in the annual kites festival.

Bengaluru, the city of contrasts

Dev Raj and Mahesh came to Bengaluru to make a living. While one is happy the other is returning, dejected.