Just two months away to welcome a New Year, Kannada Wikipedians celebrated the completion of 10 years of journey towards building a free encyclopedia for Kannada. Wikipedians from different part of the state gathered today at H Narasimhaiah Hall, National College, Basavanagudi to witness the event.

The stage was adorned by the father of the modern Kannada dictionary, Nadoja Prof G Venkatasubbaiah, the chief guest, along with T R Anantharamu, Senior Scientist (retd), Geological Survey of India, Abhaya Simha, National Award fame Cinema Director and U B Pavanaja from A2K (Access To Knowledge.) 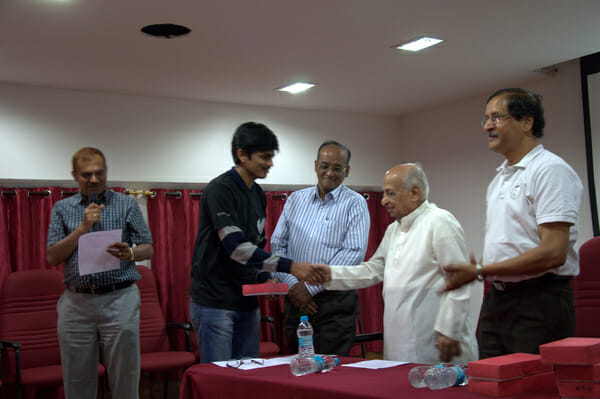 Wikipedia has been the key source of knowledge for a kid to complete its assignments to a research activity for a scientist. It has been one of world’s 5th topmost accessed website. Various languages across the world made a way to emerge language-specific Wikipedias and Kannada has been one of them.

In the 10 years of its inception, Kannada Wikipedia has grown up to accumulate around 13000 articles and still a long way to go in terms of building a language which has around 2000 years of history. U B Pavanaja shared his opinions on importance of building Kannada Wikipedia along with his stands on upcoming areas for development. He said that informative articles are less at the moment and it should be the focus going forward.

Nadoja Prof G Venkatasubbaiah addressed the audience wishing Wikipedians and insisting youth to participate more with Kannada Wikipedia. He felt that completing 10 years isn’t sufficient but the growth should continue by participating more.

T R Ananthramu said being a scientist, he understands the challenges in research activities to dig the accurate information for a particular topic. He thinks the need for domain experts to actively participate in Kannada Wikipedia to add the right content which will in turn help everyone to get correct information.

Abhay Simha, Cinema Director, said that having his father Ashoka Vardhana who runs a book publication and a book stall and grandfather, GT Narayan Rao who was a science writer, he knows the need for timely updation with respect to reprinting science books. Realising the benefits of Creative Commons introduced by Omshivaprakash H L, SIG Chair, Kannada Wikipedia, Abhay has released the science-related books written by his Grandfather under CC License. He wished that all these books get added to Wikipedia and the knowledge is shared with everyone.

The celebration continued with demonstration on editing Wikipedia by Omshivapraksh followed by a session on Creative Commons licenses by Kiran Ravi Kumar, who is an engineering student from Mysore. The event was ended by an Edit-o-thon for the Wikipedians to add new articles.

On marking the 10th year completion, the active users of Kannada Wikipedia who have been editing and adding articles from years were given mementos as appreciation to acknowledge their contribution. Harish M G, Tejas Jain, Pramod R and a few of them recieved the token of appreciation during the event. A few of the Wikipedians shared their experience briefing difficulties that a user faces at the beginning and how to overcome all the barriers to involve in editing Wikipedia.

It was a fruitful event that made the participants understand and realise the need for exponential growth of Kannada Wikipedia and moving forward to make a rich and free Encyclopedia for the Kannada community.

Learning Kannada: It’s not as tough as you think!
Science and technology writing in Kannada
Prof G Venkatasubbiah says it’s wrong to impose Kannada
Can you survive Bengaluru without Kannada?

About Pavithra Hanchagaiah 1 Article
The author has not yet added any personal or biographical info to her or his author profile.

Cybercrimes rocketing in Bengaluru, police straining to catch up

Last year, 10,131 cybercrimes were registered in Bengaluru but zero chargesheets were filed. The city police is now trying to catch up, with new dedicated police stations and personnel

What does a demolished area look like? What’s happening in the area where properties were demolished to create a stormwater drain? Kate Clark catches it all on camera.