In an age when the colloquial phrase “there’s an app for that” is true of almost everything imaginable—dating, determining whether your watermelon is ripe, predicting bad hair days—it makes sense Bengalureans would use apps to teach and learn Kannada.

As early as 2001, before the largest cohort of migrants took up residence, Kannada, the official language of Karnataka, was the first-language of only 40 percent of Bengaluru’s residents (this statistic doesn’t include those who speak Kannada as a second or third language)

Since then, the number of English-medium schools grew, Hindi became a more common choice of second-language, English became the native tongue for some of the youngest generation, tech-migrants became the majority, and many could be heard uttering the phrase “Kannada gottilla,” or “I don’t know Kannada.”

Tired of that particular utterance, locals are realising the best way to teach techies might just be through, well, tech.

Enter Kannada Baruthe (I know Kannada) and Kannada Gottilla, two platforms employing technology to promote the teaching of Kannada. The former provides Kannada lessons through its own app; the latter uses WhatsApp, a cross-platform messaging app, to send its students daily lessons. Anyone seeking to learn Kannada can also turn to Twitter, Skype, YouTube, and of course, a school.

“I don’t think people would actually travel to learn Kannada because their schedules are hectic and their weekends are booked,” Founder of Kannada Gottilla Anup Maiya said. “WhatsApp makes their life easier. They can spend just fifteen minutes a day [learning] Kannada. Fifteen minutes is nothing. Anyone can spend fifteen minutes.”

You can review lessons while stuck in Bengaluru traffic, Maiya suggested.

Kannada Gottilla started in 2014 with just a small WhatsApp group of 10 migrants seeking to learn Kannada. Now they have 2,800 students who pay Rs 200 per month for bite-sized lessons delivered straight to their smart phones. They have 13 trained teachers who create the lessons and assist students via WhatsApp when necessary and host one free, in-person lesson the first Sunday of every month on MG Road. 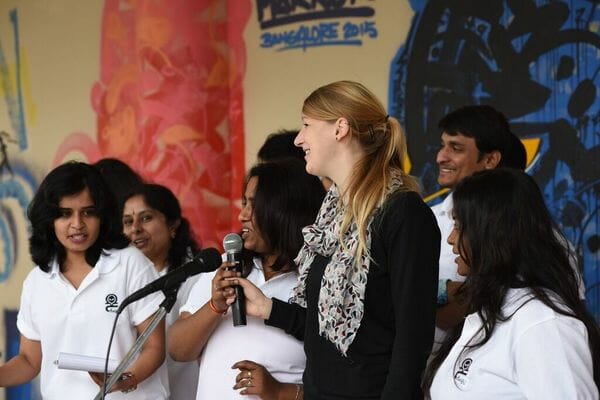 Exchange of views and lessons, at Kannada Gottilla meet up, Pic: Rakesh Maiya

Maiya worked in Pune for years and knows first-hand the difficulties of being a migrant, but he learned the local language of Marathi while living there and now speaks eight languages.

“The idea is not to force any language [on] anyone; the idea is to bring this linguistic equality,” Maiya said. “I don’t think migration is a problem, I think awareness is a problem. We have to create awareness for migrants and non-migrants. Migrants won’t know how things work here, so we have to teach them. We can’t blame them for coming here to work… You go there, you learn, you try to be a Roman in Rome, a Kannadiga in Karnataka.”

From not knowing the language to Kannada Baruthe

Kannada Baruthe is only about a year old, but already has 22,000 users per month, 85 percent of which are from India.

Originally hailing from Mysore, Kannada Baruthe’s Web Developer Vikram Cannanure lived in Bengaluru for 15 years before moving to the U.S. He said the first step toward interacting with and contributing to a community is learning their native tongue. He referenced a time he stayed in Florida and used Google Translate to communicate with a community of Spanish-speakers: “this connection happens because of language.” 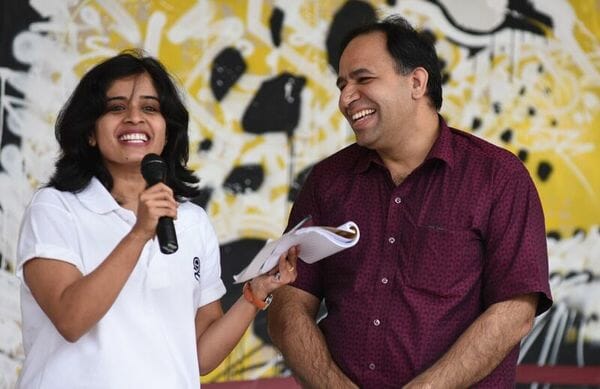 A snapshot of one of a Kannada Gottilla meet up. Pic: Rakesh Maiya

In addition to decreasing the ratio of Kannada speakers to other languages, the 47 percent increase in population density in Bengaluru from 2001 to 2011 led to an increase in the number of language “bubbles,” according to Cannanure.

Breaking the bubble through app

“If you are staying in a community that is only speaking English or Hindi you don’t find the need to speak Kannada,” he said. “So people tend to stay close to their offices and they form a small community with people who speak the same language.. they don’t speak the laguage in that bubble.”

Despite being raised in Bengaluru, Cannanure said he wouldn’t know Kannada had his parents not taught him. His English education, like many, prioritised Hindi as a second-language over Kannada.

Last year, after criticism of the lack of Kannada education opportunities, the language became a mandatory subject in all Karnataka schools following the state’s syllabus. Mandatory curriculum, while frustrating for those unfamiliar with Kannada, is one way to augment the Kannada-speaking population, kids and migrants learning through WhatsApp is another.

“Bangalore is not just rich people who can speak English,” Cannanure said. “The city is well-educated, but there are people… who are not lucky enough to go to such schools… They don’t have the capability to learn English as you do to learn Kannada and if you just make a small effort it will make your life better and their life better.”

Voting on May 12th? This guide is for you

Your vote gives you the power to hold elected representatives accountable. So, be an informed voter. Here’s everything you may want to know before you head for the polling booth this Saturday.

Garbage dumps are a common sight in Bangalore. If it is not piled up in empty sites or landfills, it is seen in mounds at street corners. Rented cutlery is now being used as an effective green alternative to single-use disposables.