Byrathi Basavaraj is a first-term MLA from K R Puram. He has managed to stay in news for alleged land mafia and for his supporters thrashing a mother and her son.

Like most of the areas that were added when the Greater Bangalore area was formed, K R Puram area reels with very basic problems – lack of underground drains, water scarcity, garbage and traffic congestion which fall under the jurisdiction of the municipal councillors – a majority of who are from the Congress party. For a man who represents a constituency that is famous for its IT parks, Basavaraj has very little social media presence.

His choice as the MLA candidate for the K R Puram constituency in the previous election saw senior congress leader A Krishnappa quit the party and join the JD(S). Krishnappa was expected to be the candidate for K R Puram and had the backing of KPCC chief Parameshwarappa, but Basavaraj is reportedly a confidant of the Chief Minister which won him the ticket . Basavaraj was in the news in 2014 for assaulting a traffic constable because he was stuck in traffic for a while. Basavaraj has a agricultural and entrepreneurial background.

Basavaraj in the Assembly

B.A. Basavaraj was a member of Committee on Public Undertaking.

BA Basavaraj in the news

October 19, 2015:  In 2014, the K R Puram MLA wrote a letter to the Urban Development Department seeking the reinstatement of K N Devaraj as the head of the civic body’s Mahadevapura zone. But the Commissioner refused on the pretext of wanting either an IAS or KAS officer for top posts in the BBMP.

January 7, 2016: When BBMP officials found mounds of garbage suspiciously strewed on one side of K R Puram Bridge, the MLA took an active interest. He tried to study the source of this mischievous activity, perfectly timed according to the Swachch Bharath survey.

June 14, 2016: BJP leader N R Ramesh alleged that the Rs 123.06 crores assigned to the Karnataka Rural Infrastructure Development Limited had been misused. He said that KRIDL had outsourced the work to people associated with the MLA Byrathi Basavaraj.

July 11, 2016:  Receipts of payment show that payment was made towards improvement projects on roads in Akshayanagar 1st and 2nd blocks. However, the roads are not asphalted, which reflects poorly on the MLA B Basavaraj, who denied the allegations of approving false work.

April 20, 2017:  He was present during the CM laying of the foundation stone to commemorate the beginning of the Cauvery Stage V plan in his constituency.

June 28, 2014:  Traffic constable, Bheemappa Lamani Naik, accused the MLA of abusing and assaulting him during a traffic jam on Banaswadi main road.

July 13, 2016: The Karnataka Lokayukta registered a complaint against Byrathi Basavaraj and five others for alleged dereliction of duty. The Rupees 842 crores allocated to the KRIDL has not been utilized for the purpose of improving infrastructure says the complaint.

March 6, 2017:  Senior BJP leaders, D V Sadananda Gowda, MP Anant Kumar and State President Prahlad Joshi, protested outside the KR Puram police station, as they believed that the CM’s close aide, MLA Basavaraj was responsible for the murder of N Srinivas.  He was the husband of Devasandra ward corporator.

March 19, 2017:  A relative of the MLA  was caught by the police for stealing five kgs of gold jewellery at the venue of the daughter’s wedding.

August 28, 2017: Former BJP MLA Nandiesha Reddy and the sitting Congress MLA were fighting for the credit of introducing the new RTO in Ramamurthy nagar.

December 18, 2017:  Former CM Sadananda Gowda accused the MLA of increasing the number of murders in the city.

How did Basavaraj spend his MLA LAD fund?

Every year, an MLA is given Rs 2 crore to spend on developmental works in his constituency. He should allocate the funds for areas such as government, community, education and health infrastructure

In five years, according to the available data, B A Basavaraj has spent Rs 9.79 crore for the development of K R Puram.

The maximum amount of Rs 2.62 crore has been spent on road development. The range of expenses for this activity has varied. One entry shows an expense of Rs 2 lakh for cement concrete development at Ward 51. Another development activity, showing “Improvement and Asphalting to Vinayaka Layout” has been split into two entries, specifying Phases 1 and 2. For each, the allocation was about Rs 40 lakh. They both added up to Rs 81 lakh.

The educational expenses are interesting. Two construction facilities seemed to have got disproportionate allocations of Rs 50 lakh each. One entry for that amount showed an “auditorium / compound wall and toilet construction and other emergency works”, while another entry explained the building of a “Compound wall, RO Drinking water facility and Improvement of playground”. Both the items did not seem to justify the expense.

Various other entries also attract attention. There are two temple-related items that add up to Rs 36.29 lakh. One description of “Reservation Works for Five Rooms, Steel Window Doors Matting and Painting Work” is pegged at Rs 20 lakh, even as “Infrastructure and gym equipment for multipurpose training centre” shows Rs 25 lakh. Construction of “toilets for the drinking water works and the convenience of students” is listed as an entry of Rs 50 lakh. But none of these entries are really explained clearly to justify the expense.

There are mysterious items the purpose of which remains unclear. For example, public interest work worth 30 lakhs have been undertaken.

The category break up of expenses for all the five years looks like this: 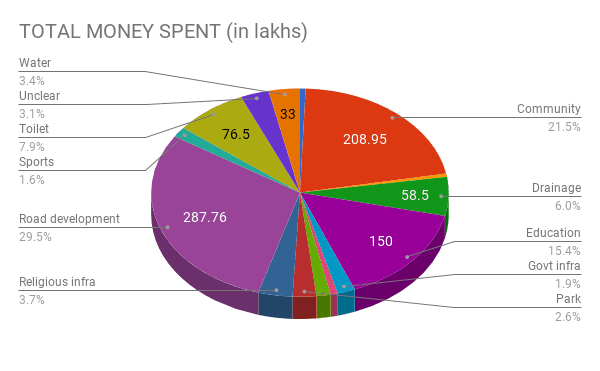 Various trade unions have called for a bandh against the Road Safety and Transport bill to be tabled by the government in the parliament. Why are they objecting to the bill? Here is some explanation.

If you are one among the lakhs of voters of Padmanabha Nagar, this is what you need to know! Background information: Understand the role of the MLA Learn all you can about the candidates: see