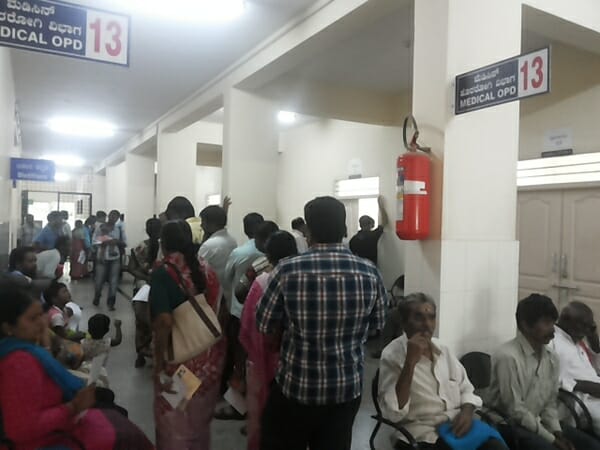 What could be the number of people who suffered from dengue in Bengaluru? Out of 443 people who saw a quick survey conducted by Citizen Matters, 171 people replied positively about dengue cases. As many as 20 of them said they themselves got dengue since January 2015. This makes for a percentage of 4.5 cases of dengue on the readership of the survey.

If 4.5% of the population in Bengaluru suffered dengue, what could be the numbers? How many might have died?

To understand the enormity of the issue, Citizen Matters hosted the online survey. Readers were asked to share information on whether they or a close family member had been affected by dengue. And the results we got corroborate the story of under-reporting of dengue cases.

One of our readers Joseph Dass, who had filled the form, said that his acquaintance Valeria, a resident of OMBR Layout near Banaswadi, died of dengue 10 days ago. She was admitted to Koshy’s Hospital when fever was high and she could not be saved, he said.

When Citizen Matters contacted Bannerghatta Road branch of Apollo hospital, we were told that over 1,000 confirmed dengue cases were reported in that hospital alone since January!

“We had at least 4,000 suspected dengue cases this year of which the disease was confirmed in over 1,000 cases. Of this at least 1/3rd of them were critical and were admitted to the hospital. We have been submitting dengue reports to the department regularly,” a doctor from the hospital adds.

Karnataka Health and Family Welfare Department’s website puts the number of dengue cases reported in Bengaluru city limits at 1,249, on September 29th 2015. This is the total number of confirmed dengue cases reported since January this year. According to this data, of the nine dengue deaths in Karnataka, none are from BBMP limits.

Though BBMP’s data says there are no deaths in Bengaluru, sources from Apollo hospital say there were four dengue deaths so far in that hospital alone. Then how many cases would have been reported from all private hospitals in Bengaluru? We don’t know, but it is clear that government data isn’t reflecting the reality. Where exactly is the problem?

Treatment of dengue is free in government hospitals. In private hospitals the cost varies depending on the kind of treatment required.

This Indian Express news report mentions how a landmark 2014 study finds the real incidence could be 282 times the reported number per year. The study was conducted by the government’s own National Institute of Health and Family Welfare (NIHFW), New Delhi and found that India could have had over 57 lakh clinically diagnosed dengue cases during 2006-12.

In such a situation, why does the disparity in numbers continue to prevail? “That could be because the Department does not take our reports into consideration if blood samples are not tested by government specified laboratories,” says a doctor from a private hospital who does not want to be named.

Karnataka Health Minister U T Khader says there is no issue and denies any sort of underreporting.

“We have clearly told the government and private hospitals to follow the guidelines in conducting dengue tests and have asked them to submit us case reports on a regular basis. We have also directed them to follow uniformity in treatment. It is easy to make allegations about underreporting. Give us the evidence and we will take action,” he told Citizen Matters.

Dengue reporting – why is it not working?

This brings us to the core issue of confirmation tests for dengue. According to a government circular issued in 2010, the government and private hospitals can confirm dengue (DHF/DSS) through IgM Capture Elisa test. The circular says that rapid tests are not reliable in view of variable sensitivity and specificity.

In case of IgM Elisa, private institutions should send blood samples to referral laboratories if the test result is within 5 % positive or negative range for dengue, or if the test confirms dengue hemorrhagic fever (DHF) or dengue shock syndrome (DSS), which are serious cases of dengue. Referral laboratories in Bengaluru are National Institute of Virology field station at Victoria Hospital, Public Health Institute and NIMHANS.

“We had at least 4,000 suspected dengue cases this year of which the disease was confirmed in over 1,000 cases. Of this at least 1/3rd of them were critical and were admitted” – Apollo Hospital

Further, the circular says that the private hospitals can confirm a case of death due to dengue, only after referral laboratories confirm the blood samples.

But, this entire procedure is tiresome, according to hospitals. A doctor from a private hospital says that in their hospital they suggest Rapid Card test or NS1 Elisa test for patients who approach them within 4-5 days of having the disease symptoms. “If we are quite sure about the clinical sign and are in need of early detection, we advise Rapid Card test because here the test result is available in half an hour, whereas NS1 Elisa test result takes a day’s time. If the Rapid Card Test result is negative, we normally suggest the patient to undergo NS1 Elisa test for double verification,” he informs.

For patients who come to the doctors after five to seven days of onset of disease, the doctors suggest IgM Elisa test. “Rapid Card test is not reliable enough, but we believe that NS1 and IgM Elisa tests are quite accurate. Hence, we do not send blood samples to referral laboratories,” a doctor from a private hospital says.

When this angle was pointed out to the Health Minister, he warned of issuing notices to those hospitals that fail to submit dengue case reports.

“No underreporting, Give us evidence and we will take action” – UT Khader, Health Minister.

BBMP’s Chief Health Officer Dr Vatsala confirms that at present they consider only those cases confirmed by NIV. “Time and again we have been directing the private hospitals to send blood samples to NIV, but they do not do so. Majority of them conduct rapid diagnostic test where the accuracy level is low. There is no delay in getting test result from NIV. It can be obtained in 3-4 days,” she says.

The answer is, yes. Sources say that be it a private hospital or government hospital, practically patients and doctors cannot wait for 4-5 days for the arrival of test result from National Institute of Virology and then start the treatment, in case of dengue. This is because generally patients come to the hospitals after waiting for 4-5 days for the fever to go down. Waiting for NIV test report can be fatal for the patient.

Dr T Durganna, Medical Superintendent at Victoria Hospital, confirms this. He says that the doctors in Victoria hospital do not wait for the NIV report to begin the treatment. They start symptomatic treatment for the patients. However, they will initiate blood transfusion only after obtaining report from NIV.

“The issue could be fixed if the government identifies and accredits private laboratories and hospitals” – Dr Arvind Kasturi, St Johns Hospital.

Sources from K C General hospital, Malleshwaram, say that it takes seven days for NIV to send the reports. When there are holidays in between, the delay is more as it is a government entity. However, doctors here don’t wait for the report. They start the treatment as required, based on various in house tests including platelet count tests.

For this reason, the number of dengue cases could be much more than what is portrayed by the Department, for private doctors prefer to treat the disease first, than reporting it, as reporting it doesn’t serve any other purpose than figuring out the accurate number of affected patients.

In case of private hospitals, NS1 Elisa or IgM Elisa and platelet count tests are conducted in the labs of the hospitals and treatment is given accordingly. Same test is conducted in NIV too but the result is usually delayed.

What does the official data suggest?

Dengue cases in BBMP limits (as on September 30th)

The data suggests that half of the confirmed cases from across BBMP limits were from K C General Hospital alone. This is not likely to be the truth, as dengue has been seen across Bengaluru, with all hospitals treating it.

What’s the solution for this problem? The issue could be fixed if the government identifies and accredits private laboratories and hospitals that are capable of making efficient diagnosis on their own, opines Dr Arvind Kasthuri, Head of the Community Medicines Department at St John’s Hospital.

He strongly believes that several private hospitals and laboratories in the city are capable of performing diagnosis on their own at par with referral labs. The government should recognise such labs and take into account the dengue cases reported by them. This will also help private medical practitioners in treating patients. They can refer their patients to undergo blood test in accredited laboratories instead of sending them to hospitals.

“At present, most of the private hospitals do not send blood samples to referral labs to avoid the delay in procedure. Naturally, priority of hospitals is to cure patients, not to contribute to the literature of the Health Department. The only way forward to ensure actual dengue cases to reflect in the Department’s statistics, is to accredit private labs,” Dr Kasthuri says.

However Health Minister Khader disagrees with the need for additional accredited referral labs. “The existing laboratories are sufficient. There is no need for more labs,” he said.

Some questions on dengue status

— With inputs from Shree D N

Chikungunya and dengue: prevention and treatment
Was it dengue?
Should you panic if a dengue patient needs platelets?
Dengue numbers up, as rain continues to lash Bangalore
Fever? Make sure it’s not dengue!
Tips to prevent dengue and chikungunya in flats

With some simple changes and planning, transport facilities in Yeshwanthpur can improve, making the area even more attractive for the growing numbers buying new properties.

Thanks to the many PSUs in the city, Bangalore has plenty of self-sufficient townships that house employees in their verdant campuses.