Residents affected by the realignment of Metro track near Jayadeva Hospital claim to be harassed by the land acquisition and survey officers, even before the Phase-II is officially finalised.

One of the residents, Anil Kumar (45), Freelance Consultant in Strategy and Project Management, has been living opposite to Jayadeva since 1986 with his mother who is affected by Parkinson’s disease.

He says, “Two officers named Venkat Raman and Gopal Swamy, who claimed to be the survey supervisors from Bangalore Metro Rail Corporation Ltd. (BMRCL) visited us in order to verify and procure copies of property documents, Khata certificate and latest tax paid receipt.”

Residents question the need to carry out such surveys when no clear notification is passed by the government.

“These survey officers act like typical land acquisition officers,” says, B S Murthy who is fighting for his sister’s property that will be affected by the new alignment.

He claims that A Gopalswamy, Tahsildar of BMRCL, threatened the residents by saying, “If you do not give land, we will call police and take it forcibly.” 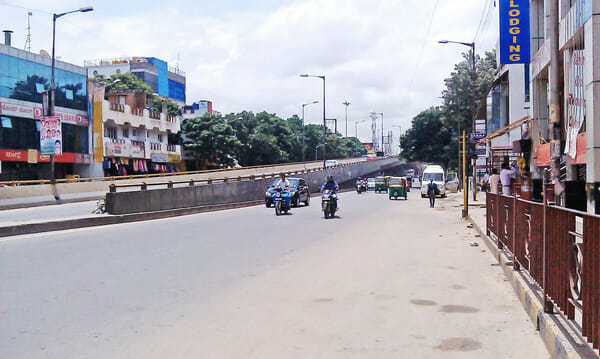 In defence, A Gopalswamy says: “I have not threatened any property owners or any residents living at Jayadeva. We were identifying the properties. The survey will be done only after notification is passed.”

“We asked them to show the property documents and Khata certificates which will help us fix the compensation. Rail India Technical & Economic Services Ltd. (RITES) is assigned with the task of preparing drawings of the project. Accordingly the property owner will identified and notified,” he adds.

One more survey by RITES?

Along with these survey officers, survey supervisors of RITES are carrying out preliminary survey and verifying documents of the property owners, for Phase-II land acquisition.

Ramesh K, an advocate, is also one of the residents to lose his property by the re-alignment. For the past three months, he has been struggling along with others, to save his property from being acquired. He is also the coordinator of the Victims’ affected by Metro and Citizen’s Futuristic Bangalore.

He says, “Sivasailam appointed RITES, before termination of his service, to measure the amount of land and identify the property to be acquired for the new Jayadeva alignment. RITES have already procured property names and Khata from BBMP, now they are measuring the exact land and will notify BMRCL accordingly to initiate land acquisition.”

When a clarification was sought from RITES, survey supervisor S S Shah said, “Before executing any project we need to assess the line again. We are not redesigning the project. As the DPR is formulated years ago, one cannot use the same plan. It requires modification as the city infrastructure keeps changing.”

Mails and queries to BMRCL by Citizen Matters on the survey issue are yet to receive a reply.

The previous plan of BMRCL was formulated by Delhi Metro Rail Corporation Ltd. Since then there have been many changes in the alignment due to public protest. The new plans are later re-designed by RITES.

The proposal for Phase-II after the proposed re-alignment is yet to receive final approval from the Central Government. The cabinet has asked for explanation over the increase in the cost of project..

Residents affected by the new alignment have joined hands to question the decision of the re-alignment and suggest changes to new Managing Director of BMRCL, Pradeep Singh Kharola.The same letter has also been forwarded to Chief Minister and Mayor.

Metro flouts its own rules?

According to norms, every station should maintain a distance of 1 km from each other.

However, due to realignment, the station is shifted and the rules twisted. After Jayadeva Interchange, the BTM layout station is proposed to be located at a distance of 936 metres.

Ramesh says, “The Metro station was proposed on a Petrol Pump in BTM layout. But due to political nexus, it is now proposed to be built 64 metres before the Pump for which 14 additional properties will be raised.”

Also the new alignment would decrease the distance between J P Nagar IV Phase station to Jayadeva Hospital Station from 1.059 Km to 0.695 Km.

This was highlighted in the 25th High Power Committee meeting held on 7th March 2013, but the committee overlooked the rule and the present new alignment was accepted.

The letter demands clarification from Kharola on the realignment, as the new alignment will cause destruction of more commercial and residential building as against the previous line, and more pain to the people.

The letter highlights three essential problems in the re-alignment.

The RV Road- Bommasandra line when enters the Jayadeva lane it takes a sharp turn to left. “The new alignment has drafted the turn at a height of 23 feet thus giving a roller coaster ride to the people,” says Ramesh.

No for Metro – for hospital’s sake, or a hotel?

Angry residents questioned the decision taken by the High Power Committee who failed to check whether Metro really had any effect over the hospital and “blindly accepted Jayadeva’s story.”

Ramesh pointed at Jayadeva’s inactiveness over two years since the Metro’s Phase-II DPR was formed in 2011. “It was only when the Metro decided to lay tracks that Dr. Manjunath remembered the ill-effects of Metro on the cardiac hospital,” criticised Ramesh.

He referred to the news reports aired on News 9, that Jayadeva was unwilling to give up its property to Metro as there was a proposed plan to build a three star hotel on its 3-acre vacant land. He added: “Manjunath himself accepted on TV about this. But now the proposed hotel is on hold.”

On behalf of the residents of Jaya Nagar, where the Metro runs elevated, the letter has requested BMRCL to take the Metro underground.

Residents are aware of the high cost of involved in taking Metro underground. “If they can spend money on land acquisition, why don’t they spend the same money for underground project? This will reduce the acquisition of properties and the project will progress unhindered,” say the residents.

S S Shetty (74) resides at Silk Board Junction since 1992. Through his property the Silk Board line will pass towards Bommasandra. He says, “I don’t have any other place. At this age where will I re-locate and hunt for a new house?”

Shetty purchased his site from the BDA in 1985. Most of the houses in this area have only ground floor, with no pillars. Hence partial destruction of a property will lead to destruction of the entire house.

“We are not against Metro. We just don’t want to lose our land. If the Metro can run underground at Cantonment Railway, Pottery Town, Tannery road, then why not here?” asks Shetty.

Residents have also requested the BMRCL to not carry out any survey until the project is properly integrated with the corridor to avoid time and mental harassment to the residents.

Commuters and shop keepers are most worried, as the ongoing project does not seem to be seeing the light at the end of the tunnel.

It’s rainiest November in Bengaluru since 1916; more to come!

This November, the rain in Bengaluru broke all records. The wettest in over hundred years, you gotta wait a few more days to see the sun shine!

Through concerted action, residents made sure the pubs followed the rules. Police helped control the situation by being the watchdogs for the area. Result: new year parties had no noise!