As 2015 has drawn to an end, it would be worthwhile for the government to reflect and learn from the issues that the citizens raised their voices about this year. The tech-savvy residents of various regions of Bengaluru increasingly took to public protests this year to voice their discontent with the myriad infrastructure problems that beset their neighbourhoods. These problems are symptomatic of the underlying issues arising out of a myopic vision and a deficit (sometimes bordering on absence) of governance.

As long as the state government and the city’s administrators remain mired in a cycle of firefighting, band-aid fixes and peddling ‘white-elephant’ projects as grand solutions, the protests will only spread and improving the livability of India’s Silicon Valley will remain a distant dream.

Residents of Sarjapur and Bellandur, along the Outer Ring Road (ORR), staged a protest recently to highlight their infrastructural woes. A fortnight ago, in a protest with a clarion call to “Save Whitefield“, around 10,000 residents of Whitefield, a suburb that is host to most of the IT companies, got together to form a human chain that stretched for 10 kilometres. The tipping point that mobilised the otherwise docile professionals was school children being stuck in traffic for almost 3 hours on their way back home. 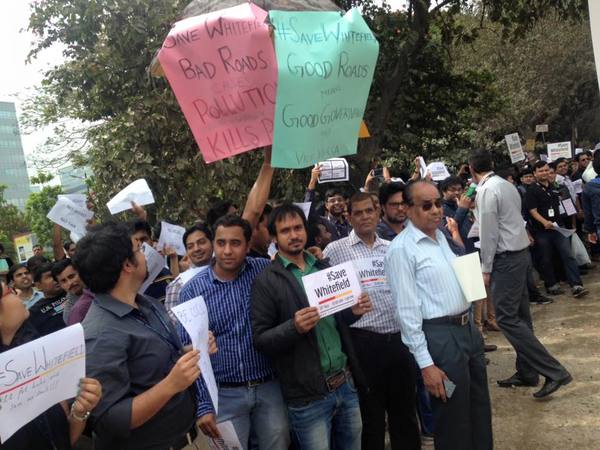 This followed similar other protests in Whitefield and HSR Layout in the past two months. Such vocal demonstrations by a section of the citizens bring to fore the issues plaguing the city and accentuate the extent of discomfort that people and businesses endure on a daily basis. But the response it garnered from the government is revealing. It ranged from half-hearted midnight operations to asphalt roads, hours before the protest, blaming different agencies for dug-up roads to mooting the idea of tunnel ring roads.

Facilities that don’t match the growth

As pointed out earlier (by Pavan and Karthik), Bengaluru has not only seen a rapid growth from about 200 sqkm to around 709.5 sqkm, but a failure of infrastructure and governance to catch up with such growth. The recently released BBMP restructuring report prepared by a 3-member expert committee, points out that the existing 198 wards in the BBMP area demarcated in 2007 were based on the 2001 census.

From 2001-11, the city expanded by 44.6 per cent, one of the highest in its comparable class in the world. During the same period, while the inner core areas grew by about 18 per cent, the outer regions expanded by more than 100 per cent. The report adds that 43 wards have a population more than 50,000 (based on 2011 Census) and the largest ward, Horamavu, is well over 1.1 lakhs at the moment. Compare this to the ward size recommended to be fixed ideally between 20,000 for the outer growth areas and 30,000 for the inner city areas.

No road planning in new areas

Coming to one of the main triggers of the protests – traffic. It is a norm in Whitefield and ORR regions for people to waste many productive hours negotiating traffic pileups. While narrow roads, potholes, lack of pavements, etc. contribute to the traffic jams, the primary issue, especially in Whitefield, is that the suburb has only two access points and no alternate routes. This nightmare scenario could have been averted had the city administration planned a more robust road network with multi-modal public transport options like commuter rail and bus rapid transit systems when it was wooing IT companies to set up shop. The problems extend to haphazard announcements of one-ways and arbitrary banning of U-turns leading to circuitous routes.

Consider the other perennial problem of lethal potholes in Bengaluru. There are two parts to this problem—one, why do potholes appear in the first place and two, why are they not fixed? The first problem arises due to poor quality control in road-building practices and the utter lack of coordination between various civic departments such as the BWSSB, BESCOM, BSNL and BBMP that results in repeated mutilation of newly laid roads.

The re-emergence of potholes can be blamed on patchwork repairs carried out with substandard materials. It is quintessentially the government’s way of trying to placate its frustrated citizens after each round of rains. To make matters worse, the administrators repeatedly slip on their self-declared deadlines of making the city pothole free. In short, there is neither sound planning nor a well-managed process.

Another classic case of the administration caught napping is the garbage issue that has dogged the erstwhile ‘garden city’ for the past many years. Since 2012, the protests of villagers against landfills in their backyards, has moved from Mavallipura to Mandur to most recently, Bingipura. The response of the various governments, including spending 329 crores in the year 2013-14, has hardly changed the situation on the ground. The policy-making space has been ceded so much that the judiciary has continuously overstepped its mandate to propose tender rules for new contracts on waste management, to the latest 2-bin-1-bag ruling. The story follows a similar trajectory on the issue of degradation of lakes. Is it any surprise then that protests continue to arise at a frequent basis in Bengaluru?

The solutions to these myriad problems exist. Many civic organizations, activists and experts have lent their time, energy and ideas to fix these issues in Bengaluru over the years. The implementation of TenderSURE roads in the Central Business District has lit a beacon of hope. The 2015 BBMP Restructuring Committee’s report addresses most of the chronic problems and recommends a credible roadmap towards a more liveable Bengaluru for all its citizens. However, it is yet to gather momentum.

Dr. B.R. Ambedkar, in his famous speech during the Constituent Assembly debates said, “I feel, however good a Constitution may be, it is sure to turn out bad because those who are called to work it, happen to be a bad lot”. Similarly, all the good policies and governance mechanisms are doomed to fail, unless the intent and accountability of our policymakers is fixed.

About Nidhi Gupta 2 Articles
The author has not yet added any personal or biographical info to her or his author profile.

The Ugly Indian gives a brief of the other world that lies beneath Bangalore’s roads and footpaths.

Bengaluru this week   <!– –>   Here’s what happened in the city last week: Bengaluru is about to get a modern abattoir near Ramanagara. HC has dismissed a plea from residents

When you see someone doing something out of the ordinary, do you wonder what they are up to? Perhaps you should ask them… What they have to say could inspire you.