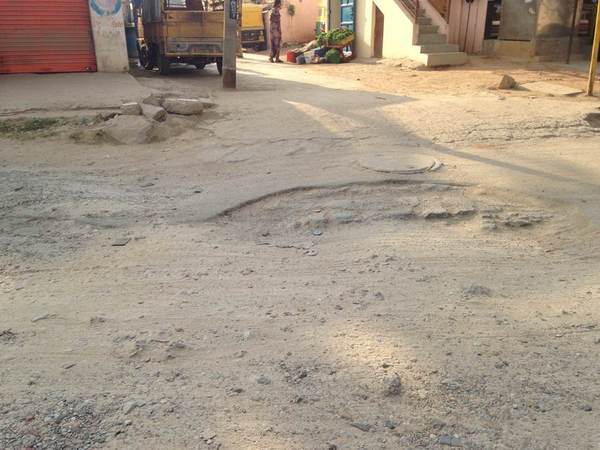 Imagine travelling on a road that has potholes as deep as 2 feet. Just thinking of it sends shivers down the spine.

This happens to be daily reality for 10,000+ people using the Kasavanhalli Main Road from Hindu Temple at the Kaikondrahalli Junction till Amrutha College.

What is surprising is that the local authorities are not doing anything about it. So far, no action or steps have been taken to resolve the issues that plague the commuters travelling on this high vehicle density road, which connects Sarjapur road to Hosur road.

The potholes are a real menace for the residents and commuters, and have led to a multiplicity of medical problems. Backaches, pregnancy complications as a result of the constant jerking, respiratory disorders due to heavy dust  – these are only some examples. Even ambulance services take a long time to reach, due to the bad road conditions.

Children too have started experiencing respiratory problems beacuse of the amount of dust. The future generation is certainly being subject to high risk. Additionally, the commuters are at a high risk of accidents whenever they drive, owing to the pathetic condition of this road.

This has obviously created a lot of unrest amongst the residents in this area, who have approached local authorities like the BBMP several times; but so one seems to be paying any attention.

It is almost as if the authorities are waiting for a casualty to happen, before they act on it.

It is time that the local authorities paid a visit and did the needful to improve the condition of the road.

Author’s note: Representatives from 12 RWAs in the area will be meeting the local corporator on May 9th at 10 am to discuss the condition of the road.

About Ankush Arora 1 Article
The author has not yet added any personal or biographical info to her or his author profile.

Accidents, are preventable just like any other health hazard. Road discipline is key to this.

No firm has bid for BDA’s tenders for skywalks on Outer Ring Road, through PPP. BDA wanted the firms to pay over Rs 99 Lakhs per skywalk for 20 years, in addition to building and maintaining it. Now what?

‘Cash for coverage’ comes to BBMP elections too

Corporator-aspirants are leaving no stone unturned, as they openly offer money to the media to be written about. Paid news goes local.