These are the realities of the Indian street that are often ignored by city planners and those who want a better city. Seemingly simple things that work overseas (like trash cans) don’t work well in India.

McDonald’s tried its best on Brigade Road, Bangalore – and installed some 30 large fibre-glass dustbins, costing about Rs 2,000 ($40) each, and branded with their Golden Arches logo. They lasted barely a few weeks. Some were vandalized, some caught fire from tossed cigarette butts, many were stolen, and soon none were left.

Many other well-meaning attempts to create street furniture or public facilities end up with the same fate. It is a public design challenge that city planners haven’t given enough time and attention to. X and V had some specific ideas on this subject drawing from their studies of public behaviour, but more on that later. 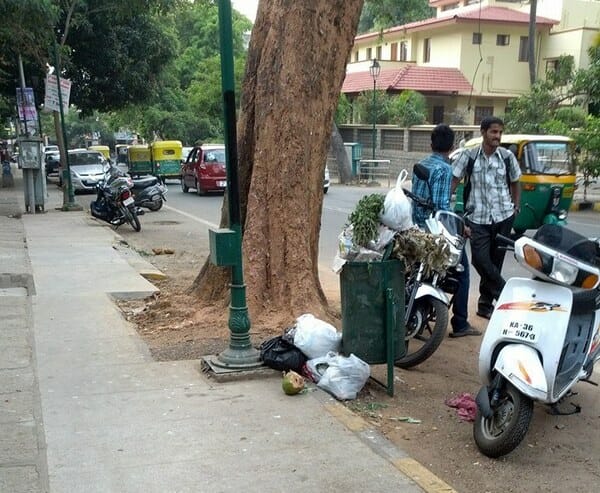 To make the fence look nice, and hide what was within, an option was to create an opaque screen with which the lower portion of the fence could be covered.  They figured they needed to cover about 18 inches of height from the ground to block the view to the mess within. Vandals had stolen the metal doorframe of this fence, and BESCOM had welded a makeshift door to allow its engineers access to the zone within. So, they needed to use a cheap material that was opaque, easy to install, and one that would not be stolen.

X had an idea – ‘Let’s use cheap colourful fibre-glass sheets to create a 18-inch high screen at the bottom of the fence. We will need about 30 feet of fibre glass sheets. But let’s first cut the fibre glass into strips 6 inches wide, and lineup 3 strips one above the other to make up the required 18-inch height’. V replied – ‘Fibre glass makes sense. It’s cheap, light and easy to install. But why such narrow strips? Why not just attach a 18-inch wide sheet that is readily available in a roll? Just buy 30ft and string it up. That would be quicker and more effective.’ X replied, with a glint in his eye – ‘To make it steal-proof !’

‘Narrow strips are unattractive to thieves as they are not reusable as a rain shelter. Also, fibre-glass has no resale value by weight or in cut pieces, only as a full sheet. Put a full sheet of 18-inch feet width and it would get stolen in a day; cut it into strips and make a few holes in them, and it is useless to others’. X smiled victoriously – he knew he had found the answer.

This invaluable insight had come to him from Muthu, the ragpicker – whom they had made friends with by now. V and X had made it a point to make friends with each and every stakeholder in this dump.  The crucial word here is ‘make friends’ – not ‘interview or survey’.  X had taken Muthu for a chai and cigarette and asked him a simple question – ‘What material fetches you nothing? What material will you not scavenge from a dump?’ He had carried some fibre glass strips to show him and test his idea. Muthu was emphatic – he had no use for these strips. Give him a full sheet and he could sell it to a slum-dweller to rainproof his home. But small strips, that too with holes in them, were absolutely useless.

Yessir! This was it!  Any design intervention using small fibre glass ‘strips’ would survive on the street! If Muthu did not want a material, nobody would. This was one of the many Eureka moments that V and X would experience on their mission. Want to find out what materials will not be stolen – why not ask the thief?! If you want to solve problems on the street, take design advice from those on the street.

Fibre glass sheets are easily available in several colours. For Rs 200, X had bought 5 sheets of dark-green fibre glass, and he began cutting them into strips. Right there, on the footpath. Now, doing something like this in the middle of the street on a working day afternoon would surely attract attention, and that was precisely his purpose. Soon enough, two car drivers of Wipro walked up to see what was going on.

These car drivers of Wipro and Times of India hang around all day, on call, and are a constant feature of the area. They had seen the team working in the morning, but they hadn’t really come forward to help – the work seemed too messy, and they were in clean clothes. X was very keen to get them involved, and this was his clever tactic. He asked one of them if he could borrow a pliers, as he said he was not sure how to bend wire to fasten the fibre glass to the fence. The recruitment tactic worked – soon there were 3 drivers attaching fibre glass strips to the fence, all demonstrating their wire-bending techniques to X!

Like security guards, waiting car drivers are another huge idle resource on the street – and they are good with their hands, as they know how to tinker with a car engine. As long as they are near their cars and available on their cellphone, they are free to do whatever they want. And this group of drivers fancied working with bending wires, fibre glass strips and pliers! It was clean work, and required skill.

One of the drivers took charge of the project, a car’s toolkit suddenly appeared, 3 more drivers arrived, each trying to outdo the other, and V and X soon found they had nothing to do!  One of the drivers, Mohan, said ‘you have worked so hard all morning, now it’s our turn. This is our street too, we will also keep it clean’. X glanced at V – this was too good to be true. Over 15 people had now worked on this spot since the morning, and all had joined spontaneously and voluntarily.

The cement work on the footpath had dried by now, so V and X gave it a coat of paint. And when the drivers were done with the fibre glass work, they took the silver-grey paint that V and X had brought along and painted the fence. The whole operation took them barely an hour, the fence was looking really pretty now, the mess inside was not visible any longer, and they had clearly had a good time.  When one driver got a call from his boss in the middle of painting the fence, he left very reluctantly – this was so much fun!

It was important to X and V that the drivers took pride and ownership in the fence and vicinity. After all, the biggest beneficiaries of the SpotFix were the official car drivers of Wipro and Times of India. The already crowded lane had been parceled into 6 parking slots that were jealously guarded by them – every inch of road space is used in these parts. Bangalore does not charge parking fees in city centre, so there are no official parking attendants either – as a result, parking is literally a free-for-all combat activity where winner takes all. And this garbage Spot occupied part of the road, and resulted in the loss of a parking space, or at least half a car’s space. This is a big deal. These things matter to drivers, and are often the cause of arguments and fights.

The drivers sit around all day – on call. Waiting to take their boss to a meeting, or rush a media team to cover a story. They play cards to kill the time, and the presence of garbage, and the accompanying stench and flies, directly affects them. The Times Now broadcast van, the one that broadcasts Breaking News footage of important events in the city, often parks on top of the garbage. The poor driver has no choice, so he closes his window and sleeps inside his van; he really hates this spot, but is apparently quite powerless to do anything about it. Politicians may quiver in fear when interrogated on Times Now, but the Times Now broadcast van driver seemingly has no such powers! X noticed that, after the fibre glass job was done, he had parked his OB van exactly over the reclaimed street corner!

By 4pm the place had been totally transformed. And a whole lot of people had got involved. This was getting infectious!

Was this enough? Time to declare victory?  Not yet!  X and V had another plan up their sleeve.

A journey from Bendakalooru to Bengaluru via Bangalore

Books are a great way to know the culture of a city. These four books on Bengaluru are must-read for people who want to explore the mindset of Bengaluru.

Specialisations and use of technology has changed the way healthcare industry works. Here’s a look at some of the new trends.