The India Biodiversity Portal is organising an invasive species campaign through the month of August 2015: Spotting Alien Invasive Species or SPAIS. India Biodiversity Portal (IBP) is an online, open-access repository of information on India’s biodiversity. It has already conducted several campaigns involving citizens in documenting, contributing and sharing biodiversity information from diverse parts of the country. With the SPAIS campaign, IBP and its partners aim to create awareness about, and to map the occurrences of, a set of widespread invasive species in India. The campaign will be conducted online at: http://indiabiodiversity.org/group/spotting_alien_invasive_species/show.

What are alien species?

Alien species are sometimes also referred to as non-native species or non-indigenous species or exotic species. These are species that have been transported to regions outside their natural range of distribution. Many alien species are intentionally introduced by people for food, timber, medicines, or as pets or ornamental species. There are also many other species that are transported by accident, for example, as hitchhikers on deliberately introduced species, or as passengers in ballast water.

Why are alien species of interest to us? 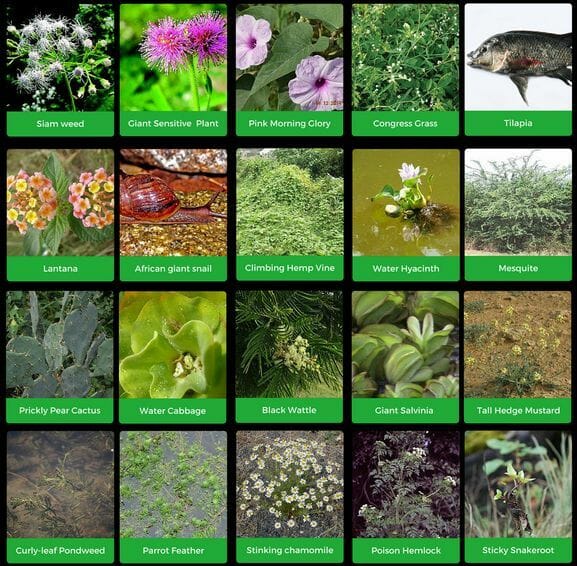 Once they have established in their introduced environments, some alien species can become invasive. This means that they are able to spread rapidly, and have undesirable ecological or societal impacts. A well-known example is congress grass (Parthenium hysterophorus), a widespread weed that was accidentally introduced from tropical America, and is a common cause of allergies in people. Another well-known example is water hyacinth (Eichhornia crassipes), deliberately introduced as an ornamental plant, also from tropical America, which now clogs waterways across the country.

Are all alien species invasive?

What is the significance of studying and mapping invasive species?

The rapid proliferation of numerous exotic invasive species of plants and animals poses a threat to native biodiversity, the structure of valuable wildlife habitats, and the survival of vital water bodies, and can have severe impacts on the country’s agricultural economy. In India, we still know very little about invasive species, let alone where they occur or the full extent of their ecological and economic impacts. Through this collaborative effort between researchers and citizens to map the distributions of these intruders, the Spotting Alien Invasive Species (SPAIS) campaign hopes to obtain important clues to the management and control of these problem species. Such information could potentially enable us to collectively answer questions such as: Are there certain habitats that are particularly vulnerable to species invasions? And, in time, to answer questions such as: How might a particular alien invasive species be expected to spread under a scenario of future climate change?

Ecologist, Dr Ankila Hiremath, from Ashoka Trust for Research in Ecology and the Environment (ATREE), has worked on invasives for over 10 years and is one of the organisers of the SPAIS campaign. She says, “Humans have always moved plants, animals, (and inadvertently, diseases) around the globe. But with growing global trade and travel, the rate at which species are being introduced to new region – whether deliberately or accidentally – is unprecedented. Not all these species are useful. Some of them, those that become known as ‘invasive alien species,’ can have serious impacts on the environment and on human wellbeing. Costs of invasive species due to losses in agriculture and forestry alone are estimated on the order of billions of US$ per year. It is much harder to quantify less tangible costs due to the loss of biodiversity and ecosystem services.”

The SPAIS campaign will be conducted in association with Weed Identification and Knowledge in the Western Indian Ocean (WIKWIO), IISER-Kolkata, University of Kashmir, Institute of Environment and Sustainable Development at Banaras Hindu University, the G.B. Pant Institute of Himalayan Environment and Development, Dakshin Foundation, Nature Conservation Foundation, Keystone Foundation in Kotagiri, and several others. The success of this campaign depends on participation by citizens.

Participate in this fun activity with friends and neighbours, with students, teachers, and colleagues; take a SPAIS walk, upload a photograph, tell a story!

About Hetal Hariya 1 Article
The author has not yet added any personal or biographical info to her or his author profile.

Beyond Carlton’s revamped website hopes to kindle the conversation between those citizens looking to address the topic of fire safety.

An intensive ration card cleaning drive has begun in Bengaluru, with door-to-door verification by officials. However, Fair Price Shops are chosen randomly, so all the shops will not be checked.

Landmark initiative of Karnataka High Court stops the destruction and degeneration of city lakes – over 400 lakes to be immediately protected and rehabilitated in an ecologically wise and socially just manner spread over 1200 sq. kms. of Benglauru’s urban region.