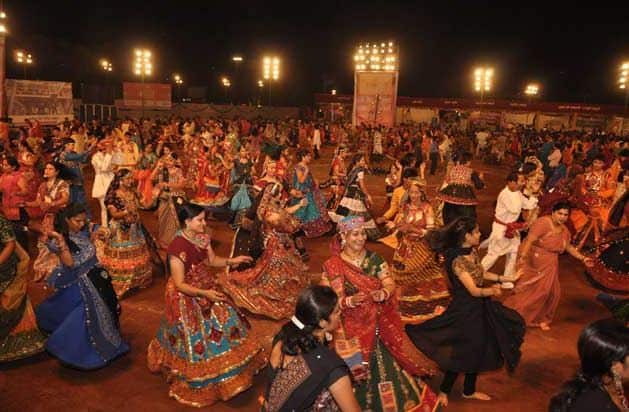 It was Navaratri and one of my friends invited me to join her in the festive celebrations. She stays in a gated community in Whitefield that had organised a Dandiya night. My friend was a part of the organising committee, they had planned the event well in advance and posted on their online forum, inviting suggestions (community participation!!). Residents actively participated in the discussion and the event came to life. There was celebration over the nine days of the festival.

As I walked through, a sense of celebration set in. The little ones were running and playing around in their ethnic wear and some flaunting it too. As I smiled and walked ahead, well dressed nanas and nanis were chit–chatting in groups. I moved towards the cricket ground where I had to meet my friend. She had got passes for me which I had to show at the security check point before entering. The open space was beautifully decorated: the music, lights, colours and people all added to the festive mood. More than a thousand people of all age groups danced to the traditional music. It was a night well spent and enjoyed.

With these memories, I returned home. On my way back, I was reminded of the days I spent in my grandma’s place. Navaratri celebrations would be held in the large open temple grounds and the entire community participated in the event, transforming the site into a shining example of an inclusive public space. As a kid, I really enjoyed the celebrations.

But back in Indiranagar, it seemed like any other normal day – no celebrations, a deserted street except near temples; people were just relaxing on their holiday. I wonder, what stops people from celebrating here?

A few days later, I saw my neighbour’s kids playing on the street. Each time a vehicle passed by, they moved aside and then continued to play. But the case of a kid playing in a gated community would be different, they play in a dedicated play area which is safe and hindrance-free. I soon realized it is the mere lack of space and not the busy schedule of urban dwellers, nor the loss of cultural values amongst the youth or smart phones, which stop us from celebrating or playing. We have simply lost those spaces of celebration, the space of fun, space for all.

More than 80% of the city’s population lives in ‘ungated communities’, there is an increasing divide in the quality of life, a stark difference in the infrastructure available. With more gated communities coming up, we will see a continuing rise in exclusive open spaces and loss of inclusive public space. It’s time for us to identify these spaces in our proximity and join hands with our neighbours to bring back the spaces we have forgotten and the experiences we are missing.

About Namratha Aroor 1 Article
The author has not yet added any personal or biographical info to her or his author profile.

Where pedestrians have the right of way

I now have to remind myself constantly, that I don’t need to scurry and that as a pedestrian I have as much right as any other resident using the road.