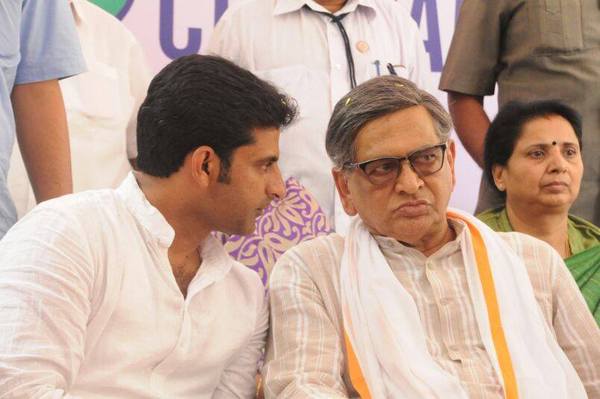 Rizwan Arshad’s entry into politics was well-planned and came in the natural progression of college union politics through National Students Union of India (NSUI) in the 1990s to mainstream party politics later.

His father R Q Arshad was an advocate and mother Shehnaz Arshad was a lecturer at Sheshadripuram college in Bangalore.

Rizwan Arshad became the first muslim be to elected as the KPYCC President in 2011. He defeated Priyank Kharge, son of Central Minister Mallikarjun Kharge, by a large margin. He however was alleged have rigged the elections, though Citizen Matters cannot verify this independently. In March 2013, he almost quit the INC for being denied a ticket for the Assembly elections, but was pacified later.

He has been playing an active part in state politics, by protesting against the BJP government for its ‘failure,’ along with other Congress leaders.

He was re-elected as the KPYCC President for the second consecutive time in January 2014 and won almost 21,000 of the 29,000 votes polled.

He hit the headlines for endorsing Rahul Gandhi’s statement that the ISI would exploit Muslim youth from the riot-hit Muzaffarnagar.

The ticket for Bangalore Central being given to a youngster from Rahul Gandhi brigade has raised many eyebrows. C K Jaffer Sharief, who was bidding for a ticket from the same constituency was quite upset. Rizwan filed his nominations in the presence of MLAs K J George, Dinesh Gundu Rao and N A Haris on March 20th, 2014. According to the affidavit submitted by him, he has two cases pending against him. He also has declared assets worth Rs 3.2 crore.

He has been campaigning hard ever since and has also had the CM Siddaramaiah campaign for him. Updates on his campaigning are regularly posted on his Facebook page.

In an interview, he lists out the issues that his constituency and city face – waste management, water, infrastructure, traffic and citizen safety. He also mentions his plans of how he would tackle these issues if elected, like ensuring use of JNNURM funds efficiently in areas BBMP lacks funds.

It remains to be seen whether this youth leader will be able to make his mark on voters of Bangalore Central this time, against a seasoned politician like P C Mohan.

Check what your MP has done: P C Mohan, Bangalore Central
P C Mohan: After losing Assembly, back to Delhi race yet again

In last two months, people saw BBMP becoming more responsive towards citizens’ queries and more transparent. Property tax collection was at its highest level in the last two months. TM Vijay Bhaskar who will continue to be the administrator till a new council comes in, shares his experience with Citizen Matters, in an interview.

What is the growth in assets of re-contesting candidates from Bengaluru?

Curious to know how much would be the asset growth of the candidates who are re-contesting? Here’s some data for you!