Many of you may be interested in building your home on a plot owned by you. There are hundreds of private layout developers in all parts of Bengaluru, advertising all over newspapers and television. Private layouts are being developed along all the main roads from Bengaluru towards Devanahalli airport, Hoskote, Whitefield, Sarjapur, Attibele, Anekal, Jigani, Kanakapura, Mysore, Magadi, Tumkur and Nelamangala.

Some of these projects are at a distance of nearly 50 kms from Vidhana Soudha. All layout developments have to fulfil legal requirements of the Land Revenue Act, the Land Reforms Act, the Town and Country Planning Act and BMRDA Act. As per the existing procedures these Private layout projects are approved / sanctioned by 8-9 Local Planning Authorities working under BMRDA as per the procedural guidelines framed by BMRDA and The Karnataka Town and Country Planning department.

The authorities to approve layouts are:

1. The Bangalore Metropolitan Region Development Authority (BMRDA) – for Bangalore Urban and Rural Districts and Malur Taluk of Kolar District excluding the areas covered by BDA, BIAAPA and other LPA’s. 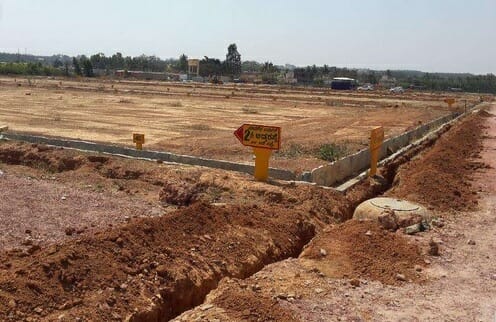 A layout being developed near Nelamangala. Pic source: Olx.in

Development of private layouts is going on in full swing around Bengaluru city since the inception of BMRDA as per BMRADA Act, 1985. The BMRDA and its local planning authorities have so far sanctioned more than 1500 layouts.

There are many instances of private layout developers taking huge sum from buyers of plots promising them various facilities and infrastructure but vanishing after the plot was sold, without offering what was promised. Many buyers fall prey after seeing attractive advertisements and struggle later, being unable to get either money back or minimum infrastructure.

Upa Lokayukta Justice Subhash B Adi had taken up a suo motu complaint against BMRDA based on an anonymous letter about a layout in Attibele in Anekal Planning Area which remains barren land since 2005. The Upa Lokayukta directed the Urban Development Department/BMRDA to provide details about approved layouts and the present status since inception of BMRDA.

As per the details provided by the BMRDA to Upa Lokayukta, a total of 1,364 layouts have been approved in BMRDA and its seven LPAs. Out of these,

There are also around 430 illegal layouts in BMRDA jurisdiction for which no sanction from the local planning authorities was obtained.

Increasingly, Layout developers are advertising layouts carrying an ‘Approved by BMRDA’ tagline to make the sites appear clear and more alluring. Often, Bangalore Metropolitan Regional Development Authority- (BMRDA) has little to do with the layout approval. Buyers should be aware that any layout approval should come from the Local Planning Authorities – LPA and not from BMRDA directly except the projects in Malur Taluk, Kolar district. BMRDA only frames rules to help these Local Planning Authorities with master plans. Buyers should check for related documents to ensure they are buying properties approved by the jurisdictional Local planning authorities.

The legal lacuna here is how the BMRDA can reclaim rights over the land after transferring it to the developer. Upa Lokayukta Justice Adi Says, “The 2005 circular is the reason for the sudden increase in the approval of layouts. There is no clarity in the circular about the next course of action when a builder fails to develop the layout. Moreover, the circular stipulates that after approval, the developer can sell 60 per cent of the sites. In some cases, builders were allowed to sell all the sites, but layouts still remain undeveloped.”

The Upa Lokayukta has directed the officials concerned to prepare an action plan to take action against the developers and also on amending the May 2005 circular.

In the above back ground, the state cabinet had approved a proposal in June 2014 to amend the relevant provision in the Karnataka Town and Country Planning Act (KTCP) to bring in stringent regulations for layout developers. Accordingly amendments were passed to section 17 of The Karnataka Town and Country Planning Act, 1961 during the Assembly session held in December, 2014. In section 17 of the principal act for sub section 2 the following is substituted:

(2) The Planning Authority may, within the prescribed period, sanction such plan either without modification or subject to such modifications and conditions as it considers expedient or may refuse to give sanction, if the planning authority is of the opinion that such plan is not in any way consistent with the proposals of the Master Plan.

Provided that where the Master Plans are not finally approved, in such cases the Planning Authority may sanction the layout plan as per the guidelines issued by the Government from time to time.

(2A) If the Authority decides to sanction the layout plans under sub-section (2), it shall sanction provisional layout plan in accordance with such rules as may be prescribed for demarcation and development purposes showing the sites, street alignment, park and civic amenity area and any other infrastructure facility including the arrangement to be made for leveling, paving, metaling, flagging, channeling, sewering, draining, street lighting and water supply to the satisfaction of the Planning Authority and local authority. One copy of such plan shall be marked to the jurisdictional local authority. The owner shall relinquish the roads, parks to the local authority and Civic Amenity areas to Planning Authority through registered relinquishment deed free of cost without claiming any compensation.

Provided that no Commencement Certificate or licence shall be sanctioned or issued for buildings on sites in the layout unless the final layout plan is issued.”

How the above amendments are beneficial?

(1) Private layout developers can no longer release sites to the buyers without completing all necessary infrastructure work. The process of releasing 60% of sites for sale at the now existing plan approval stage will be discontinued.

(2) Section 17-sub-sections (2), (2A) and (2B) of KTCP Act that deal with layout approvals will be tweaked. The end result of this change in the rule book would mean: developers of private layouts will have to complete all necessary infrastructure work like roads, water supply and sewerage lines, electricity connection, relinquishment of parks and open spaces to the planning authorities, only after which the site allotments will be allowed. The developer has to create the infrastructure in a manner where buyers can go in for immediate construction after registration of sites.

(3) After the amendment of section 17, the LPA will first sanction the provisional layout plan, so as to enable the developer of a layout to take up various works and other procedures to be followed for development of layout as stipulated in sub-section (2A) of section 17.

(4) Registration of all sites will have to be taken up only after 100 % development of the layout. At this juncture, all infrastructures and facilities will be available in the layout and buyer of a site can immediately take up the construction of house soon after registration of the site.

Who have to take steps for sincere implementation of the Amended Act?

(1) The Urban Development Department, Government of Karnataka, the Director of Town and Country Planning and the BMRDA should see that all the Local Planning Authorities under them understand the importance of amending section 17 of KTCP Act, 1961 and implement the same strictly.

(2) All Local Planning Authorities will strictly follow up the development work in the layout projects sanctioned by them provisionally as per sub-section (2A) of 17 of KTCP Act, 1961.

(3) All Sub-registrars in the jurisdiction of LPA should not take up any sites in the Layout without the Final Sanction of the Layout by LPA.

(4) The Inspector General of Stamps and Registration should instruct all sub-registrars under him not to take up registration of sites in a layout without the Final Sanction of the Layout by LPA.

With fraudulent realty companies mushrooming in the city’s property market, the amendment to KTCP Act comes as a welcome move. Many buyers fall prey after seeing attractive ads and struggle later to get money back or infrastructure in the layouts. The New amended act protect the buyers interest provided it is implemented sincerely by various Government Departments.

Other press reports and news items

About Ajit Nagesh Naik 1 Article
The author has not yet added any personal or biographical info to her or his author profile.

Currently, BBMP’s per capita revenue is well below the norms set by the High Powered Expert Committee for urban development.

Staff salaries are up to 70% of the cost, but running a school involves a plethora of expenses that don’t stop just because students are studying online, says a school administrator.

Builder L&T under the scanner

Competition Commission of India is investigating the company based on a complaint by residents of South City apartment, Puttenahalli.