Current scenario of water availability in Bangalore seems to be grim with ground water almost over and tanker mafia twisting our arms. Last year’s indication of dry weather prompted our apartment to find out an easy way of collecting rainwater as a proper rainwater harvesting system was not made initially. 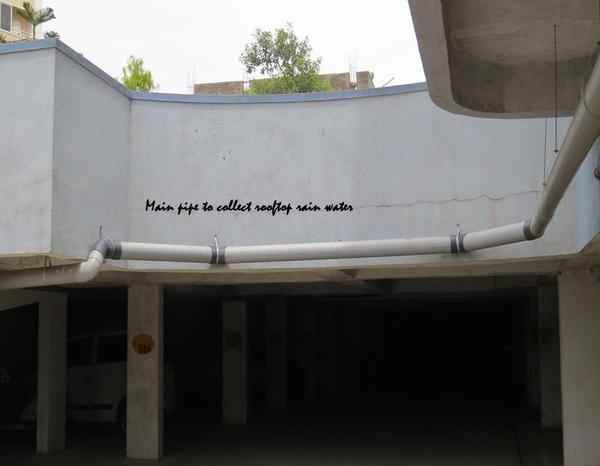 Zephyr Block of Suncity Apartments, Ibblur, thought of using the flat roofs of the building to collect rainwater. Roof rainwater pipes were attached to a main big pipe and then to a small tank.

The initial water collected in the small tank and after a while the clean water starts going into the main underground tank. This takes care of the initial dirt and pollution coming down with the rains.

This system was made last year after the rains, so it did not give much results. On this year’s first thunder storm on 2nd June, it rained very heavily and the water collected was about four tankers worth of clean soft water. Using that water for washing bathing was a wish granted after a long time as the water we currently use is very hard.

If a night of rains could do that what would the entire rainy season give. It can give us water self-sufficiency for at least some months. Kudos to the team of Zephyr block who worked hard to get this system working. Every building in the city can use their roofs for some type of rain water harvesting and Zephyr people have shown the way.

What do the rain gods have in store for Bengaluru?
Conserving rainwater
Replenish aquifers with rainwater harvesting

About Sushmita 1 Article
The author has not yet added any personal or biographical info to her or his author profile.

A vocabulary for public infrastructure in Bengaluru

Using international vocabulary for city infrastructure will help citizens understand the situation instead of creating a new, confusing language of design

To whom does public space belong?

Public spaces are subject to all kinds of violations. One can see illegal and dangerous violations under High Tension Lines in Koramangala.

Why does every election leave the affluent and educated voters unmoved? Could it be that some of them see no need to vote?