A couple of weeks ago, towards the end of October 2015, many concerned residents started observing raw sewage entering Ibbluru park at Sarjapura Road – ORR Ibbluru junction. It was not clear what was driving this. There had been unseasonal rains prior to this too, but it had not led to any adverse effects on the park.

What triggered this destructive course of events? To understand it better, it is necessary to understand the chain of events that took place in the last five years.

Local residents fondly recollect, seeing a beautiful quiet lake at Ibbluru up until 2009 – it was small (around 12 acres), but peaceful and tranquil. Fish were aplenty and a local fisherman, Narayan, used to earn his livelihood there. There were also plenty of birds frequenting the lake. 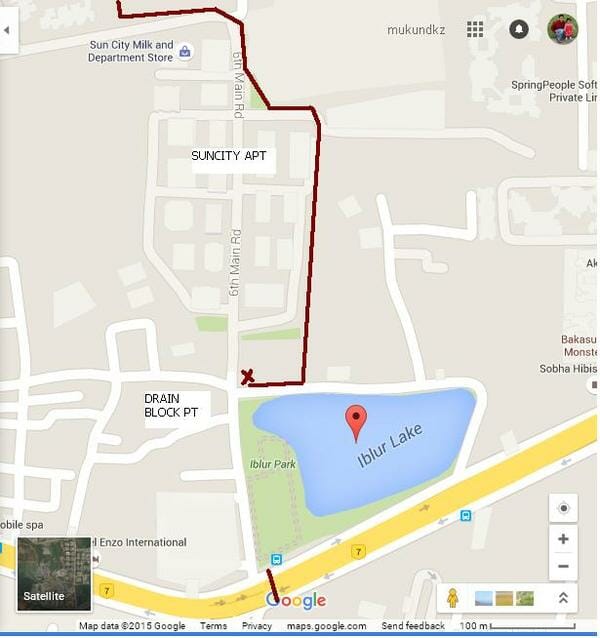 All that changed abruptly about five years ago. In 2010, the problem started with the completion of the Ibbluru flyover, which created a dedicated underground culvert directing sewage from Haraluru and Ambalipura into Ibbluru lake.

The fisherman, Narayan, cried foul. Within a short span of time, all the fish died and the lake ended up as a sewage and garbage dump. From the lake, the sewage passed onto an open drain passing via Suncity/ Genesis/ Euphoria apartments and on to Bellandur lake. This arrangement continued for the last few years.

For the last many months, the increased flow of sewage (thanks to rapid urbanisation in upstream areas of Ambalipura and Haraluru) and blockage in the drains down-stream had caused choking and flooded raw sewage into Suncity apartments and downstream areas, including the road leading to Embassy lakeside project.

The residents of Suncity apartments complained several times to their Corporator (HSR Layout) and MLA (Bommanahalli). The Corporator, Gurumurthy, finally arrived a few days back. At his behest a makeshift solution was made by constraining the sewage flow coming out of the lake.

Flow dynamics follows a very simple equation. If the out-flow into Suncity was constrained, where would the sewage go? There is a park next to the lake, maintained by the local Rotary group (Rotary Club of Bangalore, Lakeside). Which is the most convenient choice? Whether to harm the people using the park, or harm the 1000+ residents of Suncity?

The natural choice was the park. The sewage now floods onto the beautiful Ibbluru park. 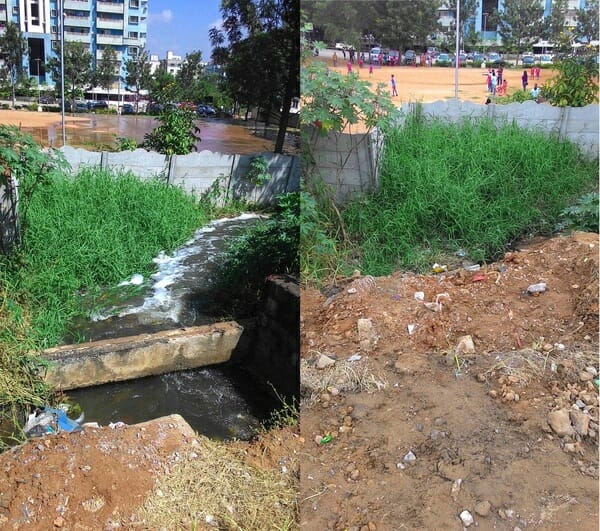 Storm water drain next to Ibbluru lake, before and after the encroachment. Pic: Mukund Kumar

And this is how the park looks now: 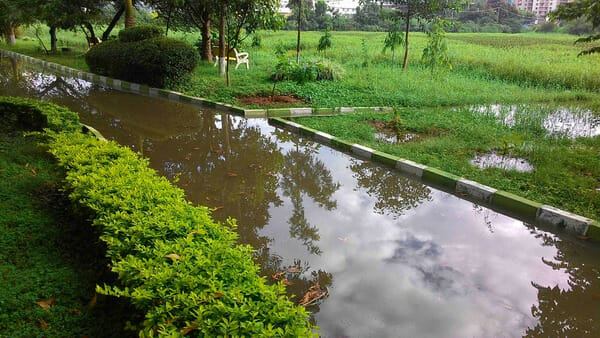 Without realising the futility of such short-term measures, the administration has refused to address the core issue of sewage. Rapidly increasing volumes of sewage need to be diverted to drains that are straight or curved in nature without any angular bends that help increase blockages.Currently, the storm water drain takes many 90 degree turns, which is causing most of the issues. The sewage needs to be treated to the best extent feasible, to reduce the burden on drains.

So far, everybody has been looking at the issues of Ibbluru lake, Ibbluru park and Suncity apartments in isolation. Residents, unable to rely on the administration and the political class, are left with no choice but to pit themselves against each other, often having to engage in illegal activities.

Local residents have now decided to come together and pin responsibility of working with the BBMP/ BWSSB on the Corporator Gurumurthy and MLA Sathish Reddy, to ensure that there is a comprehensive solution that addresses the needs of Ibbluru Lake, the Park and Suncity community.

But, is it too late already?

Volunteers of Youth for Seva are helping residents of Bilekahalli understand waste management and implement it.

Bengaluru needs more roads, and elevated is the way to go

One can always argue against the manner in which the government takes up certain projects, but elevated corridors as a concept cannot be ruled out, argues Nitin Seshadri.

A hundred years ago, Bengaluru beat the plague; here’s how

Over a century ago, Bengaluru faced the plague, a far bigger threat than COVID-19 today. But the administration’s proactive, well-planned measures not just saved the city but also strengthened its public health system.