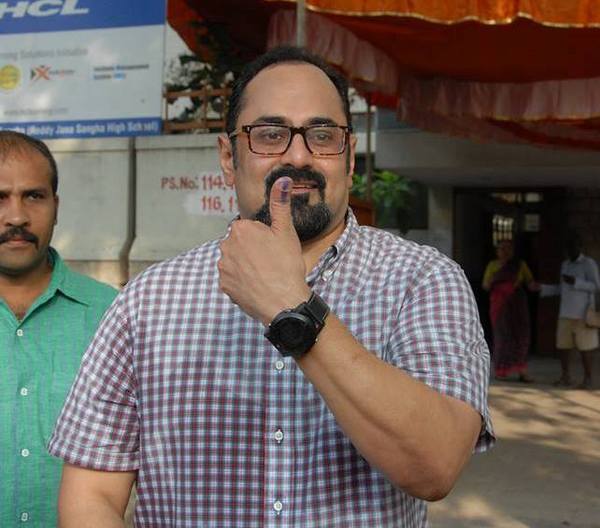 He has been an opinion leader on social media, with good number of followers on Twitter. Being a techsavvy politician, he is the hot favourite among the online community. He has been asking people to come out and vote. And he has expressed his support to BJP in the BBMP election 2015. Citizen Matters sent a few questions to Rajeev Chandrasekhar, Rajyasabha MP from Bengaluru who also founded Namma Bengaluru Foundation that works in the area of civic involvement in the city. Here are the questions and Chandrasekhar’s answers.

Why are you putting in so much effort? We understand you are spending crores. What is the impact you expect?

The impact is that we get higher turnout, less apathy and better corporators who reflect the citizens desire for reforms transparency and accountability.

Are you supporting individual capable candidates? It is said many aspiring candidates don’t get tickets because of the “price” of tickets.

No, I am endorsing manifesto and party with credible leadership to tackle corruption. i.e. BJP.

Personally, what do you want to achieve yourself or make happen in Bengaluru?

I want as do millions of citizens – a city govt that is non corrupt, focuses on statutory planning for city, and creates institutional space for citizens/ RWAS to participate in planning and development of city.

Are you supporting any party this time, like you did during the national elections last year?

Yes the BJP. My appeal is enclosed. 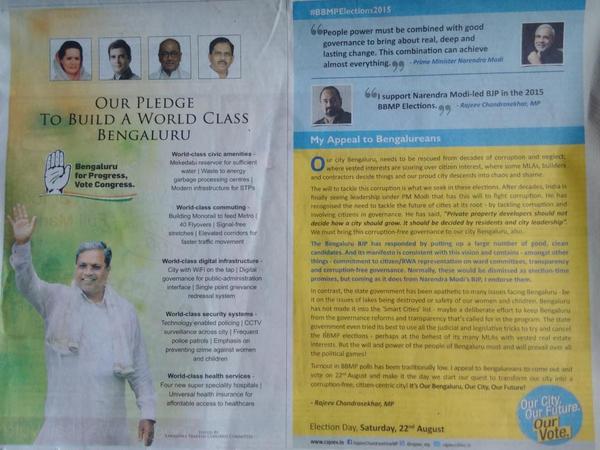 Many of your banners exhorting citizens to vote, have quotes from Prime Minister Modi. What does it indicate/ symbolise?

It indicates the political and governance philosophy of Narendra Modi which is similar to mine. i.e city’s development is not to be driven by property developers but citizens.

People are very frustrated with the quality of candidates in many ward. That is also one reason people may stay away on poll day. What do you think of this?

Frustration is the easy way out. If you care for Bengaluru get involved pick the best party and cast your vote. Don’t use the age old cynical as excuse to go on a weekend holiday.

Compared to the last election, do you think the anti-corruption idea has any resonance at a ward level?

Research is showing that corruption is the Number One issue in the minds of voters and citizens. It’s what bothers them most about city government.

What do you think of chances of the newer/smaller parties like Loksatta? (AAP is not contesting, but there are some volunteers standing as independents)

I think their presence is deftly changing the discourse. As a result of my campaign, all three major parties have taken an oath of integrity.

How do you think citizens can be encouraged to engage with the system post elections?

Through media and though their RWAs. And if BJP wins, through their ward committees.

Ward committees have very rarely been set up or functioned. The ward committee commitment that I seek is to have RWA reps on those committees so that true citizen representation is enabled

Also, any thoughts on area sabhas?

Further division of wards into Neighbourhood Areas is possible as I had recommended in abides recommendation. But the main starting point is a truly representative Ward committee.

You are saying you want a city government that is not corrupt, and that you are supporting the BJP. The last term in BBMP saw so many scams – from midnight tender to fake garbage bills. What’s your take on this?

My ‘take” on BBMP corruption is this – urban local bodies like BBMP are often the worst examples of corruption and misgovernance. It’s time for deep reforms here and it requires political leadership with will and desire to do it. That explains my support to BJP despite the poor performance of BBMP in the past.

Children aren’t often welcome at cultural performances where the audience are expected to be disciplined. But Jagali in JP Nagar aims to change just this, by catering to family audiences. In this edition of Citizens Live, Saraswathi Anand, whose living room serves as Jagali, talks about this informal space