Over the past 15 years the population of the city has increased more than 2.5 times, from 4 million to close to 10 million, the per capita garbage generation on an average has doubled, from 0.25kg/capita to 0.50kg/capita, and the composition and fabric of garbage has drastically changed, from about 80% compostable organic waste and a great part of the 20% being recyclable, to less than 60% compostable and a great part of the 40% being rejects, that will have to be landfilled because they are mixed waste. 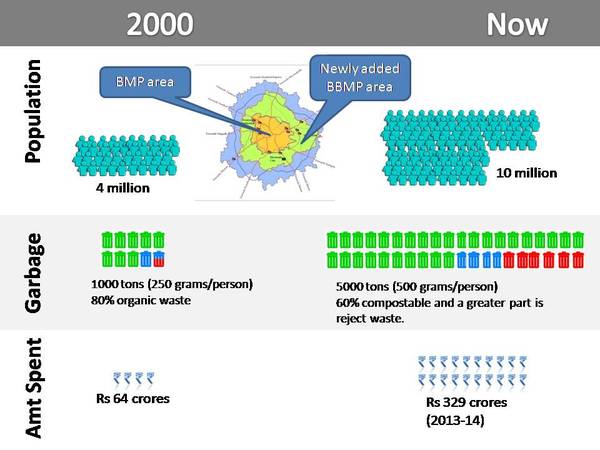 Graphic: Meera K. Information is based on data provided by BBMP, estimates and some assumptions.

With dumping at Mandur stopped, and some waste going to Mavallipura against villagers’ wishes, and none of the proposed processing centres ready, are we heading towards chaos?

It has been 15 years since the Supreme Court Committee’s report on Solid Waste Management presented a clear framework for waste management for Class I cities. Despite these guidelines and several concerted efforts by various non-governmental groups, government initiatives like BATF, ABIDE and judicial intervention, BBMP has responded with knee-jerk responses without addressing the issue at hand or planning for the future increase in garbage. Can Swacch Bharath change the attitude and functioning of the BBMP? Can it change the total disregard BBMP has for court directives and CAG reports?

After Mandur’s gates shut down for the city’s garbage from December 1st, many piecemeal efforts were being attempted by BBMP, whether it is getting the seven waste processing units ready or reconsidering the phased out idea of large containers to collect garbage. But at the end of the day most citizens do not know that, as per the HC directive, their garbage has to be segregated at source.

It is difficult to investigate the exact reason for BBMPs state of affairs. Before big words like mismanagement, callousness, ineptitude and corruption arising of officials-contractor- politician nexus are cited as the reasons for BBMPs slow paced reaction on such a critical issue in the city, let us examine some basic questions that arise.

Does BBMP lack the basic know-how of waste management?

Over the past two decades there have been several expert committees set up to guide BBMP to streamline the whole waste management process. The basic to-do list being the samem no matter who recommended it; scientific handling of waste as per the Supreme Court Committee recommendations, academic publications by IISc, A future without landfills, IIMB’s suggestions on ways to reduce waste reaching landfills, policy on solid waste management by their own Environment Cell and many many more. However BBMP has been unable to get their head around the increasing population, per capita waste generation and composition of waste and at the same time deal with the existing mess.

State government allocations and property tax make up most of BBMP’s funds available, and since 2011 BBMP also included solid waste management cess in property tax collected. In a first of its kind, in the 2014-2015 union budget, under the 13th Financial Commission Bangalore was allotted 100 crores to sort out its garbage issues. BBMP has earmarked a whopping 415 crores for solid waste management in its budget this year. The state budget proposes six more waste management units to be implemented through Karnataka Urban Infrastructure Development and Finance Corporation (KUIDFC) at 270 crores.

With respect to solid waste management, where does the money go? BBMP, on an ongoing basis, spends mainly on collection and transportation of garbage. In some cases acquiring land for waste management is another aspect that BBMP spends on. In most cases, BBMP does not set up processing plants, so does not have any incurring cost of the unit, only tipping cost per lorry is paid and this is already included in the transportation contracts.

In fact as T R Raghunandan, an ex-IAS officer who has worked on waste management, points out in a blog, the amount budgeted is always way more than actual spending. In 2011-12, BBMP budgeted 98 crores for solid waste management, but based on its spending, slashed it down to 39 crores, and based on that, the budget estimate for 2012-2013 was 63 crores.

Although officials say funds are insufficient and the SWM cess is not enough, the CAG report in the following article of the series shows that by dragging its feet, BBMP lost crores worth of financial assistance. The bottom line is, there is no dearth of funds to manage the city’s garbage.

Was action was taken against BBMP for dereliction of duty?

What BBMP did in the last 18 months

In 2012, in response to several public interest litigation (PIL) petitions filed by Kavitha Shankar, advocate G R Mohan, other individuals and NGOs including Environment Support Group (ESG), the Karnataka High Court ordered issue of notice to the State government, Ministry of Environment and Forests and various civic agencies seeking directions to ensure that solid wastes are segregated at source by citizens of Bangalore for proper solid waste management. The court also directed the state and municipality to identify and develop other areas for waste processing. Other directions by the court include short term measures to clear up accumulated garbage, ensuring landfills are not permanent waste management solutions, involvement of voluntary organisations and pay KCDC the attention it requires to revive itself.

The first response to the court’s directions was setting up of collection centres in the wards, this too after concerted effort by several groups. There are more than a dozen of dry waste collection centres in the city now. The case has also nudged the government to appoint a Special Commissioner for Solid Waste Management, Darpan Jain. A division bench that is following the progress of the implementation also directed the government not to create dumps like Mandur anywhere near the city. The frequency of hearings has increased to one a week with the number of similar petitions that have been filed on this issue.

In spite of all this, the fact that a newly set up waste processing plant handles 450 tonnes of mixed waste is not a good sign, especially when the court has directed segregation at source.

Much coffee-table talk in Bengaluru is about how the city has such poor planning. This Citizen Matters investigation exposes how unqualified BBMP and PWD engineers get into plum sanctioning positions.

Entrepreneurs start a breakfast eatery. People object, citing zoning rule violations. BBMP acts quietly, and the eatery’s owners get relief from a court. Three protesting citizens get notices over their own homes’ building approval. Welcome to Koramangala, a happening place in the city!