Sunday September 20th was a day like no other at HSR Layout. What was different you ask? For one, residents in the area came out to enjoy the peace and quiet on the streets in the area. Buses, cycles and feet were the most commonly used modes of transportation. Ask most participants what they thought of the initiative, and you would most likely get a resounding yes to yet another edition of the event.

All was not well however. Some citizens compared the day to a bandh of sorts, since their freedom of movement was compromised. Many had to walk a distance that they would otherwise have used their cars or bikes for. In some cases, those attending to medical emergencies, had to stop at the various checkpoints to explain that using their vehicle was a necessity.

In a nutshell, Open Streets Bengaluru was greeted with mixed reactions. Those praising the initiative are looking forward to yet another edition of it. Those on the other side of the fence, are questioning whether it was a prudent move, considering the inconvenience it caused.

So what happened at Open Streets?

On the day of the event, roads in Sectors 1 to 7 in HSR Layout were closed to vehicular traffic from 6 am till around 7.30 pm. This meant that residents of the area, or those looking to commute through the area, had to resort to using public transport, or walk, or cycle. BMTC had also made arrangements for additional feeder buses to cope with the demand. 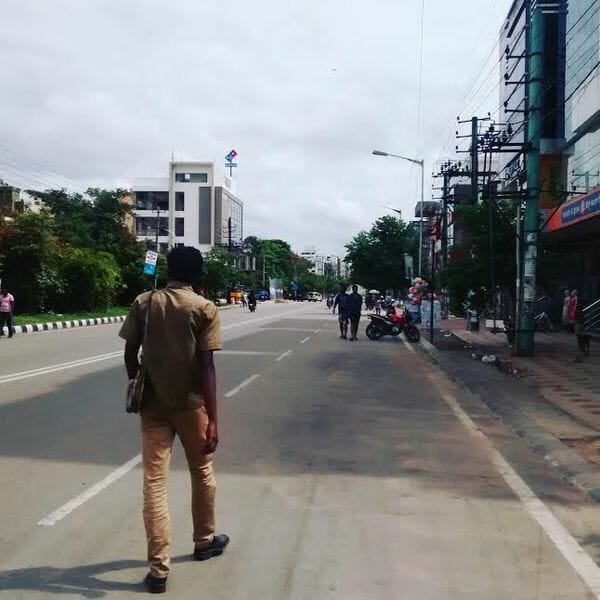 A bus conductor walks along one of HSR’s empty streets. Pic: Abhishek Upadhya

Some roads were demarcated as activity areas, and these saw a host of activities including workshops on clay modelling, storytelling. Several residents, as well as some people from other parts of the city, came with their children to cycle and play on the empty streets. Some children took the opportunity to test their skateboards.

BMTC put up a skit ‘Bus Banthu Bus’ at various locations in the area. Samarthanam had organised a Blind Cricket match to raise awareness. The team from Cycle Day too had a host of activities planned through the day.

In addition to the 500-odd police personnel who were deployed on the day of the event, several DULT and BMTC officials were coopted for each of the sectors. Around 200 volunteers from RWAs in HSR Layout too lent a helping hand.

V Manjula, Commissioner of Directorate of Urban Land Transport (DULT) which was one of the main organisers terms the event a success. She says, “While we did not expect 100% compliance, there were many people voluntarily participating in the event. Many resisted taking out their private vehicles, and opted to take a bus instead… What was really interesting to see was that there were some children who were playing the part of volunteers too. I was privy to one such occasions where they stopped a two-wheeler and explained the initiative to the rider.”

Ekroop Kaur, the Director of BMTC has this to say, “I have to say that the turnout was very good. We had more than 25,000 people using BMTC services on the day inside HSR Layout alone. The event certainly drove home the fact that people can uses buses for their commute”.

For one day, HSR Layout which typically ranks among the most polluted areas in the city, was an oxygen-rich lung space. DULT says that pollution level results that it got from the Pollution Control Board (KSPCB) for the day of the event stated that particulate matter showed a decrease of 31%, and ambient noise, a reduction of 11.5%. This data is in comparison to the pollution levels on the previous day, Saturday September 19th.

Residents get a flavour of public transport

Brigadier Murthy, President of the HSR Sector 2 RWA was a volunteer at the event. He says that the event was a success in terms of raising awareness about public transport, and educating citizens about alternate means of mobility.

Brigadier Murthy adds that if he were to rate BMTC on its services on the day of event he would give them 100%. And this is certainly a testimony to the planning that went into BMTC’s operations for the event.

Ekroop Kaur explains, “From the operations point of view, we tried our best to ensure that every area was given coverage. We had bus stops every 200 metres or so. Residents were also allowed to get off where they wanted, instead of only at the bus stops. We issued tickets at reduced prices; for some long-distance routes people had to pay only about half or even one-third of the regular rate. All of this certainly helped in giving citizens a flavour of how public transport could be.”

Many folks said that they were using public transport after many years, some even for the first time. This opens up the possibility that they may just become regular bus commuters. The same applies for those who ventured out on their cycles.

The BMTC chief adds, “This event also helped us gauge the demand much better. We are in the process of starting new routes that run through HSR, as well as introduce some of the feeder routes that were popular.” If BMTC sees this through to fruition, residents of HSR can certainly consider BMTC buses as a more dependable mode of transport in future.

What the critics have to say

Brigadier Murthy concedes that the organisers could have planned the event better, both in terms of raising awareness about the event, as well as the execution. He says that while residents of apartments form a chunk of both the human and vehicular population, not all of them cooperated even though they were informed about it beforehand.

While he commends BMTC and the Traffic Police for their contribution to the event, he says that it would have helped ease the tension, had the personnel from Law and Order taken a proactive stance as well. He was witness to several heated arguments between that naysayers and the volunteers, where the police stood by as mute spectators. Here are some problems faced generally by people:

Manjula laughs as she adds, “HSR Layout also saw the maximum number of medical emergencies that day. We came across several people who stated they had life-threatening issues.” That said, she adds that the ambulances on duty mostly had to administer first aid for minor injuries.

What next for Open Streets?

While there has been a lot of conversation around what went well and what did not, many citizens are not averse to the idea of a similar event, so long as it is planned better and people are not hindered too much. Reports say that RWAs from Koramangala and Whitefield have evinced interest in rolling out a similar campaign in their neighbourhood.

Manjula says that while there is currently a backlash from citizens on another edition in HSR Layout, DULT is in talks about organising it once again in a few months. She says, “For Cycle Day as well, it was only after multiple editions that people started embracing the idea. And now, there are Cycle Days being organised in multiple locations across the city on the same day.”

She adds that DULT has collected feedback from residents in the area and that they will analyse the responses to understand what can be done differently for future editions.

So what can be done differently?

All said and done, Open Streets was an experiment to see the viability of alternate modes of transport. The first of its kind in Bengaluru, the event was bound to have teething troubles.

As Ramesh succinctly puts it on his blog, “In the overzealous effort to make it a success, it became an event of exclusion, instead of becoming an event for inclusion. As a lot of people pointed out, in an attempt to assert freedom, it did encroach on others’ freedom.”

Following the event, a Facebook group called HSR Open Street – Suggestion Box has become a forum where citizens have taken to sharing their criticisms and feedback about the event. Some of the suggestions put forth on this group and on other forums are listed below.

To the critics who may be skeptical about yet another edition of Open Streets, Manjula has this to say: “It is only one day. Forget about your vehicle. This event is good for you and good for the city. Please come and participate.”

There are a lot of small initiatives that everyone can take up to bring forth a huge difference in the society. Take a look at some.

Our forgotten mode of transport

Cycling is definitely a hard slog up some of the slopes of Bangalore’s roads. And even as some cycle out of necessity, there are others who cycle out of choice.

For cars to fly over Agara and Iblur

Some questions, comments and suggestions on two grade separator projects at the Agara and Iblur junctions in south-east portion of Bengaluru’s Outer Ring Road, with some alternative traffic flow options.